On the backstreets of Madrid where immigrants, prostitutes, and ordinary people mingle two putas will establish an unusual friendship. Caye (Candela Peña), an enigmatic local girl who is visibly concerned by the fact that illegal girls would work a client for 10 Euro, and Zulema (Micaela Nevárez), a beautiful mother from the Dominican Republic who dreams of bringing her son to Spain, will discover that in a world where everything has a price you can not buy happiness. 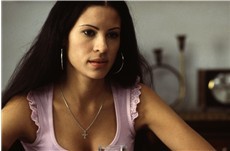 Caye works the streets around a low-key hair-salon where the native "street-workers" often discuss the impact illegals have had on the "industry". Gone are the times when men would flock to pay 100 Euro for a quick session-demand is not as strong as supply and everyone is visibly concerned. Even Caye who used to fantasize about getting a new set of breasts now only dreams that her future boyfriend would pick her up after work.

Zulema gives "free-sessions" to a local man who has promised to provide her with working papers. But instead of getting closer to the coveted papers Zulema often finds herself with painful bruises-the man has a strange "hobby". Overtaken with fears about a possible deportation the young Latina begins to lose hope.

A sinister tale about life on the streets of Spain Princesas (2005), Fernando Leon de Aranoa's (Los Lunes al Sol a.k.a Mondays in the Sun) latest film, often feels like a documentary. Yet this is an extremely humane film, one that puts greater emphasis on societal virtues than what you would normally expect from a production where prostitution is so openly addressed. From the ongoing humiliation Zulema is forced to endure, all in the name of granting her son a better future, to the weekend lunches Caye would have with her family Princesas is also a film of heavy contrasts.

It strikes me as being rather odd that Spanish cinema has so quickly outpaced the rest of Europe when it comes to films that deal with provocative social themes. A new generation of Spanish directors has unceremoniously taken over what used to be a predominantly French specialty: cinema-verite. With films such as Iciar Bollain's Te doy Mis Ojos a.k.a Take My Eyes (2003); Joaquim Jorda's 3-hour long De Nens (2004), and Pedro Rosado's Agua Con Sal a.k.a Salt Water (2005) among others there is a fresh breeze blowing in from the Iberian peninsula.

Fernando Leon de Aranoa's Princesas most certainly belongs to the same group of films mentioned above. Even though occasionally the harsh tone of the film is softened up a bit with quirky jokes the overall feel in Princesas is that of desperation, perhaps even doom. The Spanish director successfully reaches to the bottom of a small community where women long for the same things "normal" people cherish. Only each day they must return to their "jobs", the ones that have taken so much away from them.

This is certainly one of the easiest reviews I've ever had to write! Presented in its original aspect ratio of 1.85:1 and enhanced for widescreen TV's Princesas looks immaculate. Exceptional degree of detail, great color reproduction, spectacular degree of contrast, and a print that does not reveal even a tiny piece of dirt/damage transform this DVD into the complete package. The transfer is simply fantastic, pure perfection! PAL-encoded, Region 2.

Presented with a Dolby Digital 5.1 Castellan track and optional English subtitles (as well as HOH Castellan track) the audio treatment matches every bit the marvelous video presentation. Crisp and clear sound, great use of the rears, a very delicate mix of use and speech is what you will find here. To sum it all up I could not detect anything here that might detract from your viewing experience. Solid job!

Princesas comes in a lavish double DVD set as most extras appear on disc 2. Unfortunately they do not carry English subtitles. On disc 1 you will find a commentary by director Fernando Leon de Aranoa and Cast and Crew info while on disc 2 you will find La Construccion del Reino, Como se Hizo, Storyboards, Escenas descartados, Trailer, Galleries, and the Music Video to the film.

It is a shame that Princesas is yet to make it to US shores. But…fear not! This spectacular Spanish double DVD set delivers all the goods and more. This is powerful Spanish cinema at its best where tough issues are being dealt with in a most respectable of manners. I can not recommend highly enough!