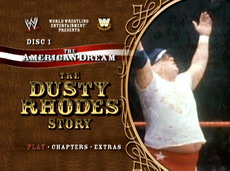 "I've wined and dined with kings and queens, and i've slept in alleys and dined on pork and beans!"

When it comes professional wrestling, i'm a casual fan. I remember being dragged to some events before the WWF/E hit it big in the mid-80's, but I wouldn't live and die by it. After Hogan helped blow up the WWF/E, I started watching with more frequency. I mean, how could you not? It was EVERYWHERE. Once the wrestling "fad" started to wane, so did my interest (well, I also had other things going on in my life too). Regardless, I had no idea who Dusty Rhodes was nor did I know how vital and essential he was to professional wrestling.

The latest in the WWE Legends line, "the American Dream: the Dusty Rhodes Story", is three disc set contains the standard slickly-produced documentary along with a ton of matches, vignettes and promos. Disc one starts with the documentary that runs one hour and twenty-three minutes long. It moves pretty briskly and if you blink, you might miss a fact or get confused since Dusty changed promotions, particularly in the later days, more often than Paris Hilton changes home video partners. We're told that Dusty was born in Texas and when he was eight, he was diagnosed with Osteomyelitis. Even though he never had it operated on, it didn't slow him down or stop him from playing baseball in Little League and high school. When he hit his third college, West Texas State University, he continued playing baseball and football alongside future wrestlers Ted DiBiase, Stan Hanson, Tito Santana, Dory Funk, Terry Funk and Tully Blanchard. Once he hooked up with Joe Blanchard, his early mentor, and made seven hundred dollars after one match, he decided that he was going to be a wrestler (even turning down a chance to play for the Miami Dolphins to wrestle!). After wrestling in Texas, he heads up to St. Louis, where he hooks up with "Dirty" Dick Murdoch in St. Louis to became one of the greatest tag teams in wrestling history. After spending 360 days with Murdoch in AWA, he decided to wrestle for the Florida Championship Wrestling promotion and Eddie Graham. It was there he became "the American Dream" and went from a vicious heel, to one of the greatest faces to ever wrestle in a Florida armory.

When Eddie Graham and Vince McMahon Sr. decided to have Dusty square off against "Superstar" Billy Graham at Madison Square Garden, it was one of three of the greatest matches that the MSG has ever hosted. Unfortunately, only two are included on this set - their first match in September 1977 and their third match, the "Texas Bull Rope Match". Both Rhodes and Graham consider these three of the best matches they've ever wrestled. When he headed back down to Florida, he became involved in a rivalry with Harley Race along with a quest for the NWA World Heavyweight Wrestling championship. They talk about how brutal the road schedule is and how much charisma Rhodes has, along with his fantastic mic skills before getting into his legendary rivalry with Ric Flair and the Four Horsemen. 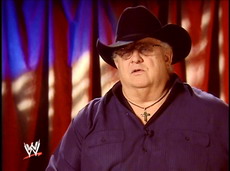 After heading back down south, he helps book for Jim Crockett Promotions and is (wrongfully) blamed for its eventual collapse. From there, he joins the WWF, where Dusty's popularity continues and he becomes "the common man" - a man everyone can relate to. During one of Dusty's matches, Vince comments to Bruce Prichard that the one thing that was missing from Dusty's ring attire was...polka dots. There was a slight controversy as to whether it was a "rib" on McMahon's part or not, but Dusty took it and ran with it - even getting manager during this time, Sapphire. During his rivalry with Ted DiBiase, he loses Sapphire, but gains his son, Dustin, as a tag partner. From there, he's offered "the keys to the store" and heads back to WCW as a booker. One of his favorite moments was putting a championship belt on Ron Simmons, since having a black man win the belt was an old promoter taboo. There's a brief moment where they talk about the Nasty Boys, but it's unfortunately short. From there, we find out that  Dustin hooks up with Terri, but according to Dusty's wife, there were other issues from the past that resulted in the estrangement. During this time, Dustin joined the WWF and became Goldust. Five years later, Dustin's friend and tag partner, Barry Windham, talks Dustin into coming onto WCW's Saturday Night in Jacksonville where he reconciles with Dusty. There's a brief mention of a "kiss my ass" match with Flair, before they end the disc by talking about Dusty's recent return to the WWE, where he helps develop concepts and works with the talent.

This documentary left me feeling disjointed. On the one hand, I enjoyed seeing the old footage and learning Dusty's history in professional wrestling. Yet, it seemed to skim over his personal life and, even though I have a casual knowledge of wrestling, it was sometimes difficult to keep track of which brand Dusty was wrestling with, as well as leaving out some important partners and rivals in Dusty's career. In the end, they probably could've added another hour or so to balance out the documentary.

In addition to the documentary, there are also two discs filled with various matches, promos and vignettes from Dusty's long career. Disc One is rounded out with the following extras: 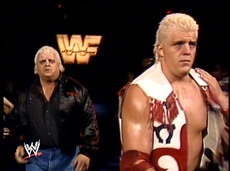 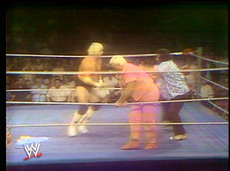 Video: the American Dream: the Dusty Rhodes Story's picture quality varied, depending on the age of the footage you were viewing. The contemporary footage was sharp and colorful (as it should be), and while the archival footage showed some limitations (it's to be expected), it's still watchable and looks pretty darn good. It's presented in the WWE's standard full frame 1.33:1 ratio.

Audio: The Dolby Digital 5.1 sound was crystal clear and enveloped my living room while I was watching it. It wasn't perfect however, since I had some issues while watching the documentary, thanks to a few moments where the background music drowned out what Dusty was saying. There are also alternate commentaries by Steve Romero, Mike Graham and Dusty on two of the matches on disc two.

Conclusion: In the end, the "Cliff Notes"-seeming documentary aside, this was a pretty entertaining set to watch. As I said in the beginning, I didn't know much about Dusty before watching this, and while I still might not be an expert on his life and career, the WWE has shown me enough to appreciate what he's done for the industry and kept me entertained for close to nine hours. Then again, that was all Dusty - he's magic on the mic and I really never got tired of listening to him. It was great watching all of his matches and seeing what real wrestling used to look like. I should also point out that while I was doing research for this set, I read a few places that some of the matches were cut (for time, for content, i'm not sure), so if someone reading this knows for a fact that this is true (and can provide proof), please email me and i'll add it to the review.

Regardless, if you're a wrestling fan, particularly of the "old school" variety, you'll want to check this disc out. While the packaging leaves a little to be desired (imagine if the "Homer's head" packaging from "the Simpsons" season 6 had sex with the packaging from "WrestleMania 20" and add the little talking button on "the Greatest American Hero"'s third season box), there's no way the content and the presentation doesn't add up to a Highly Recommended rating for wrestling fans.