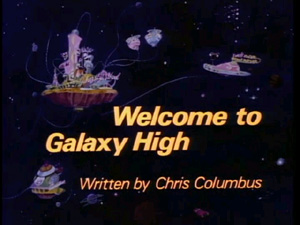 Back in 1986, Galaxy High School was the big push on the Saturday morning cartoon schedule. It had been developed by Christopher Columbus, who was part of Steven Spielberg's team, having at that point written Gremlins, Goonies, and Young Sherlock Holmes. He was a year away from his directorial debut, Adventures in Babysitting, but his writing credits were already earning him enough buzz to encourage the network to give his series a prominent position on its line-up.

I was fourteen, and I was psyched. Galaxy High School had an awesome concept: two Earth teenagers are chosen to be the only humans at a high school in deepest space. They fit two obvious paradigms. Aimee Brightower (voice by Susan Blu) is the smart and unpopular girl, while Doyle Cleverlobe (Hal Rayle) is the athletic star and big man on campus. Once they are at Galaxy High, however, they find their roles are reversed. Only in another universe do grades actually matter over sports. How alien! Doyle finds it particularly hard to fit in because the male population outnumbers the female by three to one, making him terribly common, and most spacelings have nothing good to say about humanity. If not for the help of class president Milo De Venus (David L. Lander), an eight-armed bookworm, Doyle would have no allies, particularly once the school bully, Beef Bonk (John Stephenson) and his gang set their sights on the new guy. As Beef's T-shirt consistently reminds us, "Earth Stinks!" (There is a good gag in one episode where Beef is scolded by a teacher for his favorite expletive, and he modifies it to the much less harmful "smells.")

The pilot episode of Galaxy High School holds up very well. I must have seen it a million times as a kid, because I remembered just about every scene (in fact, all the episodes were familiar). The animation is smooth and stylish, and the script plays on the central concept. Aimee is quickly adopted by the other girls, her good grades making her the exotic star, and Doyle must battle for acceptance. It works really well and should have set the tenor for the rest of the series; however, from there it's a show of diminishing returns. 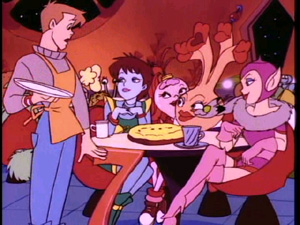 By episode 2, Galaxy High School has quickly settled into routine. Sitcom plots and simplistic morals become the order of the day. Milo feels neglected and ends up turning to the wrong person for help, requiring his friends to prove their loyalty and bail him out; Booey Bubblehead (Jennifer Darling) desperately needs tickets to see intergalactic rock star Mick Maggers, and while the gang scrambles to help her out, she of course meets the singer while he's in disguise; Doyle's new friend is an obnoxious prankster who no one can tolerate, until he proves himself to be a good guy in the end; etc. These would be slightly more tolerable if the animation maintained a consistent quality, but the look of the show is so up and down, it often fails even as spectacle. The core characters are creatively designed (Rotten Roland and his never-ending supply of eggs is a particular favorite), but the secondary characters are increasingly bland. A giant cat? A villainous alligator named Gatori? No thanks.

Still, the series does manage to stay entertaining enough to create a nostalgic diversion. It's nice to remember what it was like to get up early on Saturdays and plop down in front of the TV. Plus, some gags still work, particularly ones that probably went over my head when I was a kid. Like, I'd have never seen the double entendre in the name of Gatori's specialty glove shop, the Leather Scene. Similarly, Columbus' film geek side shows through in christening his haunted planet the Tingler in honor of shockmeister William Castle. Simpsons fans may also be amused to hear Nancy Cartwright lending Bart Simpson's tones to Gilda Gossip's multiple lips and Flat Freddy's one-dimensional body.

The last episode on the disc provides us with a glimpse of what could have been. In "Dollars and Sense," Reggie Unicycle (Gino Conforti), a one-wheeled rich boy, returns to Galaxy High and instantly falls for Aimee. His flirtations--including a box of dancing candy reminiscent of vintage concession stand ads from movie theatres--distract her from her studies. Once again, it's not the newest plot in the world, but the animation is mainly back up to snuff, and it's the first episode where the writers remembered Aimee is one of the two main characters and not just background material. Plus, it has breakdancing!

While it's expected that there will be dips in quality in any episodic television series, Galaxy High School tips dangerously towards the low end being heavier than the high end. It manages to stay close enough to the center, though, to make this DVD worth a look. That said, it does make me worry some about diving into volume 2. 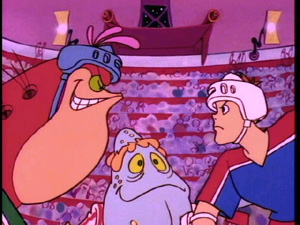 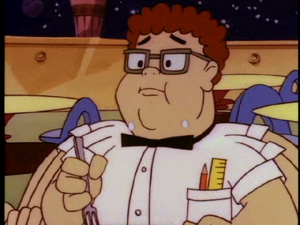 Good & Bad (Hint: Those are intended to be tears on Milo's face.)

Video:
For a Saturday morning cartoon from the '80s, the quality of the picture has held up pretty well. The colors are nice overall, and if anything, sometimes the transfer quality may be too good, as digital technology exposes more flaws in the animation. At times, the lines go a bit soft or the color flickers, but that just may be a downside of the old school animation process, not of poor work on the DVD. Other times, there are glitches that are obviously due to the transfer. Interestingly, the worse the quality of the animation on an episode, the less care seems to have been taken to clean it up. For instance, on episode 4 ("Where's Milo?"), the show almost appears to be taken from an old VHS tape, as there are a couple of pops and jumps that classic home-tapers know too well. There are also moments where the picture becomes pixilated, usually when a character comes into the extreme foreground or a sweep edit is used for a scene transition. These kinds of glitches appear more and more the farther into the DVD you get.

Sound:
Originally recorded for television two decades ago, the sound was never meant to be anything spectacular. Media Blasters have mixed the shows in 2.0, and there aren't any great effects. The music (provided by Don Felder of the Eagles) stands out as particularly well done, but episode to episode, the sound is inconsistent. As I went from one show to the other, I had to reach for my remote and adjust the volume accordingly. Sometimes the sound went up, sometimes down.

Extras:
Nada, unless you count "play all." Also, I will make a note about the odd cover art. Outside of a couple of the characters (Beef, Flat Freddy), one would almost think that whoever drew this went off of descriptions based on someone's distant memory. While some of the characters depicted kind of look like the ones in the show, they aren't actually colored properly. For instance, is that Doyle with the blonde bangs? Wendy with the mocha tan? Milo has suddenly turned into a fat kid eating a hamburger rather than one with eight arms. It seems weird to advertise a show that's biggest draw is its design by showcasing a completely different look.

Final Thoughts
If you want a decent stroll down memory lane, then get yourself some sugary cereal, Rent It, and then sit yourself down some Saturday morning and take yourself back to the good old days. Galaxy High School will likely only serve as that sort of diversion, rather than the sort of entertaining animated comedy that will make frequent visits to the tray of your DVD player. 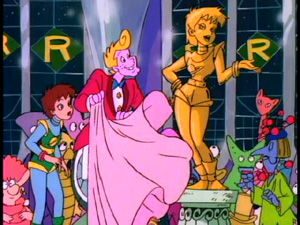