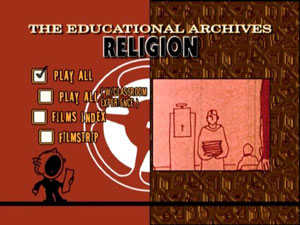 
The Movies
Most everyone has had to sit through an educational film at one time or another. The older you are, the more you've sat through, and the more ridiculous they were when you were younger, though distance and perspective are a large part of that. All educational films have a few things in common: a defined point of view, a relatively clear message, low production values, a heavy-handed way of delivering the previously mentioned message and a general inability to grow old with grace. They also tend to fail at their intended goal, instead becoming background noise for a nap or inspiring giggles. Some become legendary, some fall by the wayside, but many are collected on DVD, as nostalgia-hunters try to recapture their childhood.

Right off the bat, the problem with this set is that it follows previous successful collections by Fantoma, which included the best of the best in educational films. It's hard to top marvels like "The ABCs of Sex Education for Trainables," so we get the next level of greatness from this genre. Of course, just because we've seen the best educational films doesn't mean this set is without merit, however it pales in comparison with the earlier releases.

This collection hits on the two big themes, sex and drugs and social engineering, and adds in two hot topics in religion and politics. The resulting group of films is wildly diverse, though the entertainment value is predictably heavy on the sex/drugs and social DVDs and lighter on the others. Part of the problem is that these films aren't the kind of cock-sure boasts that make for really entertaining and misguided educational movies. Instead, they are just products of their times, and barely shocking in most cases. These are far from the brutal propaganda films of the World War II era.

Here's a look at what you get:

MORE SEX AND DRUGS
As you might expect, this disc has the most memorable content, due to the subject matter. The drugs films are surprisingly interesting, actually, and not just for their comedic value. "Drugs are Like That" is a modestly artistic attempt to talk about drugs, while "Keep off the Grass" and "Focus on LSD" actually attempt to look at the drug in question from both sides of the drug debate. Sure, the anti-drug side gets much more play, but to see educational films take a stance other than a firm "NO" is unique to a child of the "Just Say No" generation. On the topic of sex, the films are very interesting, including the depressing coming-of-female-age story, "Sally," and the pro-masturbation movie "Parent to Child About Sex," which features some horrifying parental reactions to the knuckle shuffle. The one that will stick with you for the longest time though is "Sudden Birth," a movie made to prepare cops for the possibility they may need to deliver a baby. The film features a real-life birth, shown in graphic detail, which will shock many, and adds a layer of bizarre humor to the piece. 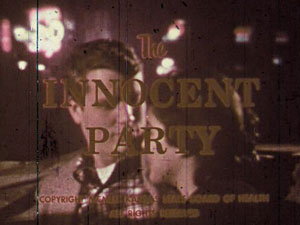 SOCIAL ENGINEERING 201
This category is rather broad, but its true strength is the fact that the messages conveyed are hardly controversial and should really be common sense. That these concepts needed to actually be explained, as seen in the trademark preaching narration of "Good Health Practices," makes them bizarrely intriguing. The cartoon "The Cautious Twins" might be the most disturbing, as a pair of adorable siblings are chased around town by pedophiles, while "Skipper Learns a Lesson" takes the unique path of "subtlely" illustrating racism by telling the story of a dog, instead of a person. The textbook feel of these films can get a bit annoying after a few films, and the lack of any real drama can slow them down as well.

PATRIOTISM
These films are certainly out-dated, as scare-tactic atomic-age films like "Duck & Cover" and trippy psychedelia such as "200" have little relevance today. But then a film like "Despotism" crops up, which lays out a way to evaluate whether a country is ruled with democracy or despotism. Use the scales provided to evaluate the current state of the U.S.A. and a scary vision of where we are now emerges, one that the film seems to foresee. Other highlights include the legendary and severely stupid "Duck & Cover," the star-studded, but lengthy anti-Communist "You Can Change the World," and the disturbing "Mission: Sonic Boom," which explains how security outweighs the lifestyles of the citizens. Once again, as the discs' comments note, it seems like history is repeating itself.

RELIGION
Expect a heavy-handed hellfire and brimstone church bent, and you may be disappointed here. Instead of anti-evolution/pro-life rants and Jack Chick-style stories, we get the concept of Christianity applied to scientific topics like plants and atomic bombs, in an attempt to quietly sneak religion into the discussion. Among the more amusing pieces included are an informercial for other religious movies, along with a fantastically overblown look at rock music and religion, "Youth Suicide Fantasy." Hosted by a pair of brothers, the show attacks the use of sex, violence and satanism in promoting rock music by displaying a host of album covers. Some of the more experimental films in this set are on this disc, with "Door to Heaven" and "Stalked" representing a different approach to educational films.

After watching these discs, it feels like the set might be a bit of overkill for most viewers, and that many people would be very happy just owning the "More Sex and Drugs" DVD, which is available separately, and renting the rest. While there are parts of the other discs that are enjoyable, the "More Sex and Drugs" collection is the most consistently entertaining. 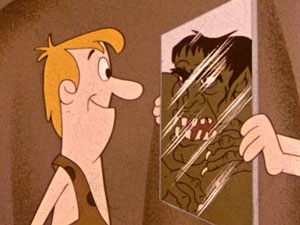 The DVDs
Packaged to look like a school locker, the set of four DVDs collects four previous releases from Fantoma's educational film collection. Each disc features an animated main menu, with options to play all the films, select individual movies and check out the special features. Using the film selection menus allow you to read notes about the movies that give them some much-needed context. There are no audio options (other than the special features) and no subtitles or closed captioning.

The Quality
The quality of the transfers on these films is all over the map, ranging from the mildly scratched to the nearly obliterated, as one would expect from low-budget classroom films made as far back as the '40s. Though the majority feature a good deal of vertical scratches and dirt in the transfer, some look like they've been dragged over gravel before being fed through a shredder. That said, they look pretty good for their age, with some decent color and a relatively high level of detail overall. Considering the subject and the wide range of materials, you've got to expect a bit of good and a bit of bad.

The sound is as thin as one would expect from a classroom filmstrip, and presented authentically via Dolby Digital 2.0 soundtracks with mono mixes. This is a right-down-the-middle affair, and it sounds as good as it possibly could, complete with pops, crackles and drop-outs throughout the clear dialogue.

The Extras
The Religion and Patriotism discs have a simple, but ingenious bonus feature, that really enhances the presentation. You can watch the DVDs with "The Classroom Experience," which presents the film with a 5-channel audio presentation. The rear speakers are fed a track that has the sound of an old filmstrip projector, while the side speakers get echos of the main audio track. The effect will really pay off for those who remember what is was like to sit in a classroom with one of those creaky old machines cranking away.

Three of the discs have a manual filmstrip to flip through. Patriotism has "The Vocabulary of Freedom" and More Sex and Drugs has "Our Family to the Rescue," while Social Engineering features "Keeping Busy." Religion also features an automated slide show, "God Needs You to care for Others," which is presented in the original film-strip format, complete with the change-frame chime that sounds with each screen flip. This is a serious nostalgic treat for anyone who wanted to turn that knob on the projector. 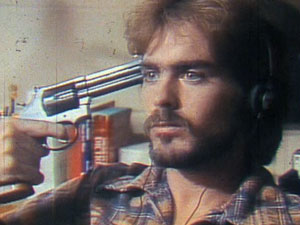 The Bottom Line
I'm a big fan of old educational films, mainly for the purpose of laughing at outdated modes of thought and pathetic production. Unfortunately, this set doesn't provide very much in terms of laughter, though there are some moments of outright insanity to enjoy. This collection offers two main reasons to watch: a) for archival/historical interest, and b) to goof on with friends. There are some very boring stretches though that will encourage viewers to fast-forward. The set is pretty solid in terms of the presentation and packaging, though the extras are certainly slim (and appreciated where included.) This is more of a get-together DVD than one you'll watch by yourself, but if you have friends with an odd sense of humor and you like to watch bad movies together, you could do much worse than this. A rental should be enough for most anyone, while fans of the genre might want to own the sex and drugs disc.