A small battalion of Russian communists is abandoned deep into the deadly sands of the Caspian desert. Their valuable cargo, White Army officer Vadim Govorukha-Otrok, must be transported back to the Red Army commanding post on the opposite side of the desert. Day after day the men begin to lose hope and the weaker ones are soon consumed by the sands. With desperation in the air the beautiful idealist Maria is asked to guard the bourgeois officer Govorukha-Otrok…

Completed three years before his classic Баллада о солдате a.k.a Ballad of a Soldier (1959) Grigori Chukhrai's second feature film Сорок первый a.k.a The Forty First (1956) is nowadays considered by many Russian cinema scholars as one of the strongest Soviet films from the early 1950-60s. Surprisingly avoiding the typical for Soviet cinema at the time heavy political propaganda The Forty First manages to focus on the romance between two people on the opposite sides of the political spectrum. 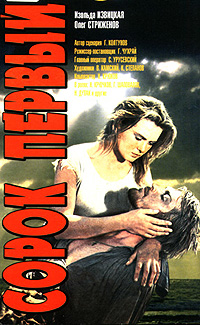 Based on the novel by Boris Lavrenyonv The Forty First has all of the necessary ingredients for a classic melodrama where love must survive the cruelties of time-political hatred, class division, war. Amidst all of the adversities Maria (Izolda Izvitskaya) and Vadim(Oleg Strizhenov) must endure however there is also a rather unexpected sense of tranquility oozing from Grigori Chukrai's camera. The breathtaking vistas from the Caspian desert (marvelously captured by legendary Soviet cinematographer Sergei Urusevski who only a year later will shoot the classic Летят журавли a.k.a The Cranes Are Flying) immediately become a crucial part of the romance between the two soldiers-when they make love the world stops to exist, when they fight black, in all of its varieties, becomes overpowering.

The Forty First is most certainly not your typical Soviet war picture. The carefully observed romance between Maria and Vadim makes it almost impossible to believe that this film was produced at the peak of Soviet Communism. Yes, there are occasional references to the ongoing conflict between the Reds and the Whites yet it feels as if history is being used only to exacerbate the doomed affair between the two lovers.

The dialog in The Forty First has also been scripted in a manner that does not truly reveal the influence Soviet apparatchiks had on film directors at the time. In fact, more than once Vadim utters some openly disturbing lines that must have miraculously slipped through Soviet censors. If I had to guess I suppose it was the extended debate between Maria and Vadim in the closing scenes of The Forty First where she emerges as a "winner" that must have spared Grigori Chukhrai's film from the long hands of Soviet censors. Whatever the reason(s) it truly is a small miracle that The Forty First remained untouched.

Outside of its native USSR The Forty First quickly gained the respect of film critics and international audiences. As a result a year after it premiered in Moscow Grigori Chukhrai's film was invited to participate in the main program at the Cannes Film Festival where it consequently won the Special Jury Award. Back in the Soviet Union the success The Forty First achieved in Western Europe was seen as an excellent opportunity to promote the Soviet regime and as a result Grigori Chukhrai was granted unlimited creative freedom. Three years later the Soviet director returned with his famous war epic Ballad of a Soldier which was consequently nominated with an Oscar for Best Writing, Story, and Screenplay (1962).

The menu system for this DVD could be set up in either English or French (the extras section could be set entirely in Russian).

Presented in its original aspect ratio of 1.33:1 The Forty-First appears to have undergone some serious restoration work. This is only the second time I have seen this film and to be honest it all looks quite different to me. Much of the colors are quite different from what I remember: now they look sharp and lush. There is something in this transfer however that puzzles me a great deal-after I received the disc from Xploited Cinema I immediately viewed the film and was surprised to see such a darkened version of it. I did some research and it appears that most of what the Russian crew had to work with were simply small fragments from the original film negative. As a result after all of these different elements were digitally cleaned up I suspect that they were also intentionally darkened as to bring up a better degree of detail and minimize the image discrepancies (I suppose what we have here is something similar to the technique Criterion use for some of their releases where they tend to favor a darker image). This being said however I am not that sure I approve of what the Russian team has done-unless there is a serious reason(s), which I am not aware of, to provide the film with such a dark look I must admit that perhaps what we see here has been overdone quite a bit. To sum it all up there are more than a few scenes where it almost feels as if Ruscico's producers have applied a heavy filter which instead of balancing the video quality practically makes it quite uneven (a few scenes are at the point of being unwatchable, that's how dark they are).

Aside from the above mentioned issue I also must report that The Forty First must have been sourced from a PAL-print, perhaps a master that was meant for the Russian market, and the NTSC version I have in my hands does offer some minor "ghosting". Still, the print is of more than decent quality and I think that those with regular tubes will be able to enjoy the film regardless of the few flaws I mentioned above. NTSC-encoded, Region-ALL.

There are four different options on this DVD: the original Russian mono track, a more elaborate 5.1 Russian mix, as well as English and French 5.1 tracks. I clearly prefer the mono track as it provides the film with a certain charm that the newly remastered tracks in my opinion lack. Yes, there is slightly more movement with the Russian 5.1 track but the mono track is just as good. The English and French tracks are nothing more than voice-over/narrated versions of the original Russian track. I listened to both of them just to get a feel what they were like and must admit that while they are not terrible I can hardly believe that anyone would want to pick them over the Russian mono track. It is simply apples and oranges! In addition the DVD comes with optional English, French, German, Spanish, and Italian subtitles. While I can not comment on the German, Spanish, or Italian subs the quality of the English and French translations is fantastic.

Before I comment on the extras allow me to point out that all of the supplemental materials in this DVD offer the subtitle options I mentioned above: English, French, Italian, Spanish, and German.

First there is an interview with Oleg Srtizhenov who plays the enigmatic Vadim. The aged actor discusses in great detail the history of the project, how the film was shot as well as some of the difficulties the Soviet crew had to endure. Next, there is an interview with Grigori Chukhrai which must have been conducted a couple of years ago as the legendary Russian director passed away in 2001. Here you will hear a number of interesting stories which Chukhrai recalls and plenty of information pertaining to the materialization of The Forty First. Next, there is a small section of filmographies for the main cast. Last but not least there is large photo album (divided into two sections) with an abundance of photographs (actors, director, film shots).

It was not Ballad of Soldier that first introduced me to the sensual cinema of Grigori Chukhrai. It was his The Forty First which I saw many years ago (dubbed). In fact, I only saw Ballad of a Soldier much, much later on I think during the late 80s. To this day I think that The Forty First is Chukhrai's best work and I am glad to finally own it in my library. The DVD herein reviewed does seem to have a few issues but I guess it is a small miracle that the film was actually restored by MosFilm. Considering the total anarchy that reined in the post-perestroika Russian state it is actually a revelation to be able to see The Forty First after so many years. From a very biased reviewer: Recommended.