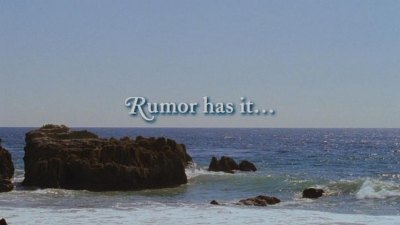 The Movie:
There's a seed of a clever idea in Rob Reiner's 2005 romantic comedy Rumor Has It... that the director and his cast fail to sufficiently exploit. Jennifer Aniston stars as a 30-something woman who discovers that her family was the basis for Charles Webb's 1963 novel The Graduate and the subsequent 1967 film version by Mike Nichols (the new movie has been set in 1997 to accommodate the ages of the actors relative to the referenced material). That would make Grandma (Shirley MacLaine) the Mrs. Robinson character and Beau Burroughs (Kevin Costner) the Benjamin Braddock. Struggling to piece together her true family history, Aniston's Sarah tracks down Burroughs to get some answers, but finds herself making the same mistakes that the last two generations of women in her family did.

You can imagine that a smart director with a sharp script could have a lot of fun riffing on The Graduate and updating its themes and humor for a new generation. Unfortunately, such an idea seems completely beyond the ambition of Reiner and crew, who have instead assembled a rather standard chick-flick that doesn't seem to know anything at all about The Graduate in the first place. Costner's Burroughs character is depicted as a charming ladies' man

seducing women with just a glance, which is about as far from the awkward Benjamin Braddock type as you can get. The movie opens (or nearly does) with Aniston flying home to see her family after an extended absence, but did it occur to anyone to duplicate the famous airport moving-sidewalk credits sequence from the Nichols' film? I guess not. There's a wedding reception party scene plays vaguely like the graduation party in the old film, but the similarities are so thin you'd almost have to force the comparison. Reiner has brought in offbeat songstress Nellie McKay to provide songs for the soundtrack, but doesn't even attempt to use her in the same capacity that Nichols used Simon and Garfunkel, instead asking her to just write some syrupy romantic tunes that could have been the work of a dozen other singers cashing a paycheck.

Once upon a time, Rob Reiner directed the definitive romantic comedy, the very smart and very funny When Harry Met Sally. Sadly, those days are long past. Rumor Has It... is a by-the-numbers formula rom-com without much to distinguish it. It has two or three very funny moments, lost in a movie that aims for sappy and predictable when it had the potential to be witty and hilarious.

The Blu-ray:
Rumor Has It... debuts on the Blu-ray format courtesy of Warner Home Video. The studio previously released the picture on HD DVD back in May of this year, and after reviewing that disc I was pretty much expecting that I'd never have to think about the movie again. Unfortunately for me, this new edition makes it one of the first titles available for direct comparison on both of the HD disc formats, which means that now I have to watch it a second time, even going so far as scrutinizing selected scenes on both discs repeatedly. While Jennifer Aniston is a beautiful woman and I don't mind looking at her in High Definition, after this I swear I'm done with the damn movie forever.

Please note that the star rating scales for video and audio are relative to other High Definition disc content, not to traditional DVD.

Video:
The Rumor Has It... Blu-ray is encoded in High Definition 1080p format using MPEG2 compression on a single-layer 25 gb disc. The movie's theatrical 1.85:1 aspect ratio has been slightly opened up to fill a 16:9 frame with negligible impact to the composition.

I wrote the following about the HD DVD release, and since Warner has reused the same master the comments also hold true for Blu-ray: The picture is sharp, colorful, and clean. Sadly, the movie has a very bland photographic style reminiscent of TV sit-coms, which prevents it from qualifying as demonstration material.

Considering that Warner has consistently produced higher-quality DVDs than Sony, it shouldn't be too surprising to discover that their Blu-rays are also better produced. Despite using the antiquated MPEG2 compression codec on a single-layer disc, the Rumor Has It... Blu-ray is virtually devoid of any visible compression artifacts, something that I can't say about any of the Sony Blu-rays I've watched so far. The lack of space-hogging PCM audio (which Sony favors) probably contributes to this, but my honest feeling is that Warner simply puts more care and effort into their disc mastering than Sony does.

Naturally, a comparison with the HD DVD edition of the movie is in order. Since both discs utilize the same color transfer from the same studio, the differences between them fall into the categories of compression codec and available disc space. The HD DVD uses VC-1 compression, and because it was one of those dual-format combo discs with HD on one side and regular DVD on the other, the High-Def version was constrained to a single 15 gb HD DVD layer. The Blu-ray is compressed with MPEG2, which is less efficient and requires more space, but is spread to a slightly larger 25 gb Blu-ray layer. In practice, the differences between the two discs are subtle, with the edge in this case going to HD DVD.

Watching several scenes repeatedly on each disc, the HD DVD appears slightly sharper and more detailed, especially in facial features (visible skin pores, subtle complexion tones) and the fabric patterns of clothes. This also lends the HD DVD a touch more depth and vibrancy. The Blu-ray is softer in these details and looks flatter as a result, but truth be told the problem is only noticeable in direct comparison. I'm inclined to conclude that VC-1 is a better codec than MPEG2, but I'll note that at the time of this writing only one Blu-ray player is available (the Samsung BD-P1000), and recently rumors have been circulating that Samsung employs excessive noise reduction filtering that may soften the picture. Until another model of Blu-ray player is released, I can't know for certain whether that's really true or not. In any case, either disc is perfectly satisfying, and Warner has proven that there may still be hope for Blu-ray after all.

The Rumor Has It... Blu-ray is not flagged with an Image Constraint Token and will play in full High Definition quality over a Blu-ray player's analog Component Video outputs.

Audio:
The movie's soundtrack is encoded in standard Dolby Digital 5.1 format. This is a very basic comedy mix that's almost entirely dialogue and music, with no surround activity or notable bass. It's fine for what it is, but that's really nothing to get excited about. The Nellie McKay songs on the soundtrack do sound great, however.

The HD DVD has a Dolby Digital Plus track, which offers higher bit rates for potentially better quality, but frankly this is just a bland soundtrack that couldn't possibly take advantage of that. I switched back and forth between the two discs, and couldn't tell them audibly apart. I expect that a more audio-intensive movie would make for a more interesting comparison.

Extras:
The only bonus feature on this Blu-ray title (a theatrical trailer) is recycled from the DVD and HD DVD editions and is presented in Standard Definition video with MPEG2 compression. That's it.

Final Thoughts:
Rumor Has It... is just another boring chick-flick that squanders its appealing cast and clever concept in some bland material and execution. The movie is now available on both HD DVD and Blu-ray, and looks perfectly good on either. The HD DVD is slightly better, but the Blu-ray is a bit less expensive (it's not a combo disc like Warner has foisted on the HD DVD). Since the movie isn't very good, I can't recommend it for more than a rental anyway, so feel free to rent it on your format of choice.