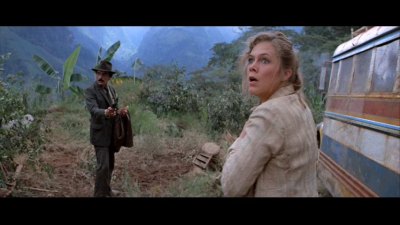 Of all the movies that were inspired by the box office success and pop culture adoration of Steven Spielberg's Raiders of the Lost Ark, it's got to be Robert Zemeckis' Romancing the Stone that still stands out as one of the very best. It's a flick that takes those three integral ingredients found in any worthwhile matinee-style movie (comedy, action, romance) and displays them with a crispness and color that most filmmakers would kill to emulate.

The plot is Saturday afternoon simplicity itself: Successful yet frumpy novelist Joan Wilder has a sister in serious trouble, and if she doesn't bring a recently-acquired treasure map to a far-off hotel in Colombia, Joan's poor sis could wind up as gator food. So what's a mild-mannered New York girl do when she first arrives in the harsh and uninviting climes of South America? Well, she gets on the wrong bus, accidentally causes a bus accident, butts heads with a villainous cop, gets casually rescued by a square-jawed jungle hero, and hires the guy to escort her to safety. And this is just the first 31 minutes.

As Romancing the Stone rolls smoothly forward, we're treated to a surprisingly witty script, some really excellent chemistry between the two leads, and a large (and very welcome) portion of comic relief, courtesy of an enthusiastically slimy Danny DeVito. All you need to know is that buried treasure is somehow involved, and that every character onscreen will beg, borrow, or steal to get their hands on the goods. Daring escapes, crazy chases, exciting brawls, and well-timed set-pieces pop up throughout Romancing the Stone, and the reason the flick is better than just "simple escapism" is because Michael Douglas, Kathleen Turner, and Danny DeVito bring so much warmth, color, and cock-eyed charm to the project. 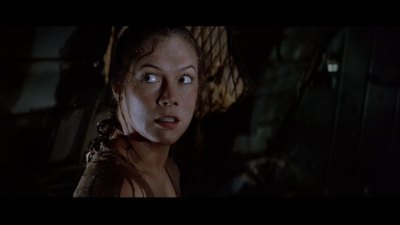 Director Robert Zemeckis owes a lot of his career to Romancing the Stone, and I think the guy pretty much earned his entry in a big way. Four years removed from the hilarious (yet underappreciated) Used Cars, Zemeckis was hired by Douglas to bring an old-school adventure vibe to the story, only it had to be infused with lots of good humor and, if possible, just a touch of realistic romance. Obviously it was a great call on the part of Michael Douglas, because Romancing the Stone went on to be a big hit with critics and audiences alike -- and Mr. Zemeckis would parlay this success into a little something called Back to the Future ... which was followed by Who Framed Roger Rabbit.

Obviously inspired by the rousing success of Raiders, Zemeckis and company were sure to inject a "serial adventure" vibe into Romancing the Stone, but watching it again, more than 20 years after its release, the movie more than stands on its own. For one thing, it's told from the point of view of a woman, one who (at first) seems like a shrieking little wimp, but slowly grows to become a lot more confident and self-sufficient than one might expect. Other aspects that separate Stone from Raiders are its attention to lovey-dovey romance, its modern-day setting, and a much broader sense of humor.

Just to clarify: I am in no way implying that Romancing the Stone is superior to Raiders of the Lost Ark, but offering a defense of a flick that's often been politely dismissed as "a Raiders ripoff, but a good one at least." So while it's true that Raiders made old-style adventure epics "fashionable" again, and that Stone used that opening quite well, I don't think the flicks really have all that much in common. Plus, people don't generally compare rotten movies to Raiders of the Lost Ark, so I doubt that Zemeckis and company really mind the comparison all that much. 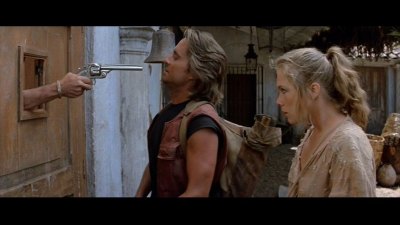 Video: Newly upgraded with an anamorphic widescreen (2.35:1) transfer, the movie looks pretty darn good (especially compared to the previous DVD release), with bold colors and eye-popping jungle scenery. The interior scenes (mainly in Act I) look a bit softer than the rest of the flick, but they don't last very long.

Audio: Dolby Digital 2.0 Surround in either English or French, with a DD 1.0 track for the Spanish-listeners. Subtitles are available in English and Spanish. Audio quality is adequately clean and clear, although nothing extra-special. 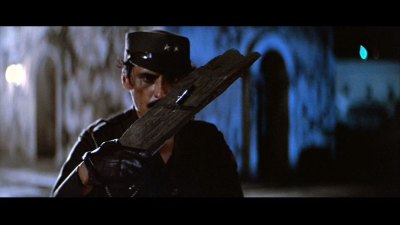 Of special interest to fans will be the eight deleted scenes, which can be viewed individually or in a 19-minute block. Most of the excised material deals with Jack and Joan's early jungle adventures, but there's some other interesting stuff in here as well. Deleted scenes are labeled as "Jack T. Colton," By the River, Keep Quiet, Treasure Map, Campfire on a Cargo Plane, "Romancing the Stone," Alligator, and The Book Signing.

Next up are four featurettes:

Rekindling the Romance: A Look Back (19:45) is a cool piece in which Douglas, Turner, DeVito and a few others (nope, no Zemeckis) look back over the creation, production and impact of Romancing the Stone.

A Hidden Treasure: The Screenwriter (3:13) is a tribute to first-time screenwriting sensation Diane Thomas, who died in 1985 when her drunk boyfriend caused a horrific car accident.

Douglas, Turner and DeVito: Favorite Scenes (3:52) is just what it sounds like: The three stars sharing their favorite moments from the movie.

Michael Douglas Remembers (2:16) is just a bit more from the movie star/producer.

Bonus: Inside the DVD case you'll find an 8-page booklet with production notes and chapter titles.

And that's it! No commentaries or trailers, unfortunately, but hey; four featurettes, eight deleted scenes, and a sparkly new transfer on a very entertaining adventure/comedy/romance hybrid. Could have been better, I suppose, but the package still comes Highly Recommended.