Yes, you read that right: Frank Sudol's City of Rott is all of the above. All the thing's missing is a musical number and a wedding scene.

Produced on an ultra-low budget using only a home computer and some obvious talent (both artistic as well as musical), Sudol has slapped together a cartoon zombie-com that should prove to be an absolute delight to all the hungry gorehounds out there. 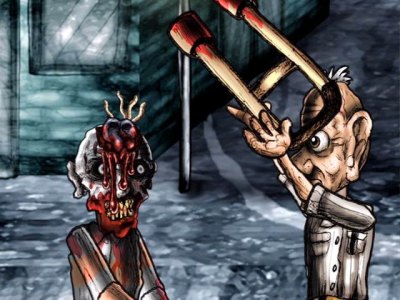 Well ... actually, that's not entirely accurate. The first 2/3rds of City of Rott is a silly, colorful, cleverly animated, and amazingly gory little tale. But somewhere right around where most movies start focusing on Act III, City of Rott takes a curious turn and really ends up losing a lot of steam in the process. Matter of fact, the 77-minute movie feels a lot more like a series of interconnected shorts than an actual three-act story, but let's focus on the fun stuff, shall we?

The world has been overtaken by brain parasites that turn their human hosts into armies of ravenous zombies. Stuck in the middle of this ultra-goopy mayhem is prickly Fred Figiero, an ornery old coot who's willing to brave the teeming undead if it means he can get his mitts on a new pair of slippers. Yes, slippers. Fred's only ally in his battle against global zombiedom is his walker, which Fred believes can talk, when in fact Fred is slowly going insane because of a different kind of brain parasite that doesn't turn you into a zombie, but it does make you hallucinate quite a lot. 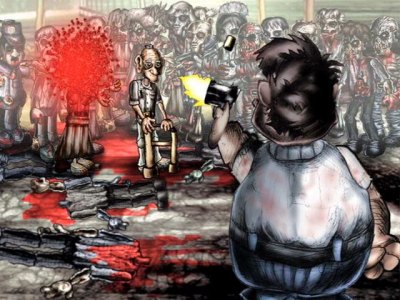 And that's it, plot-wise. Fred wanders from mall to bridge to alleyway, forever plugging all sorts of holes in the ceaseless array of rotting zombieheads. He meets a few allies along the way, but none of the goofballs seem to last very long against the hordes of hungry corpses. And for a cartoon, City of Rott is pretty much packed with crazy carnage and explosive geysers of gore. Combine that with Sudol's unique brand of "South Park meets George Romero" animation and the filmmaker's talents for high-energy action music, and you're looking at a mini-movie that the hardcore horror freaks should really dig ... or at least the first 2/3rds of it, anyway.

Basically, City of Rott feels a lot like one of those very few video games that are actually fun to watch, even when it's not your turn to play.

Video: The fullscreen transfer is actually quite good-looking, provided you consider dismembered zombies and exposed brains worthy of your attention. Sudol's animation style takes a little getting used to, but I think it works quite well (especially in those far-off establishing shots and the frequent sequences of million-zombie mayhem). 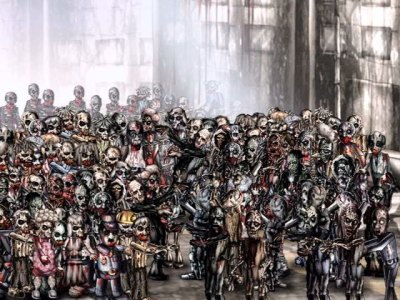 Audio: The Dolby Digital 2.0 track is perfectly fine, what with Fred's frequent mumblings perfectly balanced against the rather rock-heavy action explosions.

One-man movie-maker Frank Sudol provides a feature-length audio commentary, although he's joined by his "leading man" Fred Figiero. When Sudol's not talking in his goofy old man voice (which, to be fair, does provide a few chuckles), he divulges some solid information on his movie's inspirations and creation. Not too often you hear a filmmaker city Larry Cohen's The Stuff and Jorge Grau's Let Sleeping Corpses Lie in the same breath, so obviously this track is (also) for the horror geeks.

Fun concept, clever execution, unique animation, and tons of gooey gore. Those assets serve to make up for the flick's final-act meanderings, and the whole DVD makes for a package that's definitely Recommended to the horror fans. City of Rott might feel like a collection of 10 or 12 internet shorts, but even if that were the case -- two out of three would still be worth watching.