Sogo Ishii is considered by many to be one of the godfathers of modern Japanese cinema. Filmmakers such as Shinya Tsukamoto, Takeshi Miike as well as many others have been influenced by Ishii's work. Now, one of Ishii's groundbreaking early films, Burst City, is finally available on DVD. 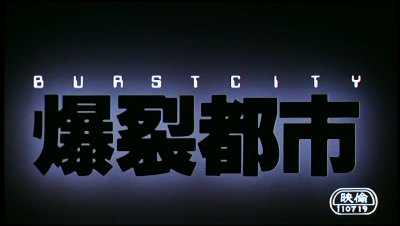 Much like the punk revolution that he covered in his films, Sogo Ishii was essentially doing the same thing with his approach to filmmaking. Shooting on anything he could get his hands on, Ishii independently made 3 shorts and a 70 minute feature before exploding onto the Japanese film scene in 1980 with Crazy Thunder Road. Studio execs from Toei were so impressed with Ishii's student film, that they bought the rights and put in theaters. After quickly finding critical acclaim and financial success, Sogo got funding for his next project and third feature, Burst City.

Writing this review, I find it hard to explain the experience of viewing Burst City for the first time. Being such an unconventional film comprised of hyperkinetic sound and visuals, words do Burst City little justice. Set in semi post-apocalyptic dilapidated future, Burst City is void of any real traditional lead roles. Instead the film focuses on battling punk bands, rival gangs and the happenings in a pseudo shanty town. The closet central characters Burst City has are two drifters, one wearing Mad Max like armor and other his crazy mute sidekick. The two open the film by arriving in "Burst City" and close the film by leaving in their sidecar equipped motorcycle. During their visit to "Burst City", punk bands physically and sonically battle each other on stage, drag racing contests run into the early morning, shady gang dealings transpire and then there's the fighting. Lots and lots of fighting. So much in fact, that the final scene supposedly used 6,000 extras to achieve the film's climax. 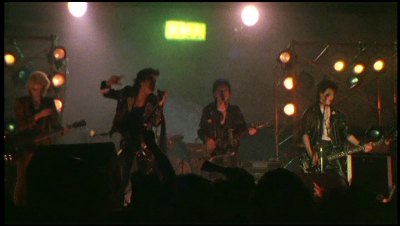 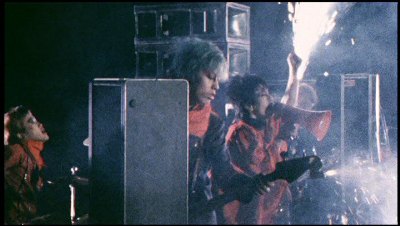 What makes Burst City so exceptional is Sogo Ishii's brilliant, unrestrained use of the camera. The energy he manages to create throughout the film can largely be accredited to his creative camerawork. Everything from the wild camera mounts, daunting tracking shots, insane camera angles and super shaky hand held shots give Burst City a unique look, especially for the time. Probably the closest comparison to Ishii's visual style I can think of is some of Sam Raimi's early work. On top of all the camera ticks Sogo applies, the rapid fire editing of Burst City makes Michael Bay's movies look like child's play.

Of course the other device which propels Burst City is the energetic Punk Rock soundtrack. Both the songs performed on and off screen truly create the "backbone" of the film, compensating for the lack of story and dialogue. Ishii assembled members of many of the prominent punk bands at the time to help contribute to the film's soundtrack. Members of the bands from "The Roosters", "The Rockers", "Inu" and "Stalin" also acted in the film. In particular the band "Stalin", the Japanese equivalent of the "Sex Pistols", played the red clad enemy of the "Battle Rockers".

The unsung hero of Burst City is it's phenomenal production design. The run down industrial wasteland which most of the film takes place in creates a very convincing atmosphere for its inhabitants to occupy. The actual "Burst City" shanty town itself is meticulously detailed and reeks of realism. In fact at times, parts of Burst City almost feel like a documentary. Ishii's gritty shooting style and "out of control" filmmaking matches up perfectly to help create this illusion. 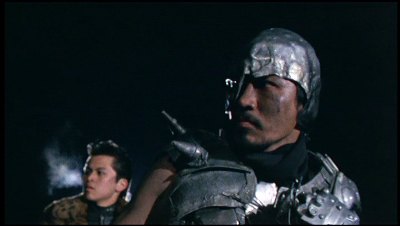 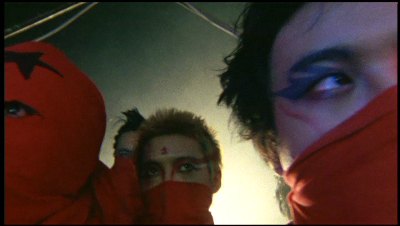 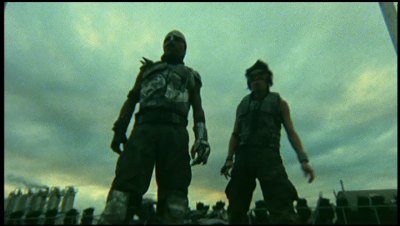 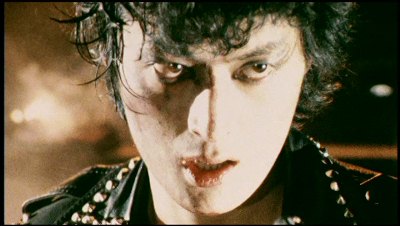 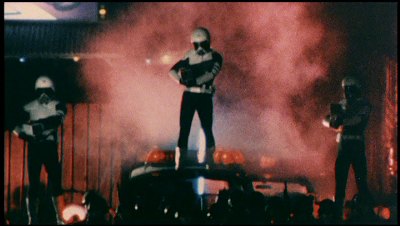 Truly a one of a kind film, Sogo Ishii's Burst City is every bit as impressive as it was when released in 1981. Fans of modern day Japanese cinema would be well advised to give this film a look, as its influences are still being felt today. Burst City is also a hidden gem for film lovers that want to see something they've never seen before. Discotek has done a wonderful job with their release of Burst City on DVD. It's a shame they were unable to gain the rights to the soundtrack, but sometimes you can't have your cake and eat it too. Highly Recommended.