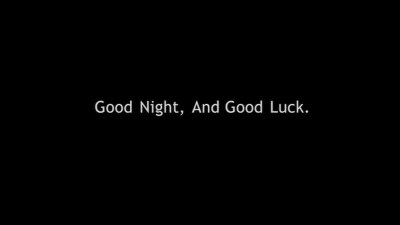 "I've searched my conscience, and I can't for the life of me find any justification for this. And I simply cannot accept that there are, on every story, two equal and logical sides to an argument."

The Movie:
Let's set aside the inevitable political squabbling for a moment. Yes, George Clooney is an outspoken Liberal with a capital "L", and yes it's unmistakable that his intention in making Good Night, And Good Luck. (his second directorial effort) is to offer viewers a cautionary allegory about our own current political situation. That will undoubtedly rub many Conservatives with a capital "C" the wrong way. So be it. Criticize his motivations if you must, but the end result of Clooney's ambition is nonetheless a compelling character drama and riveting re-enactment of the famous 1954 standoff between newscaster Edward R. Murrow and fear-mongering Senator Joseph McCarthy.

Long underappreciated character actor David Strathairn delivers a remarkable performance as Murrow, capturing the charisma and gravity that made him a national icon, and also the world-weariness that informed his decision to take on such a dangerous opponent. Clooney takes a smaller supporting role as Fred Friendly, the producer who backed the anchor as they butted heads with the network and sponsors. These were men of principle, who saw a grave injustice being perpetrated against the American people and had the courage to stand up against it. Murrow was also, as the movie does not shy away from depicting, something of a grandstander and savvy self-promoter who certainly had his own interests in mind when embarking on this risky course of action.

Supporting roles are filled by a stellar cast including Patricia Clarkson, Jeff Daniels, Robert Downey Jr., Frank Langella, and Ray Wise, all at the top of their games. Wise in particular is heartbreaking as Murrow's friend and news commentator Don Hollenbeck, whose fragile ego took a beating when he was singled out for attack by reactionary media pundits. Rather than hire an actor to portray McCarthy and be accused of playing the role too broadly, Clooney uses archival news footage and does exactly as Murrow did, allowing the paranoid Senator to hang himself with his own deceptions right on camera for all the world to see. The footage is chilling, both as a reminder that we ever allowed such an obviously dangerous man into a position of power, and as a lesson that history can very easily repeat itself (and clearly is).

But of course, this is where we get into trouble. Frankly, the comparisons between the government and media actions of the 1950s' Red Scare and today's Terror Alert hysteria are so blatantly apparent that even if Clooney hadn't made this film someone else eventually would have had to. Obviously, the actor/director is as much or more of a self-serving attention-getter than Murrow ever was, but he's also proven himself a talented filmmaker, and fortunately underplays the potentially heavy-handed browbeating in favor of nuanced character drama. The performances are uniformly terrific, the dialogue is wonderful with just the perfect infusion of subtle humor, and the burnished black & white photography is nothing short of gorgeous. The story also has the benefit of being completely true. Good Night, And Good Luck. is one of the best movies in recent years.

Video:
The Good Night, And Good Luck. Blu-ray disc is encoded in High Definition 1080p format using MPEG2 compression on a single-layer 25 gb disc. The movie's theatrical 1.85:1 aspect ratio has been slightly opened up to fill a 16:9 frame with negligible impact to the composition.

The movie's sterling black & white photography is represented amazingly well. The image is sharp and detailed, with excellent rendering of facial skin pores and the fabric textures of clothing. Close-ups are often simply amazing. The picture has terrific gray scale and contrast range. As a non-smoker I feel guilty saying this, but on celluloid there are few images as beautiful as cigarette smoke drifting through a shaft of hard light on black & white film, and this movie is loaded with scenes like that. Mild film grain is present but well digitized and compressed so that it doesn't look noisy. If I have to nit-pick, I'll point out the extremely minor presence of edge halos in one or two of the most contrasty shots. Regardless, this is a lovely disc.

I directly compared the HD DVD and Blu-ray editions and found them nearly indistinguishable. Despite their differences in storage space and compression codec, neither suffers from any visible digital artifacts. On the currently available playback equipment, the HD DVD is perhaps an infinitesimal bit sharper with blacks ever so slightly inkier, but at this point differences like that may well be attributable to the hardware rather than the discs themselves. I'm going to rate the two equally, and consider this the first truly great-looking Blu-ray disc. With that said, I have to note that this is a short movie without any color information, and may not represent a significant compression challenge for either format.

The Good Night, And Good Luck. Blu-ray disc is not flagged with an Image Constraint Token and will play in full High Definition quality over a Blu-ray player's analog Component Video outputs.

Audio:
The movie's soundtrack is provided in standard Dolby Digital 5.1. The volume is set low by default and I suggest amplification above normal levels to bring out the subtle gravelly inflections in the voices. The movie is almost all dialogue with a few jazz music interludes, and has no particularly loud scenes that might blow out your speakers or your hearing if you crank the volume. The track is also remarkably clean and will not suffer from noise or hiss when amplified (except in the vintage recordings when appropriate). The mix doesn't offer much dynamic range or surround use, but the dialogue is always crystal clear and the music is presented in excellent fidelity.

Extras:
All of the bonus features on this Blu-ray title are recycled from the DVD edition and are presented in Standard Definition video with MPEG2 compression. All of the supplements from the DVD have carried over.

Final Thoughts:
An excellent movie gets a terrific High Definition disc release. Regardless of which competing format you prefer, this release is highly recommended.