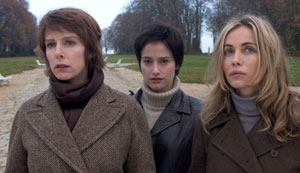 The second installment in the inspired by the late Krzysztof Kieslowski trilogy (and screenwriter Krzysztof Piesiewicz) titled simply L'Enfer (2005) follows the story of three sisters as they battle personal demons with plenty of withstanding powers.

Sophie, (Emmanuelle Beart) is suspicious of her husband Pierre (Jacques Gamblin) who is secretly having an affair with a beautiful model. The couple's life begins to deteriorate as Sophie slowly puts together the missing pieces in a puzzle where everything is surprisingly transparent.

Anne (Marie Gillain) is having an affair with a married professor from the Sorbonne who has decided to end it all. Unable to cope with the loss Anne looks for an advice in the most unusual of places-the professor's family.

In a chic Parisian bistro Celine (Karin Viard) encounters a beautiful young man who offers to read her poetry. She is moved, excited, yet unsure how to proceed. Very soon the man will reveal a terrible secret that will change her life forever.

Directed by highly-acclaimed Bosnian director Danis Tanovic whose No Man's Land (2001) won an Oscar for Best Foreign Language Film in 2002 L'Enfer is a film that left mixed impressions in me. Stylishly photographed, with an excellent script, and practically flawless performances by what appears to be the crème de la crème of contemporary French cinema the second installment in the intended by Krzysztof Kieslowski trilogy remains quite predictable.

Which is indeed quite surprising given how incredibly disjointed the actual story is-the camera follows the deeds of the three sisters as they recall past tragedies and struggle with present misfortunes. It is also surprising that even though L'Enfer does not fall too far off the moody camera work Kieslowski introduced in the Three Colors Trilogy here for the most part the cinematography feels overpolished.

I am not the biggest admirer of Danis Tanovic's work and I think it is only fair that I make it clear as you approach this review. Five years ago I found the Bosnian director's portrayal of the bloody conflict on the Balkans (No Man's Land) to be a laughable attempt in originality and to this day I continue to be amused by its success. The film fed off the favorite amongst European juries Balkan reality (for which Serbian director Emir Kusturica and his large fan base at the Cannes are to be credited) and went on to tell a story which Westerners liked quite a bit as it showed what they expected to see-a parody.

Fast-forward a few years now and I am still unimpressed by Danis Tanovic's latest work. In fact, I was very unhappy (as a fan of Kieslowski's work) to find out that he was granted the opportunity to film L'Enfer when initial production plans were announced. Looking at the final product I firmly stand by my observation that he was not the right director for this project.

L'Enfer is not a subtle film where powerful characters transform. Nor it is a film where dramatic stories are left to grow. In fact, as I feared, L'Enfer omits what Kieslowski was a master of- evocative colors, nuanced camera work, suggestive acting. Here the drama comes too quickly, the direction is rough, and the finesse which Kieswloski would have brought up is nowhere to be found. I am not impressed!!

There is something unusual about this UK DVD produced by Momentum Pictures. Even though the film does appear in its original aspect ratio of 2.35:1 it is not enhanced for widescreen TV's. Yet, it is the same print as the one used by TF1. I own the TF1 disc and a quick look suggests that Momentum have used the same elements (even though there is slight discrepancy in the colors-the TF1 disc is slightly darker and with more detail). So, I am not quite so sure who was responsible for this gaffe. Perhaps it is just my DVD which came sealed…but I doubt it. This being said the rest of the UK disc also reveals some macro-blocking with a bit of edge enhancement that might bother those of you with more sensitive equipments. Contrast on the other hand is rather manageable and the print is in immaculate condition. So, why was this UK release not 16x9 enhanced is a total mystery to me. Last but not least Momentum have decided to further botch their release by adding "imposed" English subs. Go figure! PAL-encoded, Region 2.

Quite good, indeed, yet…this disc only offers the French 2.0 track. The more elaborate 5.1 track from the TF1 release is nowhere to be found and once again I am unsure why (the music has a major role here so I consider this to be another gaffe). This being said the rest of the audio treatment is quite good as I did not detect any hissing or pop-ups.

The only extra on this disc is a "Making-Of" which is taken from the French and it is indeed very, very good as a number of the actors involved in this film discuss their thoughts on L'Enfer and Danis Tanovic's work. I highly recommend that you take a look at it, this if not a "filler".

As mentioned above I do not consider this to be a poor film, it is quite good in fact, just not something I find worthy of associating with the Kieslowski name. The jury is certainly out and I do believe that the more people see L'Enfer the more colorful will be the responses. There is indeed plenty to discuss here and hopefully when L'Enfer surfaces in R1 land its presentation will be substantially better. As to the R2 UK disc and its quality…a total mystery which I am unable to explain. RENT IT.

Note
This review was made possible with the kind assistance of Xploited Cinema.