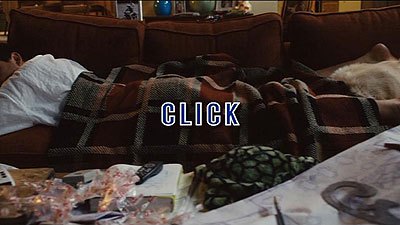 The Movie
Adam Sandler isn't exactly what audiences consider a leading man, but they'll watch him take a kick to the crotch any day. It's the problem successful comics always face, and one Sandler is already familiar with, after the weak reaction his serious turn in Punch Drunk Love received. Moviegoers simply have their expectations of actors, and hate when they aren't met.

Click isn't quite a Merchant Ivory movie, but it's certainly not Little Nicky either. It's the latest in Sandler's transformative phase, which has seen him make good films (Spanglish), OK films (Anger Management) and awful films (The Longest Yard), in an effort to stretch beyond his usual clowning. Here, as family man Michael Newman, he straddles the line, with lots of the frat-boy silliness that made him a star, and a healthy dose of heartbreaking drama.

Michael is an architect trying to make partner at his firm by doing everything his asinine boss (David Hasselhoff) asks of him. As a result, he works overtime constantly, on holidays and weekends, and has no time for his wife Donna (the lovely Kate Beckinsale), or his two kids. Some late-night TV difficulties catches this stressed-out guy at the wrong moment, sending him to Bed, Bath and Beyond looking for a remote to replace the various clickers that are driving him crazy. There, in the "Beyond" section, he meets Morty (Christopher Walken), who has a unique universal remote for him. This remote programs itself, but that's not all it does, as Michael soon learns, while muting his dog and then fast-fowarding through his "business." 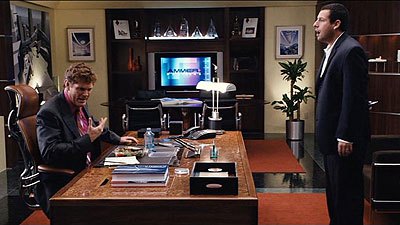 Owning a remote that controls his life (with some features that DVD fans will absolutely appreciate), quickly becomes addictive, and Michael skips through anything that bothers or annoys him. Unfortunately for him, the remote becomes programmed as to what annoys him, and he begins missing chunks of his life. It's classic "watch what you wish for"storytelling , as the remote takes over and he ends up clicking past the biggest moments in life. It's a pretty good metaphor for modern life, as this technological convenience, which is suppose to make life easier and give us more time ends up eating up more of it.

As stated before, you expect comedy from Sandler, and there's a great deal of it, including the requisite farts and kids cursing, which is admittedly amusing. But for most of the film, Michael is a pathetic character, whose life is going on without him, leaving him lost in his own body. Though his daughter's continued physical development is played for laughs, his absence in their lives is not, and it's frequently harrowing, no matter how many gags are shoehorned in. As the father of a newborn, whom I see only early in the morning and late when I get home, the film often tugged at my heartstrings, getting me to the verge of tears, and at times pushing me over the cliff. It's impressive when schmaltzy moments like those in this film actually get a reaction from a cynic like me.

Sandler is his usual solid self, playing the everyBuffoon with his typical ease, while Walken is at his odd best, pushing his halting delivery to the extreme, creating a very unusual character. Few other players get to do much of anything in this very Sandler-focused story, though Julie Kavner and Henry Winkler are highly entertaining as Michael's kvetching parents, while Winkler gets to be the catalyst to one of the most emotional scenes in the movie. You'd have to be pretty cold to not be moved by the concept, if not the execution. I never thought I'd be touched by a Sandler movie, but this one did it. 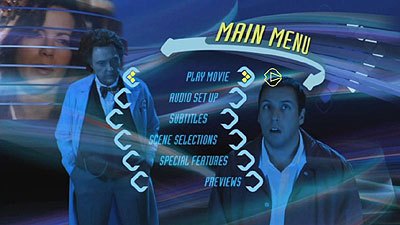 The DVD
This one-disc release is packed in a standard keepcase with a promotional insert and a three-dollar coupon good on select Sony DVDs. The keepcase is inside a slipcover that repeats the cover art, which is one of the most plain pieces of cover art I've seen in a long time. Why we needed to see it twice is beyond all logic. The disc has an animated anamorphic widescreen main menu, based off the life menus in the film, with options to play the film, adjust languages, select scenes and check out special features. Audio options include English and French Dolby Digital 5.1 tracks, while subtitles are available in English and French, along with English closed captioning.

The Quality
The anamorphic widescreen transfer on this DVD is very nice, though it feels a bit dark throughout the film. The colors are solid, especially during the scenes set in the future, where lots of special effects are used along with plenty of neon lights. The level of detail is consistently high, to the point where you can see the separation between the visual effects and real film in spots, and there's not a bit of noticeable dirt or damage, nor any obvious digital artifacts.

For a dialogue-driven comedy/drama, the Dolby Digital 5.1 soundtrack is surprisingly active, with a good deal of movement in the surrounds, where atmospheric noises and music enhancements boost up the sound. Some heavy bass kicks in with the special effects, and the dialogue is crisp and clean. It's a pretty impressive mix.

The Extras
There's a couple of extras included on this disc, starting with a feature-length audio commentary featuring Sandler, director Frank Coraci and a few of their buddies from the film. It's a classic group track, with everyone trying to get in on the action, but Sandler is surprisingly adept at acting as moderator, asking questions that spur the commentary on, and pointing out interesting on-set stories. It's a solid, informative bonus feature that you might not expect.

Seven short featurettes make up the bulk of the remaining extras, and run a combined 31 minutes. They cover mostly production topics, like the film's design and special effects, and do a good job of showing how some of the effects were achieved. They're followed by four deleted scenes can be viewed separately or all together, three of which are mildly amusing. None of them would make the film any better through.

The disc finishes with an insane 17 trailers, none of which are Click. 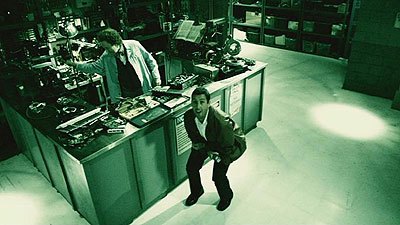 The Bottom Line
It's just barely an entertaining film, as it spends so much time bumming the audience out, but it's definitely an interesting one, as the concept is handled better than one might expect. It's closer to a chick flick than a Sandler film, as the moralizing is far from subtle and the sadness piles on in heaps, so tread carefully when approaching the DVD. An excellent audio and video presentation joins with a view extras to make this worthy of a purchase if you enjoy the film. A cross-promotion with a tissue company would have been nice though.