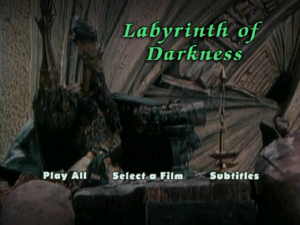 Jiri Barta is a much heralded figure in animation circles. The Czech filmmaker has built his reputation on a series of wondrously strange films that combine live-action, hand-drawn animation, and stop-motion in exciting ways. Dating from 1978 to 1989 and running in lengths that span from six to sixty minutes, eight of his shorts have been collected on DVD at long last. Jiri Barta: Labyrinth of Darkness is a great boon for animation fans looking for something different. The only downside is the production values aren't as good as they should be.

* A Ballad About Greenwood (11 minutes - 1983): A man splits open a tree stump and the splinters of wood come to life and engage in a sort of mystic ritual in the forest. Barta has illustrated faces on the wood, making them part of the natural interior grooves of each splinter. He intersperses the animated figures with shots of real landscapes and time-lapse footage of the growth process within the woodland environment. The suggestion is that all of this life is interconnected, but rather than go for a schmaltzy circle-of-life routine, Barta instead follows the wood on a surreal journey with dreamlike transitions where one story element flows into the other. The end result is more visually stunning than illuminating, but cool all the same.

The video quality isn't all that great, which is a shame for a program that's entirely reliant on images. There are flickers, scratches and spots, and even the occasional color error. The sound is mixed a little low, as well. It looks to me like a direct transfer from whatever source material being used, with little or no attempt to spruce it up. It's probably the worst looking of the set, but at least it's out of the way early.

* The Club of the Laid Off (25 min. - 1989): Set in an empty flat where damaged, retired mannequins are stored, Barta brings those mannequins to life, showing them trying to carry out their prescribed function even though they have been removed from their regular workplace context and are broken and missing pieces of themselves. When newer, flashier mannequins are dumped into the apartment, a war erupts as old meets new. The obvious social commentary is actually pretty much left up to the viewer. There are many possible interpretations of The Club of the Laid Off. It could be an editorial on the plight of the modern worker in a society that is becoming less and less human, or merely a hallucinatory look into the secret life of plastic replicas of people. I saw it mostly as a humanist fable about how each individual continues to search for meaning through action regardless of circumstances. Like Camus' The Myth of Sisyphus. But with mannequins.

This film is dark by design, but it's not helped by a murky transfer. 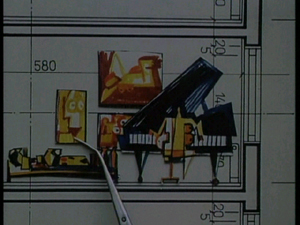 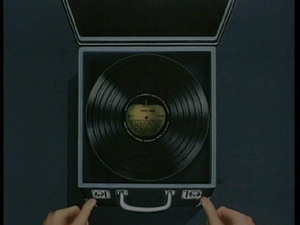 * The Design (6 min. - 1981): A pair of hands draws up a set of blueprints for a high-rise apartment building, accompanied by the sounds of real building. This playful entry would be at home as a short film shown on Sesame Street, and I mean that in a good way. Once the building is all laid out, the unseen architect fills it up with colorful families, the music morphing to fit the style of people who he is moving in. In the end, though, innovation gives way to conformity, and the structure becomes just another part of mass culture.

The transfer for The Design is one of the cleaner amongst the Labyrinth of Darkness set. There are still some obvious scratches, but less than in many of the other films and the colors are bright.

* Disc Jockey (10 min. - 1980): A mostly black-and-white pastiche of drawn images and the occasional real object, Disc Jockey has a style similar to Monty Python-era Terry Gilliam animation. Using entirely circular objects (plates, drains, dashboard dials, LPs, etc.), it tells the story of one night for a DJ as he gets ready, drives to the club, and spins his records. As one might expect, the storytelling is circular, too, taking us right back to where we started.

The transfer for Disc Jockey is almost completely clean. There must have been a good source available for it.

* The Last Theft (21 min. - 1987): Barta's only film done entirely with live-action footage. An unsuspecting crook is in the middle of robbing what he thinks is an abandoned home, only to discover its owners are still there. Except, there is something strange about them, and after luring him into a rigged game of dice, they reveal their supernatural secret.

The Last Theft is a spooky tale with an equally spooky style. Though filmed with real actors, Barta has manipulated the images in post production, playing with speeds and painting color on the figures and props--including a garish watermelon that is the impetus for the story's one authentic shock. The final product looks like old photographs come to life. Though there are some scratches on the picture, the ghoulish atmosphere of The Last Theft is preserved. 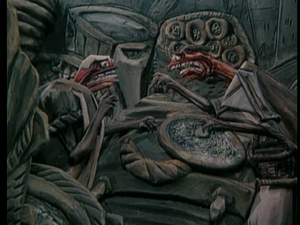 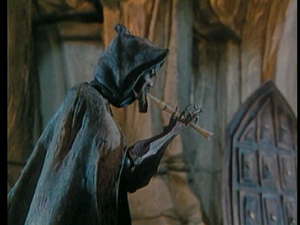 * The Pied Piper of Hamelin (55 min. - 1985): Barta's longest and most famous piece. He takes a familiar tale and twists it around, using stop motion animation to erect a town rife with gluttony. The citizens of Hamelin have resigned themselves to a life of drudgery and repetition, slaves to their own greed. Barta illustrates them trudging back and forth to work as flat figures straight out of a storybook, but styled more like woodblock carvings. They jabber at each other in a gibberish language, arguing over every little cent and playing cruel tricks on one another. Their city is bent and bloated, warped to look like an impressionistic painting, or something out of Picasso's cubist period. Only the rats that take over the town are consistently three-dimensional, decorated with real fur. The vermin taking over are a product of Hamelin's decadence, and the damage they cause brings the town to its knees. (I am pretty sure there are a couple of shots where real rats are used rather than animated ones.)

Enter the Pied Piper. He agrees to free Hamelin of rats for a price, and he makes good on his promise. When done, he falls in love with the only woman in the town who can't be enticed by material reward, though the corrupt imperial court has tried. In a scene of true beauty, the Piper plays her a song, and a painted garden landscape springs up, animated through time-lapse photography.

Of course, the chiselers who run Hamelin cheat the Pied Piper. Even worse, they rape and kill his new love. As befitting this darker retelling, the Piper doesn't exact his revenge in the accepted way. (Or has Barta gone back to the original, and this is one of many fairy tales that has been neutered over the years?) He's got something far more hideous in store than stealing Hamelin's children. Rather, he'll expose their true nature once and for all.

It's easy to see why The Pied Piper of Hamelin has taken the top seat in Jiri Barta's oeuvre. He has created a complete world and animated it flawlessly. As befitting the film's rank, the picture on this DVD is relatively free of glitches. If there is any complaint, it's that it looks a little dark and the edges on the figures are sometimes soft. 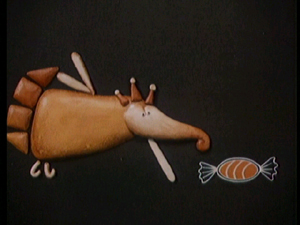 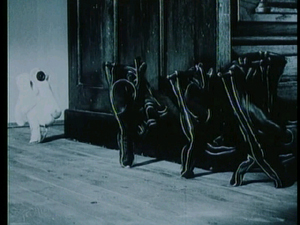 Riddles for a Candy; The Vanished World of Gloves

* Riddles for a Candy (8 min. - 1978): The oldest piece on the DVD, it whimsically morphs objects from one image to another as a creature of indeterminate origin chases a piece of candy through a storybook. The colors look good, but the film has a lot of surface scratches.

* The Vanished World of Gloves (16 min. - 1982): At a trash dump, a man finds a cache of discarded gloves, and among them is a canister of film. He takes it home and puts it on his projector, discovering the history of cinema in microcosm, told entirely with animated gloves. Parodies of the Keystone Cops and romantic melodramas give over to newsreel footage of a fascist glove rally, and then an orgiastic Fellini party and a post-apocalyptic sci-fi exploitation flick.

The Vanished World of Gloves is amusing and has gorgeous art direction. The Fellini scene in particular is opulent and garish; sadly, the colors appear faded.

This was my first actual exposure to the work of Jiri Barta, but it's easy to see what all the fuss is about. He adapts his visual style from film to film, finding a look that best fits the story he wants to tell. Ranging from wild experimentation to more structured storytelling, these eight animated movies are all entertaining, and some of them go even deeper, adding a layer of social commentary. One thing I noticed in a lot of Barta's work is that he is attracted to places that are forgotten or that regularly go unobserved. What happens to splinters of wood or department store dummies when people stop looking at them? As animation moves away from this sort of obsessive craftsmanship and into a digital future, Jiri Barta: Labyrinth of Darkness is an engaging time capsule of a true brand of artistry that will hopefully never go completely out of style. 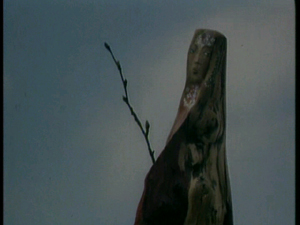 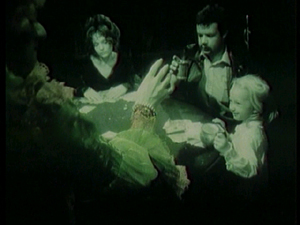 A Ballad About Green Wood; The Last Theft

Video:
All of the films are presented as full-frame features. The quality is so varied, I have chosen to critique the individual films as addendums to each summary of them. I really wish more care would have been put into this DVD to make the picture consistent from short to short. None of them are even close to perfect, and the highest grade I could comfortably give them is "acceptable."

Sound:
Presented in Dolby Digital, the sound on Labyrinth of Darkness is not very fancy, but it is serviceable. There is only one film with dialogue (Riddles for a Candy), and since it is in Czech, it is subtitled.

FINAL THOUGHTS:
Recommended. I wholeheartedly enjoyed the skewed vision of Jiri Barta, even if the DVD production did not match the level of his craft. One can only hope that someday there will be a much better version of Jiri Barta: Labyrinth of Darkness that will restore his gorgeous animation to its full glory, so that we can see treasures like The Pied Piper of Hamelin and The Vanished World of Gloves as they were intended. In the meantime, you shouldn't go without looking in on a world unmatched in its creativity. 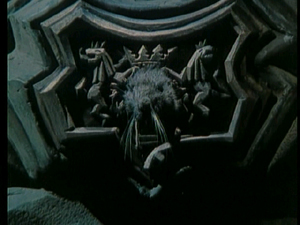