Off to War: From Rural Arkansas to Iraq 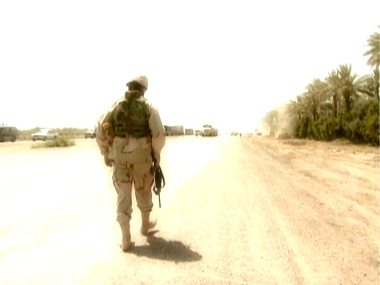 Passionate and personal, Brent and Craig Renaud's Off To War: From Rural Arkansas to Iraq (2005) is one of the better war documentaries you're likely to see. The reason: it's told from a down-to-earth perspective, balancing drama, emotion and genuine tragedy with energy to spare. The locally born-and-bred Renaud brothers offer a homegrown spin on the ever-looming War on Terror, mixing in plenty of questions and hesitation with the typical slow motion flag-waving. That's precisely the reason why Off To War works as well as it does, even with a lengthy total running time of over seven hours: it remains balanced and confident, even if some of our protagonists lose a bit of their original spark as the journey progresses.

This ten-part series leads us from Clarksville, Arkansas to Iraq and back again; before we know it, the 39th Brigade of the Arkansas National Guard returns with 39 less soldiers than it left with. Luckily, the ample time spent "behind the scenes" ensures that these aren't just nameless soldiers in fancy uniforms: these are real people, with families, friends and lives back home. Though they start their journey as "weekend warriors", we also get to see a notable degree of growth and focus among the soldiers---bonds are formed and tested under stress, friends are lost along the way.

Many dangerous obstacles lie ahead, from roadside IEDs (Improvised Explosive Devices) to unexpected surgeries. Serious injuries put several men out of action, often times indefinitely. The entire journey lasts roughly a year and a half, but their service marks a significant chapter in their lives (NOTE: Additional collections of footage from this journey are due for cable broadcast and DVD release later this year). 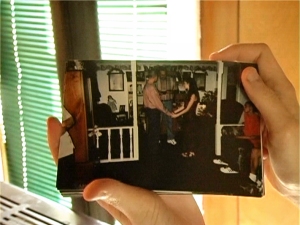 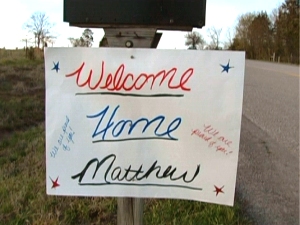 If that weren't enough, Off To War raises the stakes by showing how the troops' absences affect family life back home. Parents and wives are glued to the television, carefully inspecting 24-hour news channels for updates of any kind. Marriages are tested through time spent apart; babies are born to "single" mothers, holidays pass with empty seats at the dinner table. It all adds up to a potent and layered documentary, though it's safe to say that the harsh reality of Off To War may be too much for some viewers. Luckily, a few light spots help to soften the blow---and though the premiere episode offers plenty of tearful goodbyes, the final episode provides relief as many soldiers return home. Again, more than three dozen won't make it.

As a straightforward documentary, Off To War takes a refreshingly distant approach to its subject without seeming too far away. The Renauds don't interfere with their subjects, allowing dissenting opinions and doubt to mix freely with patriotic enthusiasm. Some viewers may feel tricked by this approach; after all, it's tough to invest so many hours in a series without getting any clear answers. As always, though, it's not about the destination, it's about the journey---and Off To War presents us with quite a challenging and layered journey indeed. Combining actual combat footage with heartbreaking, personal moments---including the funeral of a critically injured soldier---it's a moving experience that you won't soon forget.

Presented on DVD by Kino International, Off To War arrives in a surprisingly solid four-disc package. The technical presentation is about as good as expected, while a handful of current and retrospective bonus material broadens the scope of the package. Though a few minor nitpicks keep this from being a perfect release, Off To War is worth hunting down for documentary enthusiasts and drama fans alike. Let's take a closer look, shall we?

Presented in their original 1.33:1 aspect ratio, Off To War doesn't aim high visually but still hits the mark. Colors and image detail are fine for this standard presentation, while edge enhancement and pixellation don't seem to be a major issue. The audio presentation is basic yet equally satisfying, as this 2.0 Stereo English mix offers clean, clear dialogue and music. Unfortunately, no optional English subtitles or Closed Captioning are available for the episodes or bonus material. 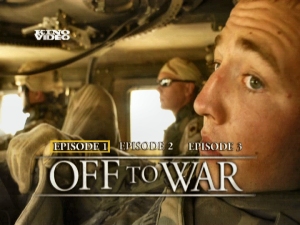 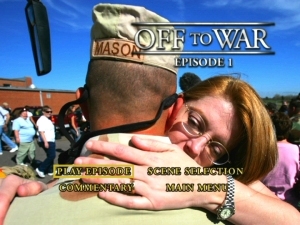 The menu designs (presented in 1.33:1 format, seen above) offer a clean layout and easy navigation, though several of the bonus features don't include a "play all" option. Each 43-minute episode has been divided into 16 chapters (NOTE: the longer 63-minute final episode contains 19), while no obvious layer changes were detected during playback. Off To War is given plenty of room to breathe; each disc includes three episodes, while the fourth holds the longer finale and a handful of extras. This release is housed in a handsome foldout digipak case; though no inserts are included, episode summaries have been printed on the packaging interior.

Bonus Features
Engaging and respectful, the bonus features for Off To War help to round out this package even more. Leading things off is a series of four Audio Commentaries (one per disc) with several episode directors and soldiers; they're obviously a bit more personal than technical, but these added layers of authenticity only strengthen the featured episodes. Also of interest is an extensive collection of Extra Scenes (19 clips, 69:10 total), which aren't all of interest but are nice to have anyway. Seen below (at left) is a modest Christmas display sent over by one of the soldiers' relatives. Presented in a 1:33:1 aspect ratio and in finished form, these scenes look to have been cut for timing purposes, not for content.

Next up is a brief Memorial (1:10) for the 33 members of the 39th Brigade who passed away in Iraq, as well as a Photo Album (self-navigating, below right) containing pictures and captions by 11 different soldiers. Closing things out is a series of Trailers (3 clips, 3:58 total) for other Off To War releases, as well as a series of Cast & Crew text pages. It's a surprisingly well-rounded collection of extras, especially for a low-budget television series. 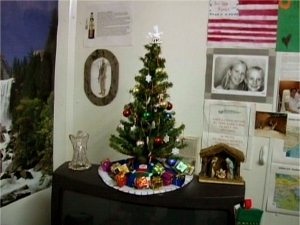 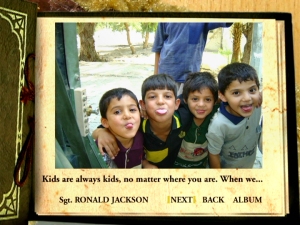 Even-handed and entertaining from start to finish, the ten-part series Off To War shows this complex, bitter conflict from a more personal perspective. Slow motion flag-waving is thankfully kept to a bare minimum, while the ten-episode format allows plenty of time to get acquainted with many of the different soldiers on board. Kino's DVD presentation is satisfying for the most part, offering a good technical presentation and plenty of thoughtful bonus material. While the lower replay value may keep casual fans from adding this to their permanent collections, Off To War is a solid boxed set that demands more than just a weekend rental. Recommended.