Other (International) // Unrated // June 28, 2006 // Region 2
List Price: $24.95 [Buy now and save at Xploitedcinema]
Review by Svet Atanasov | posted September 28, 2006 | E-mail the Author
The Film:
A beautiful singer (Leonor Watling) who has lost the ability to inspire is struggling to make sense of her life. Spending the remaining of her time in a wheelchair Laura is having second thoughts about what it means to be.

14-year old Gonzalo (Gonzalo Pedrosa) has had enough of the real world older people are living in-empty ambitions, lies, promises that are never kept-Gonzalo does not want to be a part of it. He decides to spend the rest of his life in his tiny room, in front of his computer.

Ana (Nathalie Poza), Gonzalo's mother, works in a social center where immigrants come for help. After she is unable to help an African immigrant reunite with his brother who has been detained in London Ana witnesses a scene that will forever change her life.

Mikel (Javier Camara) is an ex-convict who can not get over an affair that has changed his life. He wants to take one final look at the man he is still in love with. But…times are different now! 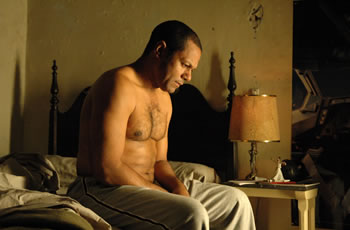 It is difficult to tell what sort of resonance Manuel Martin Cuenca's latest film Malas Temporadas a.k.a Hard Times (2005) will have with North American audiences. Structured in a manner that somewhat mirrors what Cedric Klapisch did in his L'auberge Espagnole a.k.a The Spanish Apartment (2002) where a group of colorful characters had to learn from each other this recent Spanish production unites its characters through their desire to escape real life not celebrate it. Furthermore, while in The Spanish Apartment there was plenty of humor that made the film quite appealing to the mass public in Hard Times the story each of the characters shares is dark, gloomy, and quite disturbing.

The film also takes quite a bit of time to link all of the scattered stories (eventually all of the leads in Hard Times will cross paths) thus providing the audience with ample opportunities to pick a favorite character. Which as the story progresses turns out to be quite a difficult task as they all struggle to provide their lives with some sort of a rhythm!

Having seen Manuel Martin Cuenca's previous film La Flaqueza del Bolchevique a.k.a The Weakness of the Bolshevik (which is available as an English friendly release in Spain) there is absolutely no doubt in me that what we have here is a name that shall create plenty of noise in the years to come. The narrative in Hard Times is very impressive, the performances by the main cast simply outstanding, and the eclectic soundtrack by Marlango (led by the beautiful Leonor Watling) is truly an event that begs to be recognized.

Impressive!! Presented in its original aspect ration of 2.35:1 and enhanced for widescreen TV's the print appears to be in an immaculate condition: excellent progressive PAL transfer, rich and very well reproduced colors, a fine and natural degree of grain during the night scenes, very delicate contrast, and last but not least not a single speck or mark to spoil the perfect presentation. As noted above this is one extremely well produced DVD. Region 2, PAL-encoded.

Just as impressive as the video presentation described above!! Presented with its original Catalan track mixed as a 5.1 track and an optional Euskera-Basque 2.0 dub the audio is magnificent. The dialog is very easy to follow and the sublime downtempo-jazzy score by Marlango is a pleasure to listen to. The disc comes with optional English and French subtitles-white in proper font.

Unfortunately none of the extras on this disc are subtitled in English so I am just going to list them for your information: a trailer, stills gallery, Making of, a list of nominations and awards, cast and crew information.

Spectacular film!! Very modern and with enormously powerful performances by the main cast Malas Temporadas certainly proves what currently should be obvious for many-Spanish cinema is in a state of contemporary Renaissance! I love everything about this film-HIGHLY RECOMMENDED!