A disturbing social drama about a Croatian prostitute (Chulpan Khamatova) living in Vienna with her son whose life is a never-ending struggle to accept the obvious Hurensohn a.k.a The Whore's Son (2004) feels very much like something Swedish director Lukas Moodysson would cook up. Raw, provocative, and unsettling this co-produced by Germany and Luxembourg film does not shy away from showing it all.

Far and away is The Whore's Son however from the convincing storytelling of Lukas Moodysson. Based on the book by Gabriel Loidolt the script for this rather unknown in the US film appears notably flawed in key areas that tend to be easily singled out. The dialog, the main area of concern here, is not on par with the impressive camera work and for the most part it clearly shows-clichéd lines, overdone slang, and wannabe smart quotes prevent The Whore's Son from being something truly special. 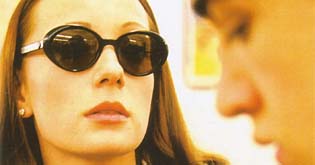 In fact, I am puzzled why the dialog appears so rough in this film. The cast (with notable performances by art-house regular Chulpan Khamatova and Serbian icon Miki Manojlovic) does a superb job in providing the story with quality acting yet the script writer has visibly limited their chance to excel. Stanislav Lisnic, the young boy who plays the whore's son, is also a questionable choice for the character he has been asked to embrace. His acting is not on par with the rest of the cast contributing here and during key scenes where the director appears to be making a statement there is some (awkward) uncertainty in his lines.

What really confuses here, however, is Michael Sturminger's delicate camera work! It is quite unusual to see a filmmaker with so much understanding about the direction he wants his characters to follow…and then discover that he has been left somewhat alone in putting together the pieces of a script that is notably flawed. The Whore's Son is a film with so much polarity!! 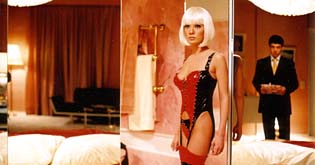 Finally what forced me to dislike Michael Sturminger's film even more was the clichéd look at Vienna and its immigrant life. There is not a tiny bit of originality here and the manner in which the story is told (once again the production values are disastrous) left a bitter taste in my mouth. Vienna could have easily been replaced with just about every other large European city and you would not have even noticed. To top it off the Croatian immigrants and their struggles are painted in familiar colors that are as predictable as any other immigrant story you have seen. What a missed opportunity!!

In 2004 the film won the Prize of the Minister President of the State of Saarland at the Max Ophuls Film Festival (Michael Sturminger). During the same year the film also won the Flying Ox Award for Best Director at the Schwerin Art of Film Festival, Germany.

Presented in its original aspect ratio of 1.85:1 and enhanced for widescreen TV's the film looks quite good: contrast is excellent, colors are vivid and natural, edge-enhancement does not appear to be an issue of concern, and I could not detect any print damage. There is a tiny bit of macro-blocking that I noticed during two of the night scenes (when the boy walks in the snow is the most obvious one) but overall the image quality is good. Finally the disc appears to have been properly mastered therefore there are no conversion issues here that would detract from your viewing experience.

Presented with its original German language track (and a few very small portions of Serbo-Croatian) in 2.0 and 5.1 mix-options the audio is exceptionally good. Crystal clear and crisp the dialog is very easy to follow and the splendid music score comes off the speakers marvelously. The distributors of this DVD have also provided optional English, French, and Spanish subtitles.

Aside from the theatrical trailer for The Whore's Son you will also find a gallery of trailers for other upcoming or already released by PictureThis productions.

I have truly come to like what PictureThis provide for the US market!! Their films are always bold, provocative, and full of originality. With The Whore's Son I am slightly disappointed even though as a whole the film is far from being a disaster. I suppose my expectations were too ambitious. Nevertheless I am a big supporter of PictureThis (and their collaboration with BAC) and can not wait to see their next release!