Amidst the lonely hills of Obaba, a mythical village set in the far Northern hills of the Basque Provinces, a beautiful outsider (Barbara Lennie) is planning to film how the locals live their lives. Upon arrival however Lourdes is told about an old mystery involving a man with an unusual obsession for lizards. As the young filmmaker begins her project she is introduced into a world of strange memories, some still haunting their owners. 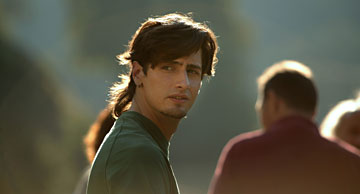 Spain's official Oscar entry Obaba (2005), a film based on Bernardo Axtaga's work Obabakoak and directed by Montxo Armendariz, is undoubtedly one of the most complex stories I have seen in a very long time. Structured as a collage of flashbacks, each with its own main protagonists and a beautiful story to tell, Obaba is not only ambitious it is one enormously demanding film as well. Fortunately enough Montxo Armendariz and his team have done an outstanding job of linking the scattered bits in this ambitious tale.

It is difficult for me to explain precisely what takes place in Obaba. The story, as summated above, evolves around a beautiful filmmaker whose world collides into the strange reality of Obaba-a place where colorful myths come to life. And when Lourdes begins to read between the lines of what she is told by the locals something most unusual happens.

Without giving up the plot of Obaba I would like to provide you with two pointers so you could understand how brilliant this film is:

First, keep in mind that each story Montxo Armendariz has chosen to tell us (only a few of Bernardo Axtaga's short stories are adapted for this film) has a special place in the final string of events-the way the camera moves, the objects that become the focus of attention, even the love affair between Lourdes and the handsome dark Spaniard (Juan Diego Botto), everything in Obaba has a special meaning.

Second, do not attempt to link all of the stories prematurely. It would be sufficient if you simply kept track of why they were told in the order they appear in Obaba. The film brings everything to a closure in a perfect fashion delivering a much broader explanation as to what precisely takes place here. In fact, I would go out on a limb and state that if you disliked what Michael Haneke did in Cache then you won't appreciate how Montxo Armendariz closes its story-the heavy symbolism and the philosophical overtones are crucial for this film. 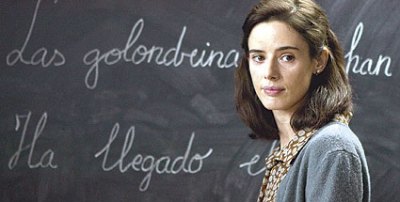 To sum it all up I thought that from all the Spanish productions I've seen lately Obaba is indeed the best and most meaningful one. The Spanish Film Academy did what they should have and nominated this film as the country's official Oscar entry. I am enormously impressed with Obaba and for what it matters will definitely include it in my Top 10 picks at the end of the year. Outstanding!!

Presented in its original aspect ratio of 1.85:1 and enhanced for widescreen TV's this DVD comes courtesy of Spanish distribs Manga Films and as far as I am concerned has very few issues that we need to discuss here. The image is beautifully reproduced and the print Manga Films have delivered simply shines-excellent contrast (very delicate in each of the stories-sometimes soft where the story shifts back in time sometimes sharp and edgy when the director takes its audience back to present days), very good color gradation, not a single speck or dirt-spot that I could detect, and finally a tight progressive conversion. I did notice a smidge of edge enhancement during one of the winter scenes (some of the snow was a bit too heavy for my taste) but to be honest I am perfectly satisfied with the video presentation. PAL-encoded, Region-2.

This DVD comes with two different audio options: there is a 5.1 Basque track (Euskera) and a Castellan-Spanish 5.1 track. I am not fluent in the Basque dialect spoken here so I can not comment whether or not anything has been omitted in the English translation. I can comment however on the syntax (English subtitles) and there is absolutely nothing here a native English-speaker would be unhappy with. As far as the technical presentation goes the beautiful soundtrack has been mixed to perfection and there is plenty of movement that you will notice from your rear speakers. To sum it all up Manga have done an excellent job in the audio department as well. Finally, Obaba comes with optional Castellan, Basque, French, and English subtitles (all in proper white font).

Unfortunately none of the extras on this Spanish DVD appear with optional English subtitles. So, I have decided to only list them for you without commenting as to avoid providing you with improper comments (it is worth mentioning however that the "special effects" section is outstanding….see how those green lizards are done!!).

The Making of Obaba (with multiple interviews)-

This film is everything I love about cinema: thought-provoking, evocative, beautiful to watch, with a script to die for executed to perfection. But I suppose Spanish cinema proved too intellectually-demanding for some Academy members this year and they quickly sent Obaba back to where it came from (does Obaba even have a US distro-deal, I am unsure).

I rarely give non-R1 DVDs where the extras are not English-friendly the DVDTALK Collectors Series mark but it would be a crime if I awarded Obaba anything less. I watched my screener twice already and the film shows even more potential after the second viewing. If searching for a thought-provoking piece of cinema…see what the Spanish Film Academy has been raving about. They've got it right!!!

Note:
This review was made possible with the kind assistance of Xploited cinema.