Andrei Tarkovshy was a Russian director who made slow paced, hypnotic films filled with beautiful images and thought provoking themes. His masterpiece is Stalker, one of the most gorgeous and entrancing films ever made. It has been hard to find in region one for a while but Kino has remedied that with their new release of the movie. This is really a film that defies description. A science fiction film, a philosophical drama, and a metaphoric excursion, Stalker is all of this and yet so much more. A film that is more experienced than just viewed, this is a must-see for anyone interested in film as an art. 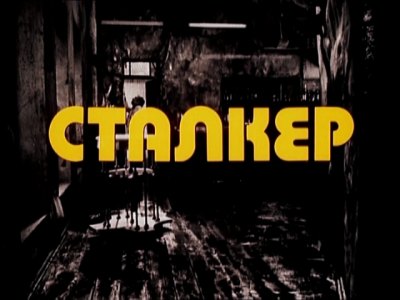 Something happened. Maybe it was aliens landing. Or maybe it was a meteor strike. But something happened and The Zone was created, an area where things don't work as you'd expect them to, where the laws of physics are out of whack. People started disappearing in The Zone and so the government sent in the army to investigate. They were never heard from again. Ever since that time The Zone has been cordoned off with sever penalties for going into it.

People still go into The Zone however, mainly because of The Room. In the center of The Zone, as the story goes, there is The Room which will grant those who enter it their deepest wish. To get to this miraculous place is impossible without an experienced guide, known as a stalker. As the movie begins a famous author, burned out and cynical, and a scientist, quiet but rebellious, (who are known only as Writer and Professor throughout the film) hire Stalker to lead them through the dangers of The Zone. Each of them have their own reasons for going, including Stalker himself, and their journey isn't without peril and danger. Along the way this trio is forced to look at themselves and each other and examine their hopes, dreams, and beliefs. What is worth risking your life for? 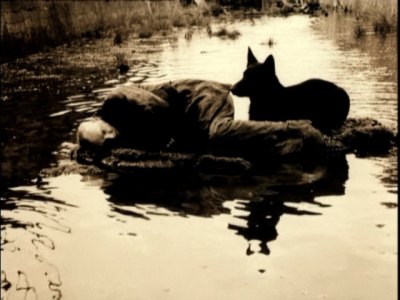 This film is a work of art, yet many people won't like it. It is a slow moving film, there are no action sequences or fight scenes, and the most suspenseful segment has a man slowly walking through a tunnel. It is terribly engrossing nonetheless. The movie runs two and a half hours but is never dull or boring. (I've seen the film three times and each time I start it I figure I'll watch the first half only. It never works that way. I get so involved that I have to watch the whole thing even if it means I'll lose a good hour or so of sleep.)

There are two reasons for this. First, it is a gorgeous film. Each shot is a perfectly framed and composed picture that you could hang on your wall. Though a lot of the movie shows old and rotting buildings, the film is one of the most beautiful things ever filmed. Takkovsky can turn everyday discarded objects into art just by putting them in front of his camera. His composition and direction are flawless; each and every scene, and the objects in each scene, work well and serves to bring the viewer into the film. 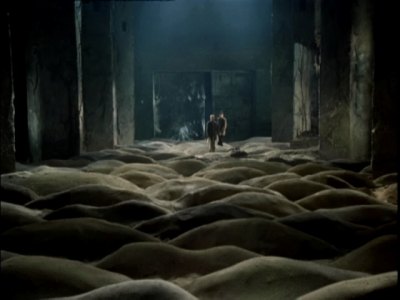 The other reason this is such a mesmerizing film is because viewers have to figure out the meaning of the events that transpire by themselves. There are clues scattered through the film, images that obviously have meaning, but the meaning behind them is often obtuse. The beginning of the film is all sepia toned until the party arrives in The Zone, when everything becomes color. That's easy enough to figure out; life in the Zone is more 'real' than life in the real world (at least to Stalker.) When the narrative switches back to the area outside of The Zone at the end, it's once again in sepia tones, with the exception of Stalker's crippled daughter. Whenever you see her face, the image is in full color. Is that because she was formed from part of the Zone or because she give Stalker the same 'alive' feeling he has when he's in that forbidden place? There are interesting things like that throughout the whole film. It's like a jigsaw puzzle just waiting to be put together.

I could go on about the religious iconography, the metaphors that Tarkovsky uses and how the director returns to certain themes that are in his other films, but that's not the point of this review. Suffice to say that if you enjoy thought provoking films filled with lovely images, this is a movie you should buy. Like a great painting, you can't absorb this film by seeing it only once and investing in the DVD would be very worthwhile.

This film was originally broken into two segments. The previous releases have put each segment on a separate disc. The folks at Kino did it a little differently with this two disc set however; they put both parts of the movie on the first disc and reserved the second disc for the extras. 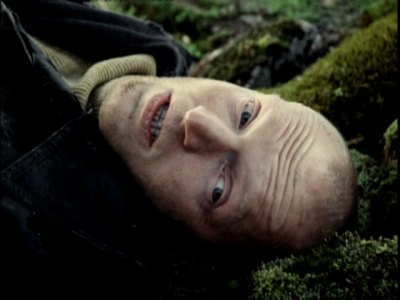 This disc has both the original mono soundtrack and a DD 5.1 mix in addition to two overdub tracks in English and French. (More on those in a bit.) There are also optional subtitles in English, French, and Spanish. The audio is acceptable though not outstanding. There isn't a lot of range, but since the movie is mainly dialog driven this isn't a large concern. The voices are easy enough to hear, though sometimes they sound a little muddled. There isn't any distortion or other major audio defects.

I preferred the mono track, mainly because it was the track that Tarkovsky himself authorized. This is the way he intended the film to be heard, and that's good enough for me. I did listen to the DD 5.1 track for a while, and though it was fine it didn't do much for me. There wasn't' much panning, even when there could have been such as when a train roars by, and it sounded like they mainly threw the various sounds to different speakers rather than actually constructing a dynamic sonic environment.

There are also two overdub tracks. In these they hired a single person (notice I didn't say actor) to read all of the dialog lines right after the actors say their lines. You can still hear the original Russian, they just added another voice. This was absolutely horrible. The guy they picked read everything in a monotone and since he said it after the actors started speaking, it was a bit confusing. I can't imagine any one buying a foreign movie who didn't want to read the subtitles, so I'm at a loss as to why this was done. Do yourself a favor and avoid these tracks. 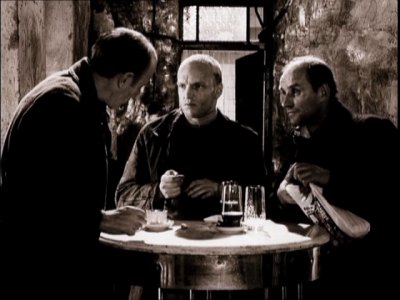 I was really hoping that Criterion would acquire the rights to this film and release a definitive version. Unfortunately, this wasn't to be the case. Kino appears to have used the same PAL master that the earlier releases of this film used and it naturally suffers from the same problems.

The full screen image was acceptable, but the disc does not have the clean and clear image that this movie deserves. The image is generally soft and it doesn't have the level of detail that I was hoping for. Some scenes, especially the close-ups, are nice and sharp, but these were in the minority. Smaller objects and fine lines are not well defined, and the image gets a bit blurry in the background. I would guess that a lens with a narrow range of focus was used and that could account for some of what I'm seeing. The contrast isn't all that great either, especially in the sepia toned beginning. The black coats the men are wearing have no detail and look like flat patches of darkness.

Digitally the disc has some problems too. There is some aliasing and macroblocking present, and sometimes the stationary objects will shimmer and move when the camera pans across them. Look at the decrepit bus, for example, when the trio first arrives in the Zone. The roof jiggles as it moves across the screen. There is also a fair amount of mosquito noise in the picture, especially in area of one color.

As mentioned above, this disc was created from a PAL master, and it suffers from the defects associated with that. There is the 4% PAL speed-up, and ghosting does occur in some area. Luckily ghosting is most evident in fast motion scenes and there aren't that many in this movie.

Having said all of that, this isn't a horrible transfer. Yes, it could be a lot better, but the image is still very watchable. Though I was hoping for something better, no one should avoid this disc based on the video alone.

How does it look compared to other versions?:

I compared this version with the region 0 Ruscico import (not the Image version but a Russian printing of the disc though it appears to be identical to the domestic Image release) and there were a few differences, but they were minor. The Kino version is more generously cropped, with just a tad more image on all sides. On the other hand there is a but more compression artifacts that are visible, the aliasing is just a tad worse. This is a minor matter, and I could not find any one scene that had a drastic difference. Every time I'd discover a blatant flaw in the video, it would be present in both images, almost to the same extent. If you have an earlier version, there's no need to upgrade. 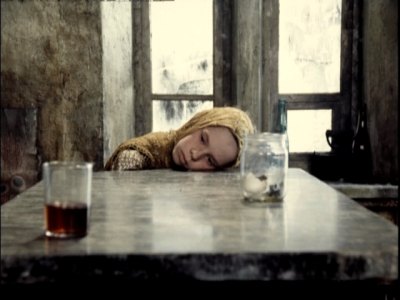 This disc has the same extras as all of the other releases of this film (at least the editions that I'm aware of.) There are interviews with composer (21 min), cameraman, (5 1/2 min) and the production designer (14 min). These were all very interesting, especially the latter. They all discuss Tarkovsky's attention to detail and perfectionism, but there are also some revealing anecdotes about the production and the problems they encountered. (The entire first half of the film had to be reshot after the developing lab ruined the film. Unfortunately they didn't have any more money or time, so the entire movie was shot on half the budget and time that were originally planned.)

There is also an excerpt from Tarkovsky's The Steamroller and the Violin, the movie he made as a graduation requirement while in film school. This shows that early on the director had a wonderful eye for composition.

Memory is a 5-minute film that shows Tarkovsky's childhood home, now abandoned and falling down, intercut with similar scenes from Stalker. I wasn't impressed with this that much. If the film makers wanted to try to replicate Tarkovsky's knack for making refuse look beautiful, they should have done it without using footage that he shot.

This film easily makes it into my top ten films of all time. The story, the cinematography, the mystery and the perfect direction all make this an amazing, stunning movie experience. I really wish the video quality was a little better. While it's acceptable, this film deserves a ground up restoration. If you enjoy films that make you think, where not all the answers are laid out on a silver platter this is the movie for you. Highly Recommended.