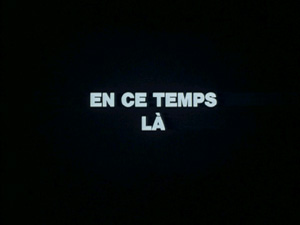 Jean-Luc Godard's Hail Mary (Je vous salue, Marie) apparently sparked off a hailstorm of controversy on its release in 1985, something that the folks at New Yorker Video hammer home on the DVD sleeve at every opportunity. Maybe I'm just jaded or too hard to shock, but it's hard to see now what all the fuss was over. I don't see much to be scandalized about in Hail Mary.

Really, Godard has composed one of the most human and touching portrayals of the Virgin Mary ever put to film. In his recasting of the Biblical story, Mary (Myriem Roussel, First Name: Carmen) is a teenager who has hung on to her virginity, even in the face to her engagement to the petulant taxi cab driver Joseph (Thierry Rode). Thus, it causes a lot of confusion when an older man named Gabriel (Philippe Lacoste) and his daughter (Manon Andersen) get in Joseph's cab and direct him to the gas station owned by Mary's father. There, the angelic duo informs the poor girl that she will soon have a child. This enrages Joseph, who knows he has never touched Mary and so can't claim the child as his own. Initially, Mary's protests that she is still innocent fall on deaf ears.

Eventually, Joseph comes to trust what Mary is telling him, but not before he whines a lot about not getting any loving. He's not the most compassionate person that could have been charged with the paternity of the Christ child. At the start of the movie, he is taking out his frustrations over Mary's refusals by toying with another woman (a young Juliette Binoche in only her fourth movie), and he shows as little concern for this second girlfriend's feelings as he does for the emotional turmoil his fiancée has been thrown into. Joseph won't be satisfied until he sees Mary naked, plain and simple. Gabriel eventually knocks him into line, however, forcing him to dress like a grown-up (Joseph had been wearing dark shades and kept his collar popped up until that point) and physically forcing him to vow to leave Mary's virtue where it is. If he doesn't, Joseph will mess up the divine plan. In a self-reflexive move, Godard illustrates the notion of God's Will being disrupted by having Gabriel forget his proper lines whenever he's faced with Joseph's impudence, something the little girl consistently points out to the older angel.

This question of a greater plan for humanity is one of the bigger things Godard is wrestling with. Outside of the Mary narrative (though the two cross over in Joseph's taxi), a haughty professor (Johan Leysen) lectures his students about man's placement in the universe, theorizing that we are not the product of a series of random accidents, but rather extra-terrestrials from a distant star who migrated to Earth centuries ago. Godard seems more eager to send-up this pseudo science than he is religion. The professor gets involved with one of his students (Anne Gautier), a woman named Eva who he insists on calling Eve. She apparently is his temptation, and after draining her of her money, he leaves her to go back to his wife and kids. This great brain with grand ideas of otherworldly beings is really just a pig of a man after all. 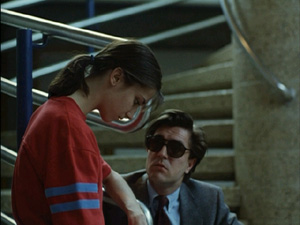 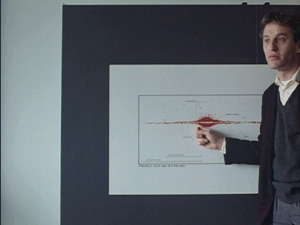 Yet, the professor's lectures tie in with Mary's quandary, a variation on the chicken or egg conundrum: does the soul exist to animate the body, or does the body exist to house the soul? Her body is what she feels is under assault. It's what Joseph wants to get his hands on, it's what God has used to plant his seed. Her soul is ultimately her own, and it's tied directly to her virtue. The greatest pain the Supreme Being has caused her is making people doubt that she has maintained self-control, that she hasn't given her soul over to lust. Despite the anger this causes her, Mary perseveres.

In the end, though, it's hard for Mary to tell if the price she has paid was worth it. Her son Jésus (Malachi Jara Kohan) has turned out to be a brat, and her husband has gone from adolescent sex fiend to resentful father. (Godard had specific ideas about the impact of Freudian theory on religion, and Joseph's resentment of Jésus is classically Oedipal.) When it's all said and done and she is met with a cry of "Hail Mary!" on the street, it's not clear whether it's sarcastic, disdainful, or honest. All the virgin mother has left to hold on to as she quietly applies lipstick is the womanhood she refused to let anyone take. Perhaps that's what religious groups objected to, that after all the struggle and doubt, this gospel of modernity was a muddle of anxiety and angst.

For Godard fans, the cantankerous prankster from the '60s is definitely up to his old tricks in Hail Mary, though this film is closer to the provocateur of Weekend than it is the playful imp at work in A Woman is a Woman or Masculin féminin. At times his odd choice of framing and quick cuts between oblique statements of dialogue are almost too close to being the cliché parody of European art house cinema, but the more personal this film gets, the deeper the director goes into Mary's dilemma, the more assured his hand. His trademark love for monkeying with sound is in full form in Hail Mary, as well. He uses pieces of music by Bach and Dvorák throughout the picture, dropping the orchestra out the second someone speaks and then kicking it back in again as soon as they finish their line. It works both as an illustration of the sensory pressure Mary is under while also undermining the grandiosity of the situation. The coming of the messiah in the mid-'80s isn't nearly the event it was two millennia prior. 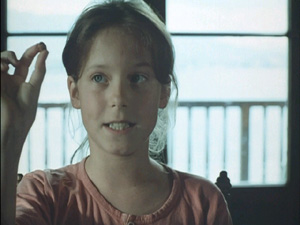 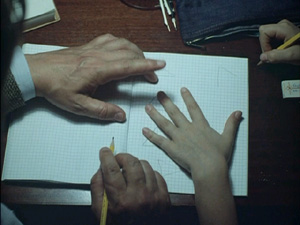 The Book of Mary

When Hail Mary was first released, it traveled as part of a double bill with Anne-Marie Miéville's short film The Book of Mary. Miéville was a Godard collaborator who wrote First Name: Carmen and was the editor on Hail Mary. New Yorker preserves this dual feature by putting The Book of Mary on the DVD, as well, but not as a bonus, as part of the main program. (Though, you do have the options of either "play all" or choosing one of the films individually.)

Miéville's film differs greatly from Godard's, however. There are no religious themes nor experimental film techniques. Yet, The Book of Mary goes well with Hail Mary as both deal with parent/child relations. Mary (Rebecca Hampton) is a young girl whose parents are splitting up. To cope, she enters into elaborate flights of fancy, giving detailed lectures on medical procedures and Baudelaire, or conducting her own imaginary symphony. The young actress is a dynamo in the role, launching into Mary's performances with zeal and bringing a real pathos to her lessons about the double-edged nature of change.

Video:
Both films are full frame and given nice transfers. There is no surface grit or scratches on the picture, and though it doesn't appear to be a particularly high-end transfer, I don't think either movie was really shot as glitzy productions. Most likely, the look of the DVD preserves the original intent of the two directors. Of the two, The Book of Mary is more crisp and has richer colors.

Sound:
The original French soundtrack is here with English subtitles. No fancy mix, but everything sounds clear. In particular, Godard's manipulation of the audio in Hail Mary is still quite effective.

Extras:
The trailer on the DVD is from the original theatrical release and covers both Godard and Miéville's movies in one go. It is not subtitled. The second feature is a twenty-minute film called "Notes About Hail Mary." At first glance, it's a fairly standard making-of from when Hail Mary was made. Shot on video, it shows Godard rehearsing with his actors and discussing the inspiration for the film. In one scene he instructs Myriem Roussel to try to mimic Michelangelo's version of Mary, and then tells her to try to be more like Giulietta Masina in La strada, as he feels Mary has a bit of the clown in her. As he does this, the camera lingers lovingly on Roussel, alternately dissolving between her face, Michelangelo's painting, and images of Masina. When you get to the end, however, Godard makes a direct appeal for money. This was not a promotional piece to sell the movie to the audience, but a pre-production package for investors! 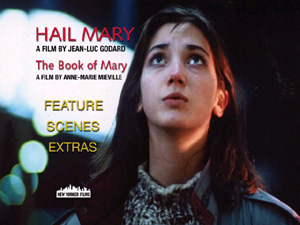 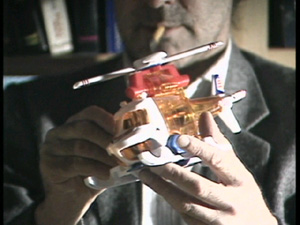 FINAL THOUGHTS:
Recommended. Hail Mary is a pretty good mid-period Godard. Though not up there with his best work from the 1960s, it still has a sharp, provocative message and bears his signature style. It's not for everyone, but if you like challenging films that play with your perceptions about religion, philosophy, and science--and even our own humanity--then Hail Mary is worth taking some time with. With the addition of Miéville's The Book of Marry and its powerhouse turn by Rebecca Hampton, the DVD becomes even more enticing.