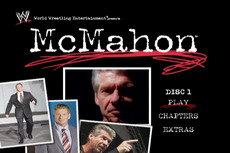 For better or worse, the McMahon name is synonymous with wrestling. After buying the WWWF from his father, Vincent Sr, Vince dropped the first "W" and turned it into a multi-million dollar industry. Besides his savvy business sense and a wicked stubborn streak, his acquisition of Terry Bollea (aka Hulk Hogan) helped the WWF skyrocket during the mid-80's. Along the way, Vince does battle with Ted Turner, starts a football league and gets more involved in the business - by becoming part of the talent. Oh, he also has one of his wrestlers engage in a bit of necrophilia.

This two hour documentary traces his life story from his early days announcing, all the way to his recent attempts to start his own religion. There are appearances from Shawn Michaels, Trish Stratus, Kurt Angle, Big Show, as well as Linda, Shane and Stephanie McMahon. The disc is broken down into the following twenty-nine chapters:

In addition to the documentary, these extras round the first disc: 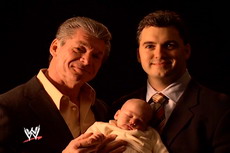 Video: Like most WWE DVD documentary presentations, this one sported a mostly sharp, colorful picture with deep blacks and a vibrant color palette. There were some slight compression issues due to the pyro and graphics used during the matches, but that's to be expected. It's presented in the WWE's standard full frame 1.33:1 ratio.

Conclusion: Vincent Kennedy McMahon has led a charmed life. His father might've laid the foundation for the business, but Vince blew it up to heights that no one expected. The documentary does an adequate job of taking us through McMahon's life and times, but I was disappointed there wasn't more discussion about Vince's early days before and shortly after his father made him announce. In fact, it wouldn't have bothered me if they put all the extras on the second disc, and expanded the documentary an hour or so. Love him or hate him, you can't deny the mark he's made on professional wrestling (later "sports entertainment") and fans of his product will definitely want to own this collection. Other than the glossing over of his early days, i'll give this one a Highly Recommended for WWE fans.