Throughout the course of the history of the World Wrestling Entertainment business, fans have been treated to a host of legends. Names like Hulk Hogan, Bret Hart, Steve Austin, Shawn Michaels, Paul Orndorff, Sgt. Slaughter, Bobby Heenan, and Gorilla Monsoon come to mind. A name that many may not think of immediately is 'Hot Rod' Roddy Piper. In this 3-Disc DVD Set, World Wrestling Entertainment covers the extensive career of 'Hot Rod' whose war with Hulk Hogan, Mr. T, Bret Hart, and a few others are highlighted. The DVD includes a fabulous documentary on Piper, has segments from the famous Piper's Pit and features 17 matches that chronicle this man's career. 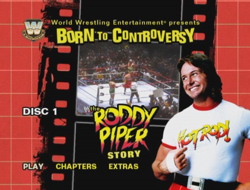 Roddy comments on how he grew up, where he was born on 4/17/54. We learn how many times he moved as a child before settling with his family. The subject of the legendary bagpipes at age six is also dealt with.

Roddy's first wrestling match in Winnipeg is commented on. His father spoke to him giving him this kind of scary ultimatum ('robbing a 7/11') convincing him to get into wrestling at age 15. He also speaks on how the announcer gave him his name of Piper (due to the bagpipe band that played him out).

Ric Flair and Jim Ross speak on how big Piper got in Portland Oregon Wrestling. His popularity grew tremendously as fans and wrestlers alike grew attached to his intense wrestling and interview style.

Piper comments on how working Ric Flair, to this day, was one of the best moments of his entire life. These two met in 1977 and have formed a lasting pact inside and outside of the ring. This was the time when Piper, in his view, really improved his wrestling style and skill. If anyone has watched WWE recently, we have gotten to see these two get back together.

Jim Ross speaks on the graphic, intense match between Valentine and Piper at Starrcade 1983. This match, in fact, was so controversial that the owner at that time, Jim Crockett, didn't want to sanction the match. After numerous letters from fans, Crockett decided to sanction it and, well, the rest is history.

Vince McMahon Sr. saw how powerful Piper was becoming. Crockett sat down with Piper telling him that McMahon wanted him after Crockett was done with him. Vince wanted to bring in Piper as a manager to get other stars over (like Orndorff). When fans wanted to see Piper in the ring, Vince gave them what they wanted.

Piper speaks on how at a bar in St. Louis, the idea for Piper's Pit came up from Vince McMahon Jr.

Jim Ross speaks on how important the relationship Piper had with 'Cowboy' Bob Orton was. Son Randy Orton also speaks here about their relationship was not just inside the ring, but also outside as Piper went to his house a lot. In fact, this was a moment when Randy thought of getting into wrestling.

The moment where Piper decided to become that huge rebel attacking Cindy Laufer and a few others. As Piper comments at that point, to wrestling fans, Saddam Hussein had nothing on Piper. 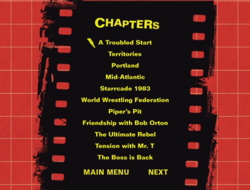 A huge rival, on and off the camera, with Mr.T is discussed. This was probably one of the biggest profiled feuds the WWE put on. Piper hated Mr.T because he disliked how Mr.T was an outside, never paid his dues and then became suddenly huge. Culminating with their boxing match at Wrestlemania II, Piper was glad the feud ended as this match, in his view, was horrendous.

The Boss is Back

Bobby Heenan comments how the fans loved what Piper said. Piper, as Heean tells us, said things to other superstars that people would only dream of saying. This segment also leads into Piper match with Adrian Adonis after Piper destroyed Adonis' 'Flower Shop' set.

Piper breaking out into the Hollywood scene, similar to Hogan, is detailed. His first film, John Carpenter's They Live, is spoken about by Piper and Director John Carpenter who thought that Piper had a quality in the ring and outside. Piper's role had a lot of physical action and spark according to Carpenter. The character Carpenter made for Piper was essentially a movie version of Piper's real life.

Bruce Prichard tells us on intelligent Piper was able to go away for a bit and then come back more popular than ever. His portion with Morton Downey and Brother Love is dealt with including the infamous fire extinguisher moment.

Jerry Lawler speaks on the moment in 90-91 where Piper became a Color Commentator with Vince McMahon.

The idea of Piper becoming a champion was never really thought of. As Jim Ross tells us, Piper's style and character didn't need a title to make money or be famous. Even though he never won the World Title, Piper regrets not telling anyone he wanted a chance. The IC title was important for Piper and for the fans as it signaled the time when fans felt they were being given what they wanted to see.

The subject of 250+ days a year is detailed here. Piper, who had a big family, speaks on how difficult this was for him. He frequently went back to his home in Oregon and took breaks getting his thoughts back together in one cohesive piece. His family comments on how proud they are of him.

Another Return to World Wrestling Federation

Piper's sudden return at Wrestlemania X as the special ref for the Yokozuna/Bret Hart Title Match is spoken of here. His feuds with Jerry Lawler and Goldust are also shown here capitalizing on a match Piper and Lawler at a King of the Ring. A horrible match for both involved.

As Piper puts it, WCW was, simply, a chance to make more money. Hogan viewed the acquisition of Piper as a key step for WCW becoming more popular than the WWE at this time. His new feud with Hogan culminating with a match at Starrcade 1996 is also spoken about.

A hugely controversial interview Piper gave on HBO is dealt with. The interview was given at a time when many young wrestlers, like Owen Hart, were dying. Jim Ross tells us that, at that time, Piper was full of self-pity and simply didn't care about his life. Piper mentions that the wrestlers were beaten down from a mental point to where they didn't care about their profession. His re-appearance in 2003 at Wrestlemania XIX is also shown.

This was a huge moment for Piper. Being honored in the Hall of Fame, for Piper, was gigantic and showed that Vince, despite some tumultuous moments, cared (this is even more evident in the recent induction of Bret Hart). I would have liked to see his entire speech here though.

This re-cap shows how influential Piper was.

In addition to the actual documentary, these extra's and matches round out the first of three discs

Presented in the typical 1:33:1 Fullscreen Aspect Ratio, Born to Controversy – the Roddy Piper Story showed grain and age during a majority of the matches. The documentary, however, was great as it showed vibrant colors, good enough detail and little to no grain. Same goes with the more recent Piper's Pit extra's. A fine enough transfer by WWE.

The provided Dolby Digital 5.1 Audio Track sounds good enough for the material. We never get a real use of surrounds, except in some of the newer matches where we can detect the jeering and cheering of some fans. The documentary's volume level was encoded at a fine enough rate that volume is never an issue. The older matches do require the volume to be turned up a bit, but that isn't too annoying. Not as good as the video, but still gets the job done.

Born to Controversy – the Roddy Piper Story contains an excellent, informative, and enjoyable documentary on the man that is Roddy Piper. The provided matches were interesting enough, but I wished there were more of his WCW stint (what can I say, I was a big fan of WCW). The including Piper's Pit were a great treat as Piper's Pit, as Piper and many other superstars tell us, has essentially shaped all over interview type shows including 'The Cutting Edge' and recent other segments. With an excellent documentary, fun enough matches, and some great features, this package comes highly recommended as it gives a great look into the life of the father, the wrestler, and the icon 'Hot Rod' Roddy Piper.