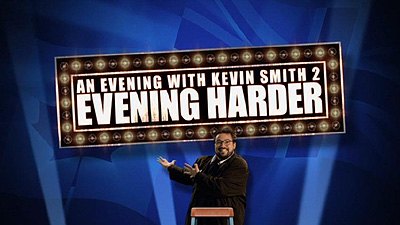 
The Story So Far...
Kevin Smith is a filmmaker, a merchandising whore and fine writer of comic books, along with several other jobs and hobbies. But his greatest skill probably is his storytelling. So it makes sense that his question and answer appearances tend to be a hot ticket. A camera crew follows him at times, and the "An Evening with Kevin Smith" DVD set offered highlights of several shows, delivering one of the most hilarious "stand-ups" seen in recent years. DVDTalk has reviews of the set by Aaron Beierle and Adam Tyner.

The Show
Evening Harder, though a cute name, doesn't quite capture the theme of this set, which sees Smith take his act beyond U.S borders. International Incident? It's a Smitty World? Lunchbox on the Loose? No matter the name, Smith visits Toronto, Canada and London, England, bringing the funny to people who speak his language, but sound a bit different.

Smith's description of Canada fits my view of the country pretty well, as I am a major Canadaphile, and have embraced that beautiful hockey-loving country wholeheartedly. There's little about Canada that I don't like, save for the Maple Leafs and Tim Horton's, which is where Smith and I differ in opinion (the donuts, not the hockey team.) 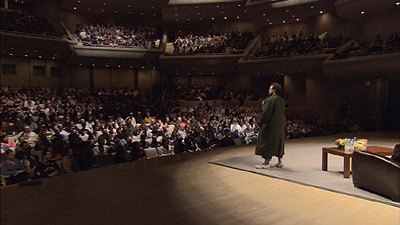 On disc one, Smith mixes little riffs on Canada and its uniquely good-natured people and culture, with answers to questions from the audience about himself, his movies, pop culture and his celebrity friends. Smith's films cut across a lot of demographics, though mostly male, and his Q&A audiences do also, resulting in a pretty decent range of topics, from the standard (writer's block) to the interesting (his daughter's effect on his life) to the ridiculous ("How much are you worth?".) Smith grabs the best opportunities to spin a yarn or two, while turning the lesser queries humorous by poking fun at the questioning party.

There are some really good stories told here, including his experience with "Dora the Explorer," which had me rolling, though it may just be because I'm the father of a little girl myself, and I can't stand that show. Having a kid's seems to have reloaded Smith's story arsenal a bit, helping to stretch his core themes past Ben Affleck, Jay Mewes and homosexuality, though there's plenty of all three (just not in the same story.) Among the other memorable moments here are the return of the Prince discussion from the first set, Smith's re-do of The Passion of the Christ and the delivery of some Timbits by a fan who didn't know when to make an exit.

Heading across the pond to England gave Smith much more of a culture clash to play with, allowing him to mess around with pronunciations, accents and word meanings. With his sainted mother watching from a nearby balcony, he learns about "fanny fun," to the amusement of the audience. The communication gap can slow things down slightly, as the audience members need to repeat themselves frequently, but Smith makes it work anyway.

The "plot" remains the same, though the stories change, as Smith talks about Bryan Singer's "X-Men" gay parable, the value of a fat lover, his take on action films, Donnie Darko and the difference between "The Trilogy" and the trilogy (which seems to have ended up inspiring a scene in Clerks 2.) The audience features some truly interesting people for Smith to play off of, including a big man Smith attempts to convince to go gay, a fellow who wants to know Smith's sausage preference, a very drunk lady and a guy you'd previously only find on "Little Britain." Though this Q&A freakshow is great, it's two extended stories that steal the show, including a look at Smith's daughter's very unusual childhood and Smith's tale of his wife's Playboy shoot. Both are fascinating and hilarious, and will make you want to go back and listen again. The only real disappointment about the British disc is the home stretch, during which some dullards wreck things by asking stupid questions that Smith can't do anything with, which forces the show to peter out instead of building to a climax. 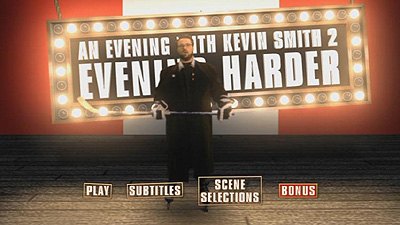 As he did on the first collection, Mewes pops in for a bit on both discs, as well as Harley Quinn Smith and Jen Smith, and the lacksidasical pal of Smith's hangs out on a couch on-stage, answers a few questions, and basically acts as a sidekick to Not-So-Silent Bob. Thankfully, he's not a major part of the show, helping provide Smith with a bit of a mid-performance break, as you want to hear as much as you can from the writer and director.

The DVDs
Each of the countries Smith conquered gets a disc to itself, both of which are packed in a three-panel, two-tray digipak, which arrives inside a foil-printed slipcase. The discs feature amusing anamorphic widescreen main menus that show Smith wasting time in a variety of ways. The menus feature options to watch the show, select scenes, adjust languages and check out special features. There are no audio options, though subtitles are available in English and French, along with English closed captioning.

The Quality
The shows are presented with anamorphic widescreen transfers that are pretty nice, if slightly soft in spots. Considering this is essentially a documentary film and the lighting in the rooms is spotty, the clarity of the image and the level of detail is rather high, though angles that put Smith against darker backgrounds are problematic due to some noticeable grain and haloing along edges. The colors are vibrant for the most part, and there's no noticeable dirt, damage or digital artifacts.

After presenting the show in a two-channel track last time, this time, the producers mixed up a Dolby Digital 5.0 track that puts the viewer in the midst of the audience, whom you can hear in the sides and rear. Since the set is pretty much just Smith standing on a stage talking, it doesn't boast the most dynamic soundtrack, but it sounds very clear, which is all you need.

The Extras
Disc One features one extra, a limo trip with Smith as he searches for information about Canadian cuisine by interviewing Canadian in what looks like a comic book shop. It's an amusing little tidbit.

Disc Two has a six and a half minute clip of Mewes trying to hit on British chicks, with some awful pick-up lines, as Smith tags along. It's certainly cute, as is most of Mewes' material. There's also a bunch of trailers included.

On the Hunt
There are at least three easter eggs on these DVDs. Check out the Easter Egg section of DVDTalk for more details. 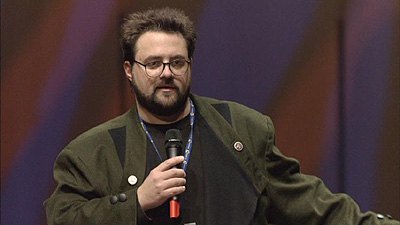 The Bottom Line
Though the stories aren't as hilarious as those heard on the first collection, and there are some serious momentum killers in the audience, this set remains an easy way to find plenty of laughs, as Smith remains a raconteur par excellence. He's one of the few people I could listen to speak for four hours, only to jump back and listen to him again, thanks to a very folksy manner and a genuine sense of humor. The DVDs look and sound very good, though the extras are slim compared to most Smith productions. Fans of the Jersey Boy will absolutely want to check this one out, and likely own it, as there are quite a few spins one could get out of it.