Ernst Lubitsch came to Hollywood in 1922. He was one of the first German directors to be recruited by Hollywood, and what's even more impressive is that he was able to work within the studio system and create successful and entertaining films. He was nominated for three Academy Awards, three of his actors were nominated for films he directed (Lewis Stone, Maurice Chevalier and Greta Garbo), and he was presented with an honorary award by the Academy in 1947 for "his distinguished contributions to the art of the motion picture." Before coming to America however, Lubitsh made some very good films in Germany. Kino has released four of these on DVD under the banner "Lubitsch in Berlin." Sumurun is included in this set of releases, an important movie in Lubtisch's career. It was this film that impressed Pickford so much when she saw it that she hired Lubitsch and brought him to America.

A slightly confusing but entertaining story, Sumurun is a love triangle with six sides. A "love hexagon" if you will. The Grand Sheikh (Paul Wegener from Golem) is a rich and powerful ruler, and naturally has a very large harem. When he catches his favorite wife, Sumurun (Jenny Hasselquist), flirting through a window with the man she really loves, the merchant Nur-Al Din (Harry Liedtke), he flies into a rage and is going to kill her. Fortunately he is interrupted by the announcement that a traveling circus has arrived. The star dancer is Yannaia (Pola Negri), and the King is smitten with her. Another member of the troupe, the hunchbacked Yeggar (Ernst Lubitsch in his last film performance), is also in love with Yannaia, and when the Sheik's son sees her, his jeans start feeling a little tight too.

The Sheik hasn't forgotten about Sumurun's treachery, but one of the harem women convinces the prince to claim that it was he with whom Sumurun was flirting. Dad thinks that's okay, just a chip off the old block, and pardons his wife. He also really likes Yannaia, and buys her for his harem. When Yeggar finds out that his love is being sold to the Sheikh, he takes a potion that knocks him out but makes it look as if he died. Then Yannaia thinks he's dead, and his body gets stolen and...well, things just escalate from there.

Though this movie has several different plots all vying for screen time, Lubitsch does a great job at balancing them all and not making it all too confusing. In the hands of a lesser director this film would be a mess. While it isn't as amusing as his later works, you can see his style emerging in this movie. One title card reads "The eunuchs fiercely guard the mighty sheikh's women" and is followed by the image of ten men sitting in front of the harem building trying to stay awake. There are humorous bits like that sprinkled through the entire film and it helps lighten the drama. It's actually quite a funny film. 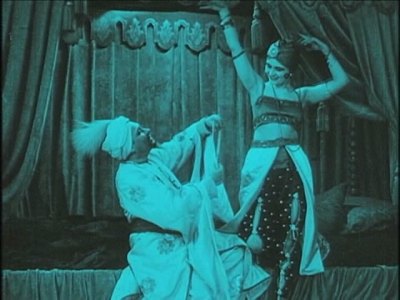 The end of the movie is rather odd though, especially for a light drama. It's almost as if the writer (this was based on a stage play) just wanted to end it all. With most of the main characters ending up either heart-broken or dead, the final reel puts a damper on things.

The acting was good, with Lubitsch himself turning in a nice comic performance. The person who stole the film however was Pola Negri. Negri wasn't a great beauty but she had a lot of screen presence and just exuded sexuality in this film. It was easy to believe that all of these men would fall for her, she was down right sexy. Her dances were tantalizing and she had a playful nature about her. Your eyes naturally moved to Pola whenever she was on the screen. It's easy to see how she too received an invitation to Hollywood.

The piano score by Javier Perez de Azpeitia was scene specific and generally fit the mood of the film. It didn't excite me too much, but it was definitely adequate. Being a recent recording there were no audio defects worth noting.

This movie has been restored by the F.W. Murnau Stiftung and they've done a fine job. The image is very clear and the level of detail is fine. The contrast is generally good. There is some blooming of the highlights and black objects have very little texture and details disappear in shadows, but this is not major.

The only extras on this disc are a very short stills gallery and a text filmography of the director.

This was a fun and enjoyable film, even if the end didn't work as well as it could have. You can see the beginning of the Lubitsch touch in the way this movie was filmed too. A gentle comedy that earned it's director and star tickets to Hollywood. Recommended.