When Ernst Lubitsch was still making films in Germany, he used to alternate between light comedies and historic epics. After the Arabian Nights fantasy Sumurun, Lubitsch created his most visually impressive German spectacle, Anna Boleyn (released in the US as Deception.) Based on Henry VIII's affair and marriage to his second wife, this film features large sets, lavish costumes and gorgeous exterior shots. It was one of Ufa's most grandiose projects with a budget of 8.5 million German marks and over 5000 extras. Given all of this, it's a bit surprising that the film only partially succeeds. The film drags in several places and the two hour running length seems much longer than that. 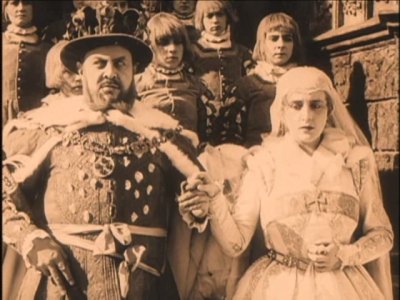 Anne Boleyn, niece of the Grand Duke of Norfolk comes to London to act as a lady-in-waiting for King Henry VIII's wife, Queen Catherine of Aragon. When Anne's dress gets caught in a door as she's leaving the Queen's chamber, she comes to the notice of the King. He's instantly infatuated with the young maid, and starts to pursue her.

Anne resists at first, but after Henry divorces Catherine and offers her the crown, she relents and marries the monarch. Things go well for a short time, but Henry isn't a one woman man and his eye soon starts to wander. It gets worse when Anne has the audacity to bear him a daughter. At this Henry wants a divorce; as his interest has since turned to the baby's nurse, Jane Seymore. As most people probably know, she refuses to give him one and that has disastrous consequences for the young queen. 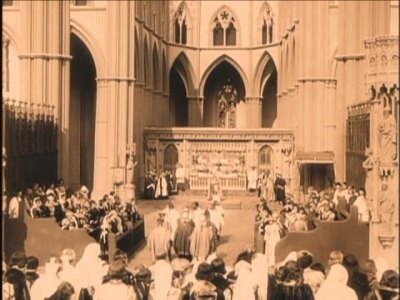 A lot of work and effort went in to making this film. To create the grand sets two architects were employed designed and supervised the construction copies of the Tower of London, Windsor Castle and Westminster Abbey. These large sets gave the film an authentic feeling, and helped create the film's atmosphere. The costume designs were also excellent and added to the feel of the film.

Even with all of the effort that went into this film, it's lacking a bit. Not a bad film, but one that doesn't really excite the viewer. There are a few too many dry sections were the narrative drags and the pacing is uneven. This is an interesting story and the contrast between the innocent Anne Boleyn and the overindulgent Henry VIII is very well done, but ultimately this movie comes across as nice to look at but otherwise unexceptional.

One aspect of the movie that is exceptional is Emil Jannings. He steals the movie as King Henry VIII, giving a strong performance, as he often did. His Henry was filled with gusto as well as a being a sly and calculating individual. The movie was most interesting when he was on screen. Henny Porten was adequate in the title role, but she had a tendency to overact just a bit. This wasn't horrible, but she doesn't have the screen presence that Jannings has.

This was an interesting choice of a film for Lubitsch to direct. One can't help but think that the government officials at the state owned UFA studios were overjoyed to hear of this project. Having one of their strongest directors making a film about an evil English monarch murdering his young, attractive wife must have earned Lubitsch some brownie points so soon after the conclusion of WWI.

The piano score by Javier Perez de Azpeitia was scene specific and generally fit the mood of the film. It didn't excite me too much, but it was definitely adequate. Being a recent recording there were no audio defects worth noting.

This movie has been restored by the F.W. Murnau Foundation and they've done a fine job. The sepia toned image is very clear and the level of detail is fine. The contrast is generally good. There is some blooming of the highlights and black objects have very little texture and details disappear in shadows, but this is not major. The 35mm print that was used was not totally free from dirt and scratches but these were minor.

Like the other DVDs in this series, there weren't too many extras. This disc includes a gallery of production stills and a Lubitsh filmography, but that's it.

This was Lubitsch's second film to be released in the US (the first was Madame Dubarry) and it was a success here. Over 85 years after it was made this film is a little dated. It drags a bit in parts and though Emil Jannings does a wonderful job, I was never totally absorbed by the film. I wasn't bored by it either. The settings, costumes and outdoor scenery make this an enjoyable film even in the slower bits. Recommended.