As part of their Lubitsch in Germany collection, Kino has released a pair of his early four reel comedies on a single disc. The Oyster Princess and I Don't Want to Be a Man are both amusing comedies that star Ossi Oswalda, dubbed "the German Mary Pickford." She and Lubitsch make quite a team, as these two films demonstrate. 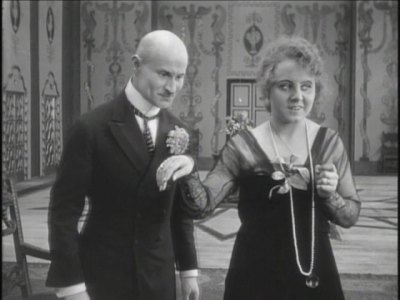 In this broad farce, the spoiled, petulant daughter of a fabulously wealthy oyster baron, Ossi (Ossi Oswalda), can't be controlled. During one of her fits, the father promises to find her a husband...and no less than a prince. He contacts a matchmaker who has the perfect candidate; a prince heavily in debt. When the prince sends his aide to check out this potential mate, Ossi assumes that he is the prince and forces him to marry her right away.

This comedy is the direct precursor to the screwball comedies of the 30's. It has mistaken identities, absurd situations, and general confusion in addition to some very funny scenes. Lubitsch didn't go for subtle jokes in this film, they are all over the top, and it works very well. Near the end of the film for example, Ossi is attending a meeting of "The Multi-millionaires' Daughters' Association Against Dipsomania" when a handsome drunk stumbles in. The girls all want to 'cure' this poor man by themselves. Ossi suggests that a boxing match should settle the matter, and the women all retire to the basement to duke it out.

There is a lot of absurd humor in this film, and it works well. From the foxtrot wedding dance to the wedding ceremony itself, there are a lot of amusing scenes in this film. It is a comic delight. 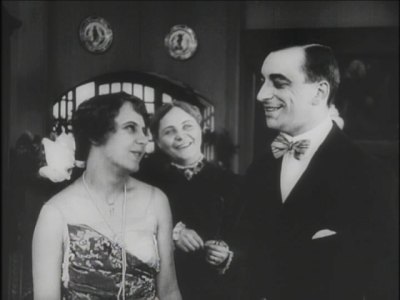 The young lady Ossi (Ossi Oswalda again) has it tough. She wants to play poker, smoke, and drink like the guys do, but her guardian won't let her. She thinks her chance for freedom arrives when her guardian departs, he has to go to America for an extended time on business, but that's not to be the case. Another guardian is appointed, and this one is even more strict. Being sent to bed early one evening, Ossi laments that she should have been born a boy, and this gives her an idea. If she dresses like a man, surely she'll be able to have all of the freedom that men enjoy. She embarks on this course which results in predictable comic mayhem.

This was the film Lubitsch directed before making his first feature length film, and it shows that he was ready for the leap. While it isn't as humorous as The Oyster Princess, the movie has a lot of charm and wit.

Of course these two films both contain some of the characteristics and traits that Lubitsch would refine and use successfully in his American films; headstrong women and mistaken identity. Ossi Oswalda does a great job in both films. She has a lot of screen presence and plays a shrewish, spoiled girl with gusto and spirit. She really makes these two movies with her energetic personality. She (along with Pola Negri) is the cinematic fore-bearer to such actresses as Claudette Colbert and Carole Lombard.

The scores by Aljoscha Zimmermann (Oyster Princess) and Neil Brand (I Don't Want to Be a Man) were scene specific and generally fit the mood of the film. I thought Brand's music was fine, but Zimmerman's music was too over the top for my tastes. Even the smallest jokes were accented with comic music and that grew tiring after a while. Being a recent recording there were no audio defects worth noting. The intertitles are in English.

This movie has been restored by the F.W. Murnau Foundation and they've done a wonderful job. The image is very clear and the level of detail is fine. The contrast is excellent. The 35mm print that was used was not totally free from dirt and scratches but these were minor. There was some trouble with cross colorization in The Oyster Princess, especially when Quaker is wearing a pinstriped suit.

Like the other DVDs in this series, there weren't too many extras. This disc includes a gallery of production stills and a Lubitsh filmography, but that's it.

These films are a lot of fun. They are funny and entertaining, and they also show some of the characteristics that Lubitsch would later develop to create the "Lubitsch Touch". Ossi Oswalda was a strong actress and it is too bad that more of her films aren't available on home video. This disc gets a strong recommendation.