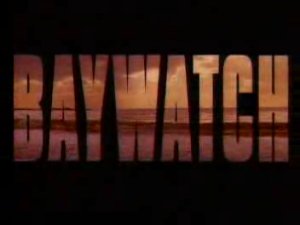 In the late 1980s, a new television aired on NBC called Baywatch. The series did not do very well and NBC cancelled it at the end of its first year. The series went into syndication and individual funding sources helped keep it alive. In 1991, Baywatch started its second season. Afterwards, Baywatch grew in popularity and ran until 2001--its eleventh season with two hundred and forty-two episodes. The series has been herald as one of the most popular (in terms of audience numbers, not necessarily quality) television series worldwide.

Baywatch, in its first nine seasons, takes place on the sunny beaches of California. The final two seasons followed Hasselhoff's character relocating to the beaches of Hawaii. Baywatch's stories deal with beautiful life guards who save drowning swimmers to thwarting criminal masterminds. Another major aspect that Baywatch is well-known for is its beautiful female cast that runs on the beach in slow motion while certain parts of their bodies bounce.

This review covers the "second season". While it is dubbed as the second season, it is not really the second season of the show. The episodes included in this set come from the series second season in syndication. First Look Home Entertainment, the group putting out the DVDs, started the season numbering from the series' first season in syndication. The actual first season that NBC aired is being included in the syndicated season releases. For instance, this release includes the episodes "In Deep" and "Heat Wave". It is also important to note that due to licensing issues, the two-part season premiere episode "River Of No Return" is not included in this set.

From Baywatch's first season in syndication to the second, almost the entire cast was changed. Season one's regular characters Eddie, Shauni, and Harvey are no longer on the show. Season two sees several replacement characters. Stephanie Holden (Alexandra Paul) comes on as the new supervising lieutenant. Stephanie takes charge of headquarters and allows Mitch to go back on the beach. She has a history with Mitch, which produces some tension between them. 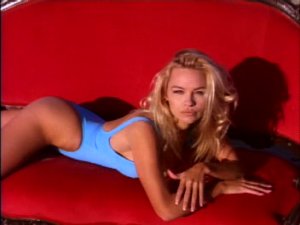 Another new character this season is C.J. Parker (Pamela Denise Anderson). She is an experienced lifeguard and helps out the new faces as necessary. Both Matt Brody (David Charvet) and Summer Quinn (Nicole Eggert) join the Baywatch team as rookie lifeguards. They are both getting accustomed to the taxing lifestyle as lifeguards. Jimmy Slade (Kelly Slater) is surfer who repeatedly finds himself in the Baywatch crew's lives. Slater, who plays Jimmy, is a pro-surfer in real life.

In general, the content this season provides is not better than the past season. The stories still include overly dramatic, poorly written storylines with decent acting performances. For instance, the first episode in this collection is "Tequila". The meat of the story is about a group of surfers who terrorize anyone and everyone who try to "surf" on their waves. It is a ridiculous and overly dramatic story that is neither entertaining nor interesting. But while episodes like "Tequila" are made up entirely of absurd storylines, there are some interesting aspects. What I enjoyed about "Tequila" was Mitch getting accustomed to the latest addition, his former love Stephanie.

The remainder of the season episodes continues to offer somewhat fluffy material (e.g., "Masquerade", Baywatch goes undercover to catch pirates, and "Strangers Among Us", a smuggler hides valuables in Jimmy's surfboard). There were a few I enjoyed, but those were the episodes that primary focused on character development. I thought that Mitch and Stephanie had good chemistry together, and I also enjoyed seeing the Baywatch rookies get accustomed to their new jobs. There are also some dramatic stories of interest, like the love triangle with Summer, Courtney (guest star Elizabeth Berkley), and Jimmy.

Overall, I enjoyed this set of episodes more than the past season because of the characters. The content itself was not necessarily better. Despite, I still think that Baywatch is a hit or miss show. You will either love it or hate it. There really is not anything too special about the series to warrant your attention, unless of course you are attempting to subdue nostalgia. 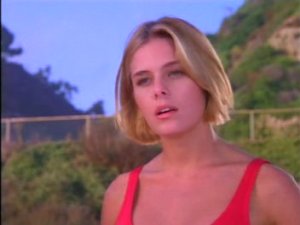 1. River Of No Return Part 1: A relative's mysterious drowning death finds Mitch, Hobie, Eddie, and Shauni traveling to California's gold country for a whitewater rafting adventure they'll never forget.
2. River Of No Return Part 2: A whitewater rafting vacation turns deadly when Mitch, Hobie, Eddie, Shauni and CJ are pursued by murderous miners in California's gold country.
3. Tequila Bay: Jimmy Slade and Matt Brody tangle with a violent surf gang, while Mitch's life is thrown into turmoil when former lover Stephanie Holden assumes command of Baywatch headquarters.
4. Rookie Of The Year: Summer and Matt face grueling personal and physical challenges in Rookie School, the "boot camp" of lifeguarding, while CJ and Stephanie are forced to share an apartment.
5. Pier Pressure: Hobie and Summer find themselves torn between doing the right thing and giving in to dangerous social pressures.
6. Malibu Beach High: Malibu Beach High students square off against the administrations' plans to sell sacred Chumash Indian lands, while Garner quits the beach for an office job.
7. Point Doom: Matt's tempestuous affair with a gorgeous motorcycle racer takes him to the brink, while Mitch and Stephanie go head-to-head in a spirited battle of the sexes.
8. Princess Of Tides: A thrilling muscle boat competition is the backdrop for a whirlwind romance between Mitch and a beautiful woman he doesn't know is a princess who is the target of an assassination plot.
9. Masquerade: When Mitch and Stephanie board a yacht disguised as wealthy southern honeymooners, in order to capture a group of modern-day pirates, they find themselves attracted to each other's assumed character.
10. Lifeguards Can't Jump: Mitch and Garner go undercover as a two-on-two street basketball team to solve a young athlete's murder, while CJ becomes involved with an amorous, honeymooning Midwestern tourist.
11. Dead Of Summer: A rock concert and political rally are the backdrop for a chilling assassination plot that finds CJ unconscious on a dynamite-laden Scarab heading for a crowded pier. 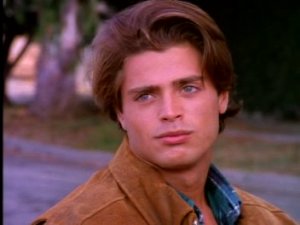 12. A Matter Of Life And Death: A dispute between Mitch's lifeguard career and his father's desire to have him take over the family business becomes intensified by devastating news about the elder Buchannon. Meanwhile, Summer struggles with a childhood trauma that threatens her future as a lifeguard.
13. Island Of Romance: CJ and Stephanie travel to Catalina Island for a "girls-only" weekend getaway, only to find love with two handsome men and danger while underwater scuba diving. Mitch and Hobie hire a live-in housekeeper, whose efficiency and beauty turn their lives upside down.
14. Strangers Among Us: Mitch and Stephanie cope with an odd assembly of UFO enthusiasts camping on the beach in anticipation of an extra-terrestrial visit. Slade and Summer become the unknowing targets of ruthless jewel thieves.
15. Vacation Part 1: The Baywatch lifeguards set sail on a romantic cruise, only to encounter a dangerous fugitive, who forces Mitch and Stephanie overboard into the stormy Pacific Ocean.
16. Vacation Part 2: While on vacation cruise, the Baywatch lifeguards encounter high-seas hijackers, leaving Mitch and Stephanie stranded in the stormy Pacific, and Summer, Matt, CJ and Guido faced with outwitting ruthless killers who have overtaken the ship.
17. The Tower: An escaped psychopath takes Summer and Stephanie hostage in a lifeguard tower, setting the stage for a thrilling subterranean rescue attempt by Mitch and Matt.
18. Stakeout At Surfrider Beach: Mitch finds himself falling for an Italian actress who is being stalked by ruthless, follow home robbers. Meanwhile, CJ and Stephanie help Guido pretend to be a lifeguard in order to impress his visiting mother.
19. Shattered Part 1: Mitch is paralyzed when he risks his life to save three teenagers. Hobie, Stephanie, and Sophie, his physical therapist, rally to repair his shattered life.
20. Shattered Part 2: Paralyzed in a heroic rescue, Mitch undergoes a vigorous rehabilitation regimen. Meanwhile, Jason, a ten-year old paraplegic, is pursued by a hit man trying to keep him from testifying against gangsters.
21. Kicks: Mitch coaches Matt in an amateur kickboxing tournament, but the competition turns deadly when an enemy from Mitch's past gets him into the ring. Meanwhile, CJ is seduced by a fashion photographer.
22. Fatal Exchange: Mitch contends with an unorthodox, risk-taking, Australian lifeguard, and rekindles his love affair with beautiful journalist, Kay Morgan. 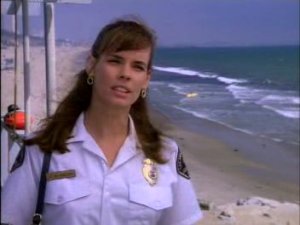 
Video:
Video is given in its original television aspect ratio of 1.33:1 full frame color. The picture quality is on par with what you could expect from broadcast television. The picture is grainy and blocky. The transfer is dirty and the occasional glitch pops up. Visually, it is not the prettiest picture, but it is still viewable.

Audio:
Audio is provided in two formats, 5.1 Dolby digital surround and 2.0 stereo. Both formats are in the English language. The 5.1 track is overkill and makes very little use of the full surround sound capability. The audio sounds pretty clean with dialogue easy to hear throughout the season episodes.

The release has subtitle support in the English and Spanish languages.

Extras:
In Deep is the first bonus episode. It is the second episode from the NBC season. Here the episode description: Playing hooky from summer school, Lieutenant Mitch Buchannon's son Hobie gets dangerously involved with reckless power skiers while other members of the L.A. County lifeguard team deal with personal secrets.

Heat Wave is the next bonus episode. It is the third episode from the NBC season. Here the episode description: On a hot summer day with record-breaking temperatures, hordes of people migrate to the Los Angeles County beaches. As the lifeguards work their full potential, an ex-lifeguard mysteriously appears bringing a son and quite a bit of trouble.

Baywatch Through The Years is a photo gallery of the cast in action and posing. There are a total of thirty pictures.

How It All Began (13:17) is an interview featurette with the show's co-creators and executive producers Michael Berk, Doug Schwartz, and Greg Bonann. The interview begins with Berk, Schwartz, and Bonann talking about how they developed the series. They begin discussing their own histories and how they got into developing TV movies. Berk and Schwartz talk about their histories working together and Bonann talks about his crude TV concept that turned into Baywatch. They also talk about other aspects related to the series' beginning. The most interesting portion is the discussion about the cancellation and revival.

Clip of Girls on the Beach (2:00) is an Easter Egg (I made up the name!). It is accessed from disc 5's menu. While "How It All Began" is selected, press the right arrow on the DVD remote to highlight the female lifeguard shape. The clip is a montage of scenes with girls on the beach, lifeguards and civilians.

Final Thoughts:
Like my impressions about Baywatch: Season 1, I did not find this second season to be a great collection of episodes. The content from season one to season two is pretty much the same with over-the-top drama, somewhat decent acting, and limited storylines. However, I did notice that with this second season (and its almost entirely new cast) that I enjoyed the characters more. If anything, I think this season handles their development and relationships better. Regardless, I think this set is best reserved for the fans of the series looking for moments of nostalgia. However, I suggest renting before purchasing.

Note: In addition to this season not including all of its episodes, music has been replaced, most notably the opening theme song.