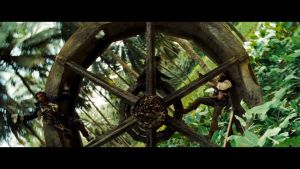 I'm going to keep the "movie review" section fairly short this time out, partially because I've already written a fairly lengthy review of Pirates of the Caribbean: Dead Man's Chest by this point -- but mainly because I'm starting to feel like an absolute pimp where this series is concerned. Long story short: I love both of 'em, from the cutesy comedy bits to the massive explosions of action; from Johnny Depp's deliriously amusing presence right down to the smallest character actor playing the grungiest little sidekick. 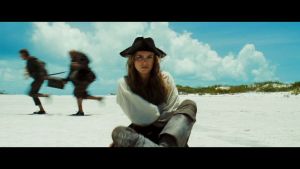 And while I'd be the first to admit that, nope, the sequel is not exactly as fresh or surprisingly captivating as the original (The Curse of the Black Pearl) was, there's little denying that Dead Man's Chest is a Popcorn Movie of the highest order. It's got fights, monsters, comedy, kissing, dogs, cannibals, undead fish-men, booby traps, escapes, chases, explosions and eye candy to spare, and here's the best part: There's a real sense of artistry and craftsmanship in the Pirates flicks that puts other "tentpole" franchises to shame. DMC (and its upcoming sequel) may go down in history as one of the most expensive movies ever made ... but every damn nickel is right up there on the screen, and if you're looking for what we call "bang for the buck," this movie delivers it in joyfully enthusiastic fashion. 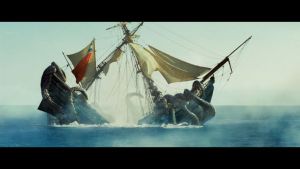 I could spend another 800 words lauding Depp and his co-stars (the oft- and unjustly-derided Orlando Bloom and Keira Knightley) or the memorably colorful supporting turns from the likes of Jack Davenport and Jonathan Pryce; the precedent-setting special effects that bring the eye-popping Kraken and the flawless Davey Jones to life; the wonderfully convoluted (yet entirely decipherable) plot threads that weave all over each other -- or the heart-punching finalé that's got half the planet holding their collective breath for next summer's At Worlds End -- but the internet is full of semi-breathless praise for this breakneck sequel, and lots of it has already come from yours truly. 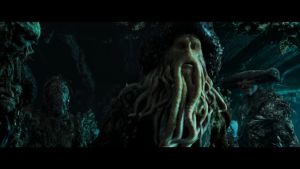 Just like its predecessor, Pirates 2 is everything you could ask for out of a big-budget piece of eyeball-candy. Fast-paced but satisfyingly filling, consistently funny and periodically thrilling, packed with characters both charismatic and terrifying, and absolutely insistent on giving you your money's worth, movie-wise, DMC is a flick that gets better each time I watch it. And while it's by no means a perfect piece of mega-pricey moviemaking, it stands as a sequel that might not top is predecessor, but has certainly earned a place right beside it. 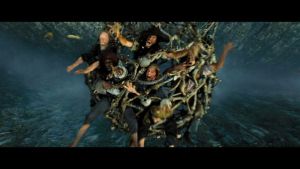 The plot? It's a massive three-headed treasure hunt in which a dozen characters (of varying degrees of decency) bounce through an endless array of exotic locales, precarious perches, and crazy creatures. But the beauty lies within the smaller details, which I'll leave you to discover on your own. Plus the movie's got, like, five huge action scenes that you'll want to watch over and over. And isn't that part of what makes DVD so damn cool?

Video: C'mon, think about it. It's one of the highest-grossing movies of all time and it's being released by a studio well-known for delivering exceedingly fantastic DVDs -- for their newer flicks, anyway. The anamorphic widescreen (2.35:1) display looks absolutely wonderful, from the dark and creepy shadows of the haunted galleons to the vibrant colors of "cannibal island" and the bleached-white beaches of ... wherever that crazy third-act sword-fest took place. Flick looks awesome; have a ball. 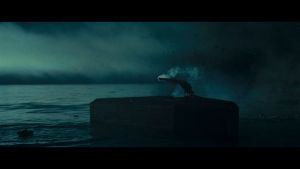 Audio: Dolby Digital 5.1 (English, Spanish or French, with optional subtitles in all three languages) -- Audio quality is also quite excellent, although I'm some of you were hoping for a 6.1 or DTS track. Hans Zimmer's score supports the action bits quite capably, the sound effects are slickly effective, and the dialogue comes through quite nicely.

Extras: Get comfy. (The 2-disc set comes in a nifty little (kinda) 3-D slipcase, and inside the package you'll find a foldout booklet that gives you a navigation map and some info on the extras.

Beginning on Disc 1 we find a feature-length audio commentary from screenwriters Ted Elliott and Terry Rossio. It's a perfectly cool chat-track, with the writers sharing a lot of information on the writing process, the difficulties of creating a follow-up to a movie so darn popular, and a few explanations as to the "simplicity" of the plot. The guys' conversations focus mainly on story structure and character motivations but hey, they're screenwriters! Odd that neither Gore Verbinski or Jerry Bruckheimer contributed any sort of commentary materials, but I suppose those will have to wait for the next release; those guys are still working on Pirates 3!

Bloopers of the Caribbean (3:50) is precisely what it sounds like: a well-edited collection of stumbles, bumbles, flubbed lines and giggling. Fun stuff. 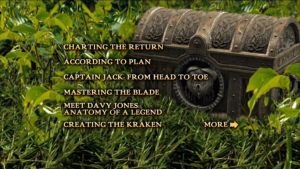 And you'll pardon the obvious joke, but Disc 2 is an absolute treasure chest of Pirates booty. We start off with Charting the Return (25:40), which focuses on the early work: the finishing of the screenplay, the scouting of (remote) locations, the action scene preparations, and a hundred other logistical headaches that nobody (outside the movie biz) ever thinks about.

According to Plan: The Harrowing and True Story of Dead Man's Chest runs 63 minutes and covers most the expected ground (big set pieces, special effects, etc.), but also pays close attention to even the smallest details, too -- like how you get 200 trucks and a thousand pieces of equipment onto an island as tiny as Dominica. Tons of cast and crew interviews complement the often-fascinating peeks at the location preparations and on-set activities.

Mastering the Blade comes with three chapters: Orlando Bloom (5:36), Keira Knightley (5:06), and Jack Davenport (5:16). The focus here is swordplay, of course, and a few other crazy action scenes, as seen and explained by the actors. 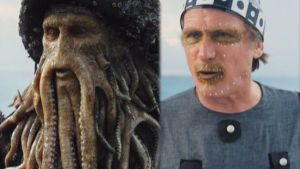 Meet Davy Jones: Anatomy of a Legend is a 13-minute featurette that gives away most of the special effects magic used to bring the wild-looking villain to cinematic life. The 10-minute Creating the Kraken does the same thing for that mythical mega-beast.

Tying the sequel into the well-admired Disneyland ride is Dead Men Tell New Tales: Re-Imagineering the Attraction, which runs 13 minutes and offers a brief history lesson before detailing the new "enhancements" that were inspired by the first Pirates movie and then incorporated into the attraction. Pretty cool.

Fly on the Set: The Bone Cage (3:47) takes a closer look at one of the flick's more outrageous action sequences. Jerry Bruckheimer: A Producer's Photo Diary (4:41) hs the producer chatting away about his cast and director as a series of (pretty excellent) snapshots float across the screen. And Pirates on Main Street (3:58) is a raucous trip down the Disneyland red carpet for the DMC premiere. 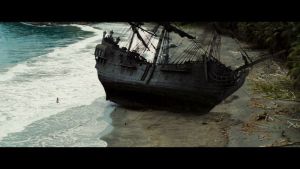 All of the aforementioned featurettes are of exceedingly high quality. In addition to insights, anecdotes, and war stories from dozens of the POTC2 cast, crew and team of technicians, it seems that the DVD crew had pretty much unlimited access to the set. And it's not all sunshine and love here, folks. Check out when director Gore Verbinski gets actively irritated at the slow writing process, and get a glimpse of the storm wreckage that we read about back when the sequel was still in production. Excellent supplemental material all around, whether you're a fan of the movie for its surface-level fun or you're more interested in the actual work that goes into making a movie of this massive size. 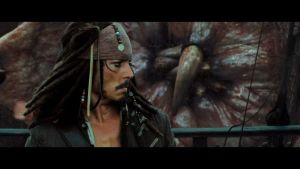 One of my favorite fun-time movies of the year, brought home with some very fine A/V specs and enough supplementary material to choke a Kraken, Pirates of the Caribbean: Dead Man's Chest might be considered mindless fluff by some movie fans, but I have no problem whatsoever with "mindless fluff" -- provided it's crafted with this much color, wit, energy, enthusiasm, and action. The action bits are the key, and DMC's got 'em in spades.