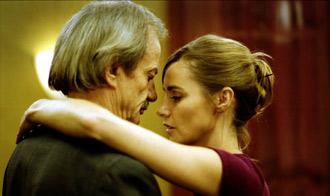 Tired from the boring routine of his profession fifty-ish old bailiff Jean-Claude Delsart (Patrick Chesnais) decides to enroll in a tango class. Just like the one he watches every day from the back window of his office. There he meets the forty-ish and soon-to-be married beautiful Francoise (Anne Consigny). She approaches Jean-Claude and asks if he would like to dance with her.

As time goes by it becomes obvious that Francoise not only likes to dance with Jean-Claude she also fancies talking to him. The two go out a few times, attend a play, even arrange to meet at Jean-Claude's place (Francoise conveniently forgets her dancing shoes in his car and asks if she could pick them up). Soon the two tango enthusiasts find each other under the spell of what they both thought has been long gone: that thing called love!

A beautifully told love story Stéphane Brizé's Je Ne Suis Pas La Pour Etre Aime a.k.a Not Here To Be Loved (2005) is a film that will warm the hearts of those craving a bit of old-fashioned romance. Carefully observed and with plenty of gorgeous music (the Argentinean tango mesmerizes) this is also a film that desperately attempts not to follow annoying clichés.

Not surprisingly the script of Je Ne Suis Pas La Pour Etre Aime unites the two main protagonists while they both seem to be fighting life's daily disappointments – Jean-Claude is increasingly frustrated with his job and his father who resides in a retirement home while Francois is visibly disturbed with her soon-to-be husband whose upcoming book has come to a halt. At first they both attempt to hide what is really taking place in their private lives but as the story progresses it becomes clear that neither Jean-Claude nor Francoise know how much longer they can keep going.

It takes a while before the two begin to see how grotesque their lives have become. When they finally gather the courage to make a move disappointment is everywhere. Is being fifty too late to fall in love again? Stéphane Brizé provides a fresh finale for his film that certainly offers an excellent answer!

It is difficult to direct a good love story that would keep audiences guessing. After all I can hardly think of anything original that could happen between a man and a woman that has not been already done on camera. No matter how complicated the relationship and no matter how unexpected the twists films about relationships are always a good target for constructive criticism.

Je Ne Suis Pas La Pour Etre Aime however is a good exception from the maxima described above. The two characters are very strong, their age provides the film with an unusual aura, the story is utterly believable. I suppose the message Stéphane Brizé wished to relate to his viewers is that it is never too late to fall madly in love. As cliché as it may sound to you!!

In 2005 the film won the prestigious CEC Award for Best Film at the San Sebastian International Film Festival. In 2006 it was also nominated for Best Actor (Patrick Chesnais) at the European Film Awards.

Presented in its original aspect ratio of 1.85:1 and enhanced for widescreen TV's the film looks impressive. Even though it does appear to be a PAL-port as I see some minor "ghosting"! The PAL-master however must have been incredibly strong as colors, definition, are above average for a disc that has been converted improperly. Aside from that I did not spot even the tiniest speck or dirt on this print which makes me rather sad as I can only guess how incredible of a presentation we could have had if Seville-WB were to treat this film with the proper respect. Nevertheless, this is a very manageable effort!

Presented with its originals French 5.1 track and a 2.0 French DD mix the audio is near superb. The tango coming off the speakers sounds very strong and convincing and the rears get plenty of workout as well. I did not notice any disturbing hissing or drop-out(s).

Unfortunately there is nothing to be found on this release.

First of all I love the films Seville bring to North America!! Often they are the only source for an English-speaker to see a certain release which would not have a US distrib. I am however unsure why the Canadian producers continue to insist on limiting their customers with direct PAL-ports. I know if they were to address the issue I will be the first one to promote their products on forums such as this one. As to the actual film: it is beautiful!! It is touching, perfectly-executed, and so elegant. I can not recommend it highly enough!!