Paramount // Unrated // December 5, 2006
List Price: $49.99 [Buy now and save at Amazon]
Review by Stuart Galbraith IV | posted December 3, 2006 | E-mail the Author
Wow! CBS DVD and Paramount Home Entertainment have a powerhouse boxed set in Mission: Impossible - The Complete First TV Season, with seven single-sided DVDs in four slim cases featuring all 28 first season (1966-67) shows. Those familiar only with the mostly terrible (and, largely, in-name-only) Tom Cruise movies are in for a real treat. The series' famous machine gun pace, epitomized by an iconic opening that in quick, very contemporary cuts preview the episode to follow, was way ahead of its time. When it was new, CBS was concerned that its complex, adult storylines and at times frantic pace might be too much for Middle American viewers to follow. Looking at it now, four decades after it premiered, it almost plays like a brand-new series aiming for a '60s-retro look. 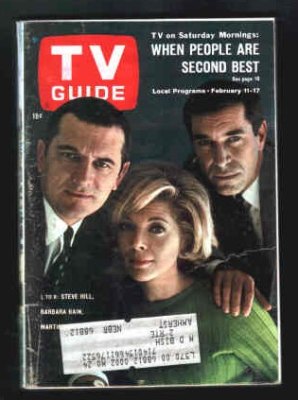 Mission: Impossible was born of the James Bond craze of 1965-66. It's essentially a spy show ingeniously structured within the context of mini-caper / heist-type films of the sort popularized in movies like Jules Dassin's Rififi (1955) and, more contemporarily, his Topkapi (1965) and the Italian-made Grand Slam (1967). Though it would become tired and repetitive in later seasons - with various cast changes, the series lasted until 1973 - in every department these early shows are terrific.

In each episode, Dan Briggs (Steven Hill) leads the Impossible Mission Force (IMF) on a seemingly, well, impossible mission. Shows open with Briggs working his way through a folder of glossy photos, theater programs and the like, selecting the best talent to comprise each particular mission. In virtually every show, Briggs' team includes cool, curvy Cinnamon Carter (Barbara Bain), whose specialty is diversion; electronics expert Barney Collier (Greg Morris); strongman Willy Armitage (Peter Lupus), for muscle; and master of disguise Rollin Hand (Martin Landau who, apparently for contractual reasons, isn't billed among the regulars, but rather gets a "Special Appearance by..." credit).

The series was originally designed to include guest stars brought in playing other agents with various specialties. Wally Cox, for instance, appears in the pilot as an expert safecracker, while Star Trek's George Takei guests in another show as a biochemist. This facet was retained somewhat in later seasons but deemphasized, especially after Landau, Bain, et. al. became stars in their own right.

The program was the creation of writer-producer Bruce Geller, who had previously written and/or produced such above average TV Westerns as Have Gun Will Travel, The Rifleman, and Rawhide. Mission: Impossible secured his reputation, though none of his later shows quite matched its success. (He did make one exceptional feature however, Harry in Your Pocket, a very good, offbeat film about pickpockets starring James Coburn and Walter Pidgeon.) Geller's scripts, along with other series writers like Jerome Ross, Ellis Marcus, and Alan Balter & William Read Woodfield, are consistently ingenious. (Mild Spoilers): In the pilot, the IMF have to steal two atomic bombs from an impregnable safe; rather than try to break in, their solution is ingeniously simple: smuggle the team's safecracker (Cox) into the vault and have him break out of it instead. In "The Carriers," the IMF infiltrate a meticulously recreated American town where foreign agents are being trained to act like ordinary Americans and carry a plague back with them to the real U.S.A. Briggs' strategy is brilliant: neutralize the plague but then allow the team to be captured, making it appear that their attempt to reach the toxic viruses has failed. In "Operation Rogosh," terrorist and mass murderer Imry Rogosh (Fritz Weaver) is kidnapped by the IMF, drugged into a state of unconsciousness, awakening in what appears to be a maximum security prison in his Iron Curtain country - three years later! All of this is in fact an elaborate ruse to trick Rogosh into revealing his plans for an imminent bioterrorism plot in Los Angeles.

The strength of these clever scripts is backed up with outstanding production values for a '60s TV show. Production company Desilu (then concurrently shooting both Star Trek and The Lucy Show) spared no expense, hiring no less a talent than John Alton to shoot the pilot (it was, sadly, the great cinematographer's last credit) and Lalo Schifrin to write the sensational score, and rising talent Bernard L. Kowalski to direct it. (Editors John M. Foley and Axel Hubert, Sr. cut it, setting the standard for all that followed.) The number of set-ups, the elaborate sets and location work, and number of extras confirm this was no cheap show. Subsequent episodes lean heavily on the Desilu/RKO/Paramount backlots, but still look expensive. (They continued shooting on location, however. "The Carriers" opens with an exciting scene shot in the middle of Hollywood, around Yucca and Ivar.)

Geller won two Emmys for the show's first season, as co-producer (with Joseph Gantman) of the year's "Outstanding Dramatic Series," and for his writing, while Barbara Bain won a Best Leading Actress in a Drama prize while her then real-life husband Martin Landau was nominated.

By spy show standards, the caliber of acting talent on Mission: Impossible is exceptional, with the ensemble giving extremely intelligent, low-key and subtle performances. Bain, who would be totally lifeless, like a department store mannequin, on her subsequent series with Landau, Space: 1999, is sexy and smart here; although she's an attractive woman, this sexiness comes from her performance as much as her outward beauty or her slinky wardrobe. 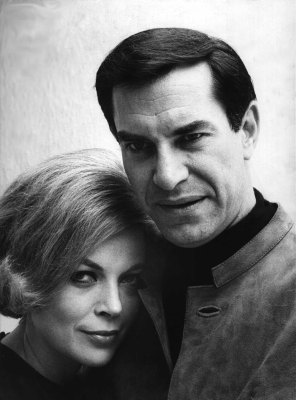 Lupus and especially Morris give strong supporting performances, but the show really belongs to Landau and Steven Hill, the latter quitting after the first season when he couldn't come to terms with a grueling production schedule that wouldn't accommodate his needs to observe the Jewish Sabbath. Hill, who later earned more acclaim as District Attorney Adam Schiff on ten seasons of Law & Order, was like Landau a product of The Actor's Studio, and his quiet amusement at capers pulled off was missed in subsequent seasons. (He was replaced by, of course, Peter Graves.) Incidentally, the show's famous "this tape will self-destruct in five seconds" is only gradually introduced. The pilot has Briggs playing a self-destructing record album, while some of the audio tapes Briggs destroys himself.

Mission: Impossible is presented in impressively eye-popping transfers far superior to all previous home video and syndication versions. The sharpness and color of these shows is extremely impressive. Episodes are in their original full frame format and are not cut or time-compressed. Typically there are four episodes per disc. The shows are offered in their original mono, but the audio defaults to a superb Dolby Digital 5.1 mix, which adds enormously to the show's excitement, and Lalo Schifrin's theme really comes alive. (Thankfully, menu screens are without music; the impact of the 5.1 mix would've been ruined had it been heard ad nauseum in the menu screens prior to selecting an episode.) There are no subtitle or alternate audio options, and no Extra Features.

Mission: Impossible: The Complete First TV Season falls short only with its lack of extra features: commentary tracks would be especially welcome in subsequent season sets. Otherwise, the superb transfers and extremely high quality of the show itself make this a must-have for classic TV and espionage fans everywhere.