Fox // Unrated // November 28, 2006
List Price: $39.98 [Buy now and save at Amazon]
Review by Stuart Galbraith IV | posted December 9, 2006 | E-mail the Author
Before ER there was St. Elsewhere. The one-hour hospital drama/black comedy that ran on NBC Wednesday nights at 10:00pm never had the kind of ratings ER enjoys, nor anything like that show's extravagant budget. Indeed, of the 60-odd series in prime time during St. Elsewhere 1982-1988 run, it rarely rose above the Bottom Ten. Against all odds it survived six glorious seasons anyway: rescued by demographics, its overall ratings may have been pathetically low, but among highly-educated PhD and postgraduate-types (presumed to have lots of disposable income) it did spectacularly well, making it an especially attractive show for sponsors like BMW, whose commercials ran during most of the show's run. Real-life doctors and nurses loved it, too. After three decades of programs like Ben Casey, Dr. Kildare, and Marcus Welby, series that deified doctors while completely ignoring the growing plight of a broken American Health Care System, St. Elsewhere was the first show to tell it like it is. In short, St. Elsewhere was the best American drama series of the 1980s, a revelation in the early-'80s TV wasteland, and it remains one of the best ever.

From its premiere episode this reviewer literally never missed it, ever. Even when I found myself stuck in a real hospital for a month during the show's second season I managed to convince my own nurses to let me stay up late to watch it. They understood. They were fans themselves. Looking back at the series' now - for the first time since it originally aired - I was especially struck by two things: just how engrained memories were of what would happen to its cast of characters over the next six seasons; and the degree, even in just St. Elsewhere's premiere episode alone, of the debt ER owes its predecessor. Virtually everything great about ER is right there in those earliest episodes of St. Elsewhere, a dozen years earlier. 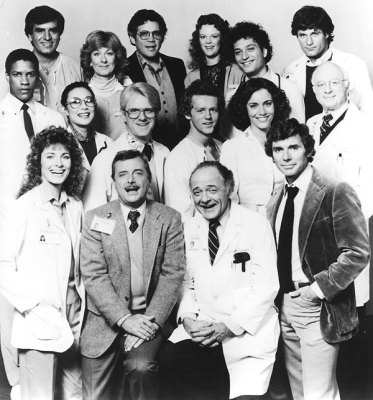 Inspired by but much superior to Paddy Chayefsky's screenplay of The Hospital (1971), St. Elsewhere paints a grim picture of an urgent medical care system constantly short of funds and manpower but mired in paperwork and politicking, of greedy medical insurance companies gouging patients or refusing treatment altogether. It was also one of the first programs to deal with the then-new AIDS epidemic and broke new ground in its depiction of overworked doctors trying, sometimes unsuccessfully, to cope with personal and professional problems of their own, and who frequently make mistakes in their diagnoses and treatment.

It was also downright subversive in a way that was virtually unheard of in 1980s television, with episodes crammed with in-jokes and a penchant for the darkly humorous. It was a realistic drama that nevertheless simultaneously embraced its TV origins, referencing other shows and iconic TV characters on a regular basis, especially those produced by its own production company, MTM. (One continuing character was a mentally disturbed man who believed he was The Mary Tyler Moore Show's Mary Richards.) For instance and for no particular reason, the parents of the younger doctors were all played by alumni of the original Tonight Show/Steve Allen Show: Jayne Meadows, Tom Poston, Bill Dana, Louis Nye, etc., as well as Allen himself.

In addition to some of the best writing ever on series television, St. Elsewhere featured performances second to none, from veterans like Flanders, Lloyd, and Daniels, to relative newcomers like Morse, later one of the most important film actors of his generation, and future stars like Washington and Tim Robbins, who guests on several first season shows. (Other first season guests include Jack Bannon, Laraine Newman, Lance Guest, Doris Roberts & James Coco, Ally Sheedy, Albert Salmi, Christopher Guest, Robert Davi, Ray Liotta, Tom Hulce, Keenan Wynn, Pat Hingle, Scott Paulin, and Howard Duff.)

St. Elsewhere looks terrific in its original full frame format in a transfer that's razor sharp with good color and clarity. The program was shot in a very eighties softness with lots of backlighting, but it looks better here than it did when it first aired. The 22 49-minute episodes are presented over four double-sided, dual-layered discs in two slimcases and are not cut or time-compressed. The original source music appears intact. The English audio is billed as Dolby Digital Stereo but sounds like clear mono to this reviewer. A mono Spanish track is included, as are English and Spanish subtitles.

Supplements include a nice overview of the program, St. Elsewhere: The Place to Be, which features new interviews with writer/co-creator Joshua Brand, director Mark Tinker, writer John Tinker, and actors Morse, co-stars comedian Howie Mandel (a surprisingly good straight dramatic actor), Barbara Whinnery (who was Mandel's wacky pathologist love interest), Christina Pickles (Nurse Helen Rosenthal), and guest star Doris Roberts. Roberts joins Mark Tinker for an Audio Commentary on one of the episodes in which she appeared, as well as another featurette, Cora and Arnie: An Outstanding Episode.

Tim Robbins talks about his guest star stint in Tim Robbins: The Punk Gets Responsible, while Morse has interesting things to say in Dr. Jack Morrison: The Spirit of Care & Empathy.

Though it lacked the deep pockets that enabled ER's production polish, St. Elsewhere was at least just as good where it counts: in the writing and, to a lesser degree, in its uniformly excellent performances. Those new to the show are in for a treat - providing Fox releases all six seasons, of course - for St. Elsewhere remains one of American television's great odysseys.