Clearly influenced by the innocent but edgy aura of the Novelle Vague Benoit Jacquot's (The School of Flesh) latest picture A Tout de Suite a.k.a Right Now (2004) follows the steps of free-spirited Lili (Isild Le Besco), a Parisian art student, who becomes involved with an enigmatic robber (Ouassini Embarek) whose luck is running out. After a deadly heist Baba and his accomplice Alain (Nicolas Duvauchelle) take shelter in Lili's house and consequently leave Paris embarking on a dicey escape through Spain, Morocco, and Greece.

Shot in glorious black and white A Tout de Suite arrives to North American shores rather late. Having gathered plenty of positive reviews during its initial screening at the Cannes Film Festival (Un Certain Regard) in 2004 Benoit Jacquot's film took awhile before it finally attracted the attention of US distribs. Unfortunately the picture received a limited theatrical run and quietly disappeared in oblivion.

Those of you who did not see A Tout de Suite at the theaters however (this reviewer included) now have the opportunity to experience a film that very much resembles what the Nouvelle Vague masters favored some fifty years ago - sumptuous black and white cinematography, bohemian characters, subtle storytelling, a sense of stylish eroticism. In addition the performances by the main cast are among the best I have seen in recent French cinema transforming Jacquot's picture into one truly pleasurable journey. 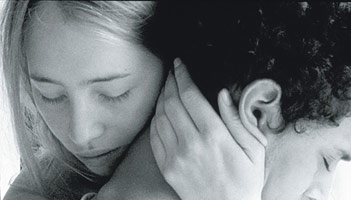 The actual events in A Tout de Suite take place in the early 1970s providing the film with a rare sense of nostalgia full of elegance which contemporary cinema more often than not simply lacks. Similar to Philippe Garrel's recently released drama Les Amants Reguliers a.k.a Regular Lovers (2005) Jacquot's film relies on rather shaky camera moves and a soft to grainy look which unquestionably compliments the moody feel sought by the French director. From the exotic vistas of Morocco and Greece to the explicit but sensually photographed love scenes between Lili and her admirers A Tout de Suite is a gorgeous film to behold.

Benoit Jacquot, whose last notable success was Sade (2002) with Daniel Auteuil (the director's less publicized Adophe starring Isabelle Adjani did not even get a North American distributor), certainly appears to be in top form again as everything in A Tout de Suite clicks! Isild Le Besco's character is near flawless and had this story been filmed some forty five years ago I am convinced Danish icon Anna Karina would have likely been a candidate for Lili's part.

The true charm of A Tout de Suite however stems from Jacquot's uncanny ability to capture human emotions like only few other directors can. In a manner similar to what we witnessed in his earlier L'Ecole de la Chair a.k.a The School of Flesh (1998) where Isabelle Huppert fell for a much younger bisexual male prostitute and managed to undergo a colossal character transformation the adversity Lili endures in A Tout de Suite leaves her character profoundly changed. Like Huppert's face was able to reveal what words would have failed to express Isild Le Besco's acting is what separates this film from the rest of the crowd. Mark the name of this young French actress, she is something special!!

Presented in its original aspect ratio of 1.85:1 and enhanced for widescreen TV's the film looks good but not solid. The demise of HVE as it appears has left some big shoes to fill as what Image continue to do with the films that would have come from the Chicago-based label's now closed offices routinely arrive on the US market as PAL-ports. Just like Carlos Saura's Salome Benoit Jacquot's A Tout de Suite is improperly converted from a PAL-source. The good news here is that the "ghosting" is very minor and because of the film's technical composition (soft and often grainy image) you would be hard pressed to separate what should be blamed on the conversion from what is indeed the film's true look. This being said blacks are solid and convincing and whites are quite well handled. Contrast, as difficult it is to say, is also very pleasing and I could not see any disturbing print damage/imperfections. Edge enhancement is kept at a tolerable level although some of the "Greek scenes" are a little edgier than what I would have liked to see. Nevertheless this is a good presentation which could have been excellent had the transfer been handled differently.

Presented with a French DTS 5.0 mix, a DD 5.1, and 2.0 tracks the film has been treated quite well. The evocative score by Tangerine Dream (replacing the original score by Pink Floyd) comes off the speakers well as there are no imperfections that I could detect. The dialog is also very easy to follow and those fluent in French should not have any trouble understanding the actors' speech. With optional white English subtitles.

Aside from the original theatrical trailer, a DVD-ROM Press Kit content, and four extended/deleted scenes there is nothing else to be found on this DVD. This being said, I am a bit unsure about the inclusion of the deleted scenes as they do not offer English subtitles. So, why would the viewer want to spend time on them as the dialog appears to be of crucial importance in all four of them? An Image gaffe perhaps??

A favorite director of mine Benoit Jacquot's A Tout de Suite is a sensual journey into the psyche of a young girl willing to explore. Visually stunning this is also a film heavily influenced by the spirit of the French Nouvelle Vague. The R1 disc is certainly acceptable but Image's recent practice of PAL-porting leaves a bitter taste in the mouth. How difficult could it be to deliver what HVE were known for: properly converted transfers??