Determined to put an end to the misery that has been tormenting the Parondi family in the Sourthern village of Lucania Rosaria (Katina Paxinou) and her sons Rocco (Alain Delon), Simone (Renato Salvatori), Ciro (Max Cartier), Luca (Rocco Vidollazi) pack their belongings and head to Milan. There they will meet the only Parondi who has been living away from the family: Vincenzo (Spiros Focas).

Upon arrival in Milan, however, the Parondis quickly discover that making ends meet will be just as difficult. There are no jobs, housing is expensive, cold winter has seized the North. But Milan is a big city, a rich city! Someone, somewhere, must need an extra pair of hands!

Simone is the fist one to land a job. A local scammer offers the southerner a deal he can not resist: boxing for cash. Without thinking much the proud Parondi accepts and soon money start coming his way. And so are women. After an exhausting fight Simone is introduced to a beautiful whore whose charm the southerner can not resist. Shortly after Simone falls madly in love with Nadia (Anne Girardot).

Vincenzo who has arrived in Milan a few months earlier to help the Parondis find a place to live is also in love. Instead of finding an apartment for the family he has fallen for the beautiful Gineta (Claudia Cardinalle). Gineta's family is unaware that the Parondis are coming to Milan.

Rocco finds a job at a busy laundromat where his subtle manners surprise everyone. The owner, an older lady, is visibly impressed and happy that a good man is now helping the business. Unfortunately, Simone's shady dealings will soon hurt the respect Rocco has gained.

Ciro enrolls in a school for mechanics hoping to land a job after graduation. While the rest of the brothers work Ciro spends his time studying. Luca helps his family as much as he can.

Soon, however, the Parondi family crumbles. Simone begins to drink and bet money he doesn't have. Rocco heads to the army and upon return to Milan falls madly in love with Simone's joy: Nadia. Their relationship will produce a tragedy which no one could have predicted. While Ciro is determined to grow roots in the city Rocco begins to dream about going back to Lucania. The youngest Parondi, Luca, is unsure what to do: should he listen to Rocco, Simone, or his mother. Vincenzo decides that love is more important than relatives and leaves.

The once proud Parondis are no longer a family!! 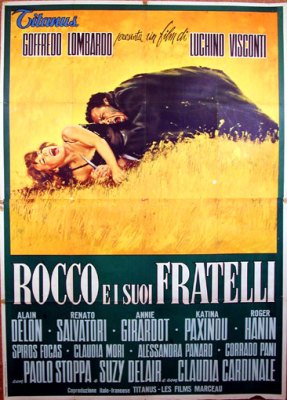 Presented in its original aspect ratio of 2.35:1 an enhanced for widescreen TV's Rocco and His Brothers has been digitally remastered and restored for this new SE edition by MEDUSA-Italia. The result however isn't what I expected. Here's why:

First let's make it clear before we go into detail discussing the pros and cons of this DVD: this is the best English-friendly version of Visconti's film on the market. Plain and simple!

With this out of the way I think that what I have in my hands will sooner rather than later be bettered by another producer, possibly Italian, and the special edition by MEDUSA will be looked upon rather unfavorably. Why? Because even though the new print offers a substantial improvement over the R1 hack-job the overall quality isn't what this classic deserves. Contrast is good but not solid, blacks are well-rendered but not lush, whites are often lacking. Furthermore, detail is something I am not impressed with as during key scenes (outdoor, night scenes) there is a notable degree of softness which I believe will be addressed in the future.

I also noticed some very strange "combing"-like effect which I am unsure how to describe. I played the disc on three different machines and I was able to detect it on all three of them. It is very minor and I do believe that most of you will not even notice its presence but suffice to say something here isn't right. What the actual "effect" translates into is a weak definition (that is the best I can describe it) which if you look really hard seems like "combing". This is the first time I have seen anything like this appear on any disc and I am not quite so sure what to make of it.

On a positive side (and there are plenty of pluses here) MEDUSA have done a spectacular job restoring the image. There are hardly any debris here and damage is practically eliminated. I was able to spot a few specs here and there but truly the overall restoration is indeed superb.

So, what to make out of this disc? First, I am convinced those of you who have the slightest interest in owning this classic story should look for the MEDUSA edition. There are more pluses here than minuses. Certainly the difference between the R1 and R2 versions is staggering. Second, I am a bit undecided what the near future of this film is! It seems like the Italian distribs have invested a lot of time and effort producing this double disc and for awhile this might be what the market will sell. Should we expect a new and substantially improved transfer? Absolutely! I would be surprised if in Italy no one revisited Rocco and His Brothers given the current HD trend! Or, perhaps the unfounded rumors that Criterion will have something to do with Visconti's classic will finally produce something!

Presented with its original Italian Mono track and optional English, French, and Italian subtitles the audio mix is solid! The great score by Nino Rota comes off the speakers marvelously and I really could not detect any defects here. The English subtitles are of extremely high quality and there were no syntax issues to report. Very well done!

All of the extras on this disc are in Italian only! The double disc comes in a stylish thin digiack which offers a massive 40-page booklet in Italian with plenty of cast info and historic notes. If fluent in Italian the booklet is a treat! Aside from that what we have here is the original theatrical trailer, a photo gallery, and a Behind the Scenes section.

One of the all time great Italian films is currently lacking a deserving presentation in the US. In Italy local distrib MEDUSA have put some serious effort into producing a lavish double digipack. I am however a tiny bit unsure their print is as good as it could and should be! But considering that there are no other, better, alternatives on the market I must recommend this disc highly! If one day a superior disc arrives I shall accordingly update this article.