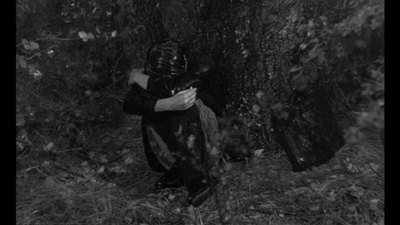 Mouchette is a young girl living in a hard world. Growing up in a small French town, she is subjected to derision from her teachers, the taunts of lecherous boys, and enforced labor from her bootlegger father. While regular life goes on all around her, Mouchette is forced to just watch. An anonymous kindness buys her a ride on the bumper cars at the local carnival, but the fun can never last. Real life will always intrude.

Robert Bresson's 1967 feature, Mouchette, is a harsh study of human cruelty. Mouchette (Nadine Nortier) couldn't have the odds stacked higher against her. The one person in the world that would likely show her love is now immobile. Her mother (Maria Cardinal) is too sick to get out of bed. Given her position in the family, maybe her illness is an indication of what happens to caring individuals in this rough existence. Regardless, it forces Mouchette to take on the motherly tasks, preparing everyone's meals and feeding her younger sibling. At one point, it even looks like she might try breastfeeding when there is no fire on the stove to heat the baby's milk. She's going to be forced to be an adult even before her body is capable.

And yet, in so many ways, Mouchette is still a child, and often a petulant one. It's hard to blame her for lashing out, though. Most days after school, she hides in the ditch and throws mud at the girls who laughed at her in class. To get home, she cuts through the backwoods, staying off the regular roads everyone else takes. It's not just a symbol of her outsider status, but also her place of solace. Out in nature, she can be alone, and it demands nothing in return. Perhaps that's why Mouchette shows more compassion toward a wounded rabbit than she does just about anyone else in the picture. (Mouchette is based on a book by Georges Bernanos, who also wrote the novel that inspired Bresson's Diary of a Country Priest, another story where the solace of the natural world leaves its titular character with nowhere to hide from dark inevitabilities.)

Nature is unpredictable, however, and a bad storm ends up stranding Mouchette in the forest, the wild weather patterns setting up the wild night that will remove the last pieces of Mouchette's childhood. After an altercation between a poacher (Jean-Claude Guilbert, Au hasard Balthasar) and a gamekeeper (Jean Vimenet), Mouchette runs afoul of the poacher, and by the time she gets home, things there are taking a turn for the worse. The townspeople can sense the change in her, and the initial sympathy they extend to her is soon withdrawn. It doesn't matter, though. Mouchette doesn't know what to do with their kindness, anyway. Her final act in the movie could be one last indulgence in childhood that brings dire consequences, or she might be knowingly hurtling herself into the fate she's accepted. The beauty of the lingering final shot is that Bresson leaves the question up to you.

Mouchette bears some resemblance to Robert Bresson's previous feature, Au hasard Balthasar, the story of a small donkey who suffers the abuse of just about every human he encounters, and through his suffering, shows himself to be more human than they are. Little Mouchette is a more complex creature, because she is afforded the range of human responses. She can suck up her fate, harden herself against it, or retaliate in kind. Bresson favored working with non-actors. He referred to them as "models," and he pushed them towards performances that weren't performances, that were more a series of reflexive actions, movements that were so contrived they came off as natural. Nadine Nortier had never acted before Mouchette and she would never act again, thus making her the perfect model for Bresson to animate. The girl barely speaks through the picture, instead silently observing as the rest of society moves against her. Her expression gets harder as the obstacles pile up since any indulgence in a smile or laughter has only been met with a more violent slap (sometimes literally). Her face practically becomes a clenched fist. The performance is tragic and heartbreaking, not because Nortier lets us in, but mostly because she keeps us out.

Perhaps most striking in the face of Bresson's increasing disgust for our species' never-ending capacity for selfishness and meanness is the fact that he never let's his heroine give up. Even as she frustrates us with her tight-lipped stoicism and her bratty retaliation, it's hard not to cheer Mouchette on. Early in the film she cries often, but after that fateful turn, she gets it all out and doesn't let anyone make her cry again. As I reconsider that ambiguous ending once more, I lean toward seeing it as a finale that comes with one last act of defiance. Mouchette doesn't give in or give up, she takes charge.

Of course, she also does it alone, so maybe Bresson isn't letting us off the hook after all. Maybe standing against a hard life only takes us to harder, more isolated positions. In the prologue, Mouchette's mother refers to a stone that is inside her, a metaphor for her illness. But then, it could be where we all end up, weighted down, and the more we struggle, like one of the bird's ensnared in a poacher's trap, the more it hurts. Bresson only releases Mouchette by letting that full weight land on her, and thus pushing her under. 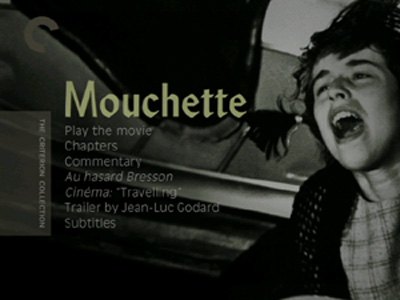 Video:
The Criterion transfer for Mouchette is sized for a 1.66:1 aspect ratio, and the black-and-white picture is flawless. I saw no surface scratches, no ghosts, nothing out of order. It's one of the best DVD images I've ever seen.

Sound:
While the sound is monaural, the mixers didn't sit back lazily and just let it run along at one level. Bresson indulges in some magnificent silences, and when Mouchette is quiet, you feel it. By contrast, he also carefully chose his sound effects. The rumble of automobile engines and gunshots and other background noises are intrusions in the tranquility Mouchette seeks, and they come through the speakers as loud and jarring.

The English subtitles are clear and easy to read, moving at a manageable pace. Once or twice I noticed a line came a little earlier than the spoken dialogue, but that was the closest I could get to something to complain about.

Extras:
Film historian and critic Tony Rayns recorded a commentary that is a thorough, point-by-point examination of the movie. He points out key images, repetition, editing techniques, and the use of sound and image to achieve Bresson's cinematic ideals. Rayns also digs into the greater meaning of Mouchette in thought provoking ways, with a particular focus on Mouchette's sexual awakening. 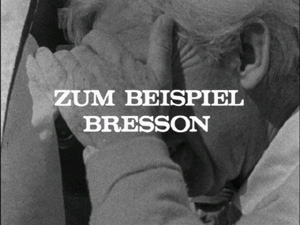 There are two documentary features on the DVD, both dating from 1967. One is a half-hour compilation of on-set footage, Au hasard Bresson. It shows Bresson at work and also includes long monologues of the director sharing his theories about moviemaking, thoughts similar to things he wrote in his book, Notes on the Cinematographer. The second is a segment from the French TV series Cinéma. It has more footage from the shoot, as well as interviews with Bresson, Nadine Nortier, and Jean-Claude Guilbert, who is pretty frank about what it's like for a working-class man to suddenly take a gig as an actor.

Mouchette's trailer was famously cut by auteur Jean Luc-Godard. The final result is almost like a minifilm unto itself, full of Godard's playfulness and trademark use of title cards, but also haunting in its own right, managing to convey the bleak timbre of Bresson's movie through carefully isolated images.

The interior booklet features an essay by author Robert Polito. It's a good article and well worth reading after watching the movie and reflecting back on what you've seen, as Polito provides a lot of insight into the meaning in both the story and Bresson's technique. Put this together with the Tony Rayns commentary, and you're going to be taken as deep into Mouchette as I think it's possible to get.

FINAL THOUGHTS:
Mouchette is a powerful portrait of one girl's transition into womanhood and the dreary people who persecute her along the way. It's a devastating examination of human cruelty, and the Criterion edition of the 1967 Robert Bresson film takes the discerning viewer through this complex and challenging tale, creating greater understanding of Bresson's art. Highly Recommended 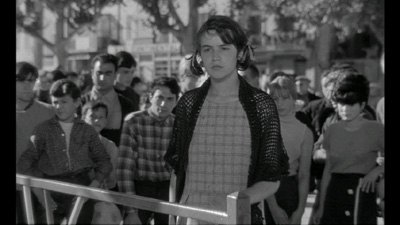