To the Left of the Father

Luiz Fernando Carvalho's Lavoura Arcaica a.k.a To the Left of the Father (2001) retells the tragic story of a Lebanese-Brazilian family where a past incestuous relationship has forced Andre (Selton Mello) to run away from his parents. Determined to have his brother back Pedro (Leonardo Medeiros) embarks on a controversial journey with plenty of unknowns.

Based on the acclaimed book by Raduan Nassar To the Left of the Father is a long and heavy yet visually stunning picture that delves deep into Brazilian culture providing a look at a country with a rich history. Carvalho's camera compliments Nassar's story with the necessary emphasis on detail and the dialog hardly interferes with the picture's desired indolent tempo.

Clocking in at approximately 3 hours however for some To the Left of the Father might prove rather difficult to endure. The unusually long camera takes combined with the literary (heavily poetic) lines the actors recite supply an environment better suitable for a theater play rather than a motion picture. As a result some may unjustly conclude that Carvalho's work is too self-confined, appropriate only for native viewers. 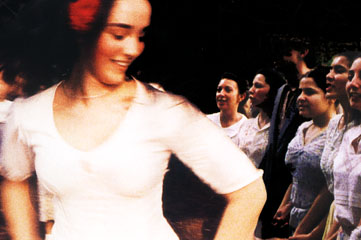 Mixing Brazilian with Lebanese folklore To the Left of the Father reminded me a lot about the evocative but noticeably flashier aura of Tony Gatliff's Vengo (2000). There is something unusually beautiful in the manner Carvalho's camera captures the emotions running through the faces of the main protagonists. Anger, joy, lust, pain, are so easily recognizable – this could have been just as good of a silent picture had Carvalho chosen to avoid dialog and music.

Foreign film enthusiasts will also find To the Left of The Father to be a film of intended ambiguity. While Carvalho tackles an array of complex issues his message extends far beyond what Andre and Pedro must overcome. At the same time the director also attacks conventional truths that have become inseparable part of Brazilian culture.

Finally To the Left of The Father benefits a great deal from an enormously talented cast that includes legendary actor Raul Cortez, rising star Selton Mello, as well as Leonardo Medeiros who is set to appear in Oswaldo Caldera's much anticipated Historias de Alice (2007).

Well, for once it pays off to have an American company copy directly the original release of the film they are distributing!!

So, having copied the Brazilian DVD of To the Left of The Father KINO have actually "provided" a remarkable disc. Why? Easy answer: Brazil also happens to be under the NTSC umbrella the US and Canada share. Therefore what we have here is a flawless NTSC-NTSC transfer.

This being said the film is presented in its original aspect ratio of 1.85:1 and has been enhanced for widescreen TV's. Contrast and detail are simply fabulous, colors are lush and vivid, print damage is non-existent. Edge-enhancement is tolerable (even though the transfer does offer an edgier than what I like look) and aside from some digital-noise that I was able to spot on a couple of scenes this disc is indeed flawless. It makes you wonder, really, what if one day KINO actually decide to do their films justice by providing proper transfers such as this one (which ironically comes by default).

The only audio option here is Portuguese 2.0 and as far as I am concerned this is a bit of a letdown as there is some marvelous music that compliments this film. There are no issues to report here but surely one must wonder why the US release lacks a more elaborate 5.1 track. The disc also comes with optional English, Spanish, French, and Portuguese subtitles.

Aside from a stills gallery the only other extra on this disc is a rather unremarkable and short (12 min) interview with the director of the film in which he talks about his fascination with nature and of course what influenced his decision to film Nassar's book.

Perceived by many as the best Brazilian film from the last century To the Left of The Father is indeed an impressive work. For once the transfer KINO provide is also on par with what one would expect the company to deliver with each of their releases. Highly-Recommended.