Curse of the Fly

Fox // Unrated // July 3, 2006 // Region 2
List Price: $25.00 [Buy now and save at Amazon]
Review by Stuart Galbraith IV | posted January 7, 2007 | E-mail the Author
The third of three loosely-connected films based on George Langelaan's famous short story, Curse of the Fly (1965) has gotten a bad rap over the years. The modestly-produced first picture, The Fly (1958), had been an unexpected hit for 20th Century-Fox, so much so that it spawned vastly inferior imitators like The Alligator People (1959) and The Wasp Woman (1960), as well as a quickie sequel of its own, Return of the Fly (1959). Where the first two pictures were shot on Fox's lot in Beverly Hills, the unjustly maligned Curse of the Fly was produced in England for very little money (less than $100,000) and stylistically looks nothing like its predecessors.

All three movies deal with efforts to develop a machine that will transmit matter electronically, the ultimate aim to instantly teleport (a la the transporters on Star Trek) people and resources from one part of the globe to another, thus invaluable in times of natural disasters, etc. In The Fly, Canadian inventor Andre Delambre (David Hedison) nearly succeeds but carelessly tries to use his machine before it has been perfected. Unaware that an ordinary housefly has flown into the glass-enclosed teleportation chamber with him, their molecular structures scramble during the reintegration process with disastrous results. Impressively restrained, The Fly was unusual in that its horror was almost entirely psychological, focusing on concepts generally unexplored in Hollywood sci-fi / horror movies up to that point: the loss of identity and basic humanness and the breakdown of an idealized, Eisenhowerian nuclear family.

Return of the Fly, with Brett Halsey playing the suddenly full-grown son of Hedison's character, is by contrast what the first movie might have been had it not been produced with taste and intelligence. Though enjoyable on its own terms, the sequel is depressingly unimaginative in every department and at times awesomely illogical, ultimately a crassly-made retread made for no other reason than to squeeze additional revenue out of the first film's success on as little investment as possible. 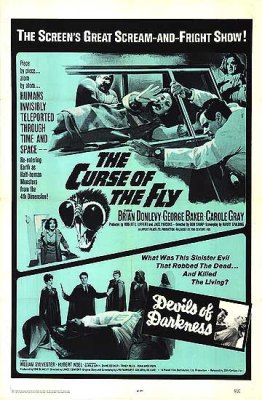 Though only seven years had passed since the release of the first film, Curse of the Fly tells the story of the third and fourth generations of Delambres, with aging character star Brian Donlevy cast as Henri, the son of Halsey's character. (Logically, this would place the action around 2033, though the film is clearly set in present-day Quebec and London.)

After escaping from a mental institution just outside Montreal, once-promising concert pianist Pat Stanley (Carole Gray) is found wandering half-naked by Martin Delambre (George Baker). He puts her up at his hotel, and over the next week they fall in love and eventually marry, this despite the fact that neither knows very much about the other. He's unaware of her mental breakdown; she has no idea that he's afflicted with a strange malady that occasionally causes him to buckle over in extreme pain and temporarily show signs of extreme old age.

Meanwhile, in London, Martin's father, Henri, is nursing radiation burns he received while teleporting himself from Quebec. Henri is convinced the teleporter will be perfectly safe once some new equipment arrives, but Martin's younger brother Albert (Michael Graham), who operates the London end of things, has had enough. He believes the machine will never work properly and wants to marry, leaving the family obsession behind him. Authorities in London become suspicious - how was Henri able to enter the country without a passport? - and Henri beats a hasty retreat back to Quebec in the device.

Upon returning Henri is introduced to his new daughter-in-law but quietly urges Martin to get rid of his new bride. After all, Martin has inherited his grandfather's scrambled DNA (causing him sudden chills and the extreme aging, controlled only through daily injections) and, worse, what if Pat learns of the family's darkest secret: three half-human, insane mutants (including Martin's former wife) that resulted from earlier, failed teleportations, kept locked away in cages on the family's estate?

Audiences were probably expecting another fly-man in Curse of the Fly and were likely disappointed by the film's sometimes inadequate though creepily Lovecraftian makeups. Indeed, the film is much closer in spirit to Daniel Haller's concurrent film of Die, Monster, Die! (1965), based on Lovecraft's The Colour Out of Space, than the two earlier Fly movies. That said, what's impressive about Curse of the Fly is that it paints a compelling portrait of the last days of a cursed family in its death throes. Significantly, unlike the upright, phone booth style teleportation machines of the first two films, the glass chambers in Curse of the Fly are horizontal, resembling glass coffins.

Henri is the familiar anything-in-the-name-of-science inventor so convinced that his machine's benefits are so profound that he's willing to pay any price to see its completion and thus blinded by his own, amoral actions. The fact that Donlevy had played the equally determined but moral Professor Quatermass in two earlier films (The Quatermass Xperiment and Quatermass II) lends an unexpected uneasiness to the character. It's unsettling to see the heroic Quatermass lose his humanity.

Albert, who did not inherit his grandfather's genes (cleverly, it's the "curse of the fly"), sees only too clearly the monstrousness of his father's inhumanity in a startling sequence that anticipates David Cronenberg's 1986 film of The Fly: Wanting to get rid of two of the mutants, Henri's transports both bodies at once, and the fused jumble of flesh and bones that arrive in London so appalls Albert that it forces his hand.

The film was stylishly directed by Don Sharp (Kiss of the Vampire, The Face of Fu Manchu) and he handles the horror elements particularly well, starting with the film's nightmare-like opening, with Pat, clad only in a bra and panties, bursting through a window at the mental hospital, a sequence shot in dreamy slow motion. Another good scene finds Pat near the caged mutants, which Sharp leaves unscored, allowing the crunching of dead leaves under Pat's shoes and the distant cawing of crows to generate a feeling of dread.

Bert Shefter's score, which adapts music written for the original films (by Paul Sawtell and Shefter, respectively), is extremely good for a low-budget film, with haunting cues for piano that tie nicely to Harry Spalding's (Night Train to Paris) screenplay, which itself references the earlier films in imaginative if inconsistent ways.

Spalding's script also suggests monstrosities that are let down by the makeup. After Pat captures a glimpse of Martin's unfortunate first wife, Judith (Mary Manson), at the family piano - cleverly, she coincidentally also plays the instrument well - the script has her calling Judith "that woman-thing" even though she is no more disfigured than a burn victim. (One of the other mutants is merely a fat, Tor Johnson type with a Colossal Beast-type face with what looks like pantyhose over his head.) Further, a Mrs. Danvers-type housekeeper, Wan (Yvette Rees), is clearly played by a Caucasian actress masquerading as an Asian via inadequate eye makeup. That her husband is played by authentically Asian actor Burt Kwouk only accentuates this. However, the fused mutants near the end are impressively horrifying by mid-1960s standards; the Production Code of the time prohibits the camera from getting too close to the gruesome thing, but even from a distance the design is genuinely disturbing. 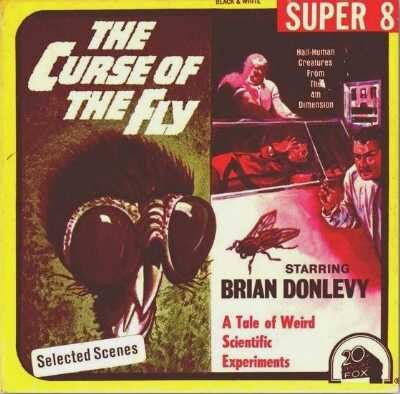 Fox's Region 2, PAL-formatted Curse of the Fly is presented in its original CinemaScope aspect ratio (about 2.35:1) in an excellent 16:9 enhanced transfer. The image is sharp with good contrast. The mono audio over the Fox logo is horrendous, but is okay during the feature itself, though it exhibits signs of age-related wear. Optional English subtitles are included; there are no Extra Features.

Curse of the Fly concludes with a title card asking, "is this the end?" suggesting another sequel might have been produced had this been more successful. There were to be no more original Fly movies, but Curse of the Fly brings the saga of the luckless Delambre family to a satisfying conclusion, in a film that deserves a second look.