French distribution house Clavis Films have decided to provide a rare gift to English-speakers by releasing an elegant 3DVD set of Miklos Jancso films including the Hungarian director's award-winning drama ÍGY JÖTTEM a.k.a My Way Home (1965), the controversial CSEND ÉS KIÁLTÁS a.k.a Silence and Cry (1968), and MÉG KÉR A NÉP a.k.a Red Psalm (1972). Each of the DVDs in this boxset comes with optional yellow English and French subtitles.

Days before the end of WW2 a young Hungarian soldier (Bela Barsi) wanders in an area where the Red Army has moved in. Cold and hungry Lezengo steals a used Nazi uniform which immediately makes him an easy target for the patrolling Russian soldiers. The Hungarian is quickly captured and sent to a nearby food depot with a sizable amount of cattle. There a Russian soldier left to distribute the milk will become Lezengo's best friend.

Unexpectedly however the Russian dies thus granting Lezengo his freedom. The young Hungarian dons an old Russian uniform and leaves. Back home Lezengo is brutally beaten up by a group of frustrated Hungarian soldiers.

A powerful film about one man's journey to freedom My Way Home is a visually stunning exploration of a country on the edge of political chaos. Abandoned by the Nazis and snubbed by the Russians those who survived the war in Hungary must have felt betrayed. The political stagnation that engulfed the country as well as the inevitable separation of heroes from traitors is particularly well represented here even though in the grand scheme of things My Way Home remains a film about human suffering.

In 1919 Bela Kun and the Hungarian Communists attempt a coup-de-tat meant to replace the government of Count Michael Karolyi. Most of the reds however are quickly chased off by the loyal military forcing them to hide in the countryside. Shortly after Admiral Horthy and his men launch a tireless campaign whose one and only goal is to exterminate the scattered insurgents.

A much more intimate look at Hungarian history Silence and Cry follows the drama between two friends who find themselves on the opposite sides of the political spectrum.

Perhaps the most complex and impossible to deconstruct from the three films in the boxset by Clavis Films Silence and Cry is an attempt by Jancso to go a step further in exploring the human psyche when faced with severe political antagonism. Unlike My Way Home however this is a film that remains fairly intimate in its analyzing of right versus wrong and for the most part it shies away from using symbolic narrative. As a result the moral dilemma the two protagonists struggle with isn't as far reaching as the dramatic epilogue witnessed in My Way Home.

The visual composition however certainly is. Jancso's camera is noticeably more focused (emphasizing the intimate element witnessed in the struggle of the two friends to remain true to their political credos) and the emotions raging in the two men are captured perfectly.

The shocking finale is once again composed with a reoccurring for Jancso's films element - unbridled violence - and the impact Silence and Cry has on those who see it is devastating!

The most indicative for Jancso's political orientation film from this boxset certainly appears to be Red Psalm. Revealing an unusual color scheme (intentionally exaggerating the use of red) this is also a film that hardly compares to My Way Home and Silence and Cry. Imitating a grandiose theater play Red Psalm offers an abundance of biased political recitations as well as direct quotes from the works of Marks and Enghels.

Unlike the previous two films mentioned above Red Psalm also lacks a clearly identified main protagonist(s). It is the masses that become the focus of attention here and their ability to dissuade the intentions of those sent to eliminate them is crucial.

Stylistically however Red Psalm is just as impressive as My Way Home and Silence and Cry. Jancso's camera captures the marches and dances of the peasants as flawlessly as it does the killings of the soldiers who disobey the orders of their commanders. Brutality, a favored theme in Jancso's work, plays an important role especially during key scenes (the naked women marching away from the soldiers) where a political statement is being made. Finally, the repetitive use of the La Marseillaise next to traditional Hungarian songs is indicative for the film's political agenda. 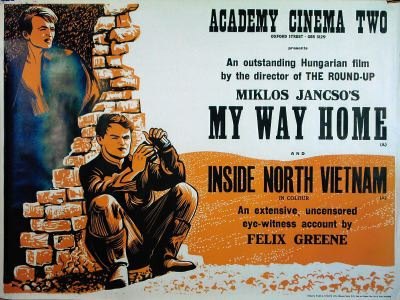 How Does the DVD Sound and Look?

Presented in its original aspect ratio of 1.37:1 the film looks good but not great! I know that there have been some concerns amongst film aficionados as to how good the quality of the transfer provided by Clavis Films actually is (I would assume mostly due to the fact that the company has a very short track record of well-publicized releases hence there hasn't been any coverage for their products in English-speaking territories). Fortunately enough Clavis Films deliver a good, for some this may be a relative term and I certainly understand why, print with good contrast and very-well done color reproduction. This being said there are some very minor specs here and there and a few print-burns but once again what we have here far exceeded my expectations. This being said Red Psalm most certainly appears to have been sourced from an analog master which is not a terrible occurrence particularly given the fact that a large number of Jancso's films are unavailable in his home country in ANY format. From what I understand until recently the rights for this film were also in limbo.

The reason I mention all of the above is to create a realistic picture of what has been done by Clavis Films, what was available for them to work with (a guess of course), and what the final product is. So, all things being considered this is certainly a print that should please those who want to own the Hungarian director's work in their collections.

Presented in its original aspect ratio of 2.35:1 and enhanced for widescreen TVs Silence and Cry is significantly better looking than Red Psalm. This may not be immediately recognizable if you watch your films on a regular tube but blown through a digital projector the print for Silence and Cry offers stronger detail and tightness. Once again however those expecting a solid restoration job from Clavis will be slightly disappointed. Why? While the print is of good to very good quality it does reveal some occasional scratches and specs indicating that in-depth clean-up has not been performed. On a positive side the black and white composition of Silence and Cry isn't affected by any inconsistencies in terms of truthfully reproducing the color-scheme, meaning that you will see plenty of subtle grays, deep blacks, and solid whites. All in all once again I have absolutely no problem recommending this to you.

Well, I have some good news here and some not so good news! Let's begin with the not so good one: My Way Home appears to have been re-framed to 1.85:1 from its original aspect ratio of 2.35:1 (and yes, just as The Red and the White this is the original aspect ratio) and then enhanced for widescreen TV's. It also appears to have been sourced from a secondary analog master even though it is rather difficult to tell immediately. The good and mostly surprising news is that this print actually looks best (out of all three in the boxset) when blown out through a digital projector. I am unsure why but detail appears good and for the most part the image remains stable. There are however a number of other issues here that when put together diminish the overall quality of this presentation a great deal.

First of all My Way Home reveals a number of small scratches and specs that do no necessarily affect the image quality but their persistence is most definitely annoying. Second of all there is some minor digital noise which especially during some of the brighter daylight scenes is quite noticeable. Third, I noticed some occasional shimmering, mostly in the upper part of the screen, which does appear on a regular basis. Now, none of these occurrences impact the presentation to a point where you won't be able to enjoy the film but certainly one must wonder what could have been had this film been given a full-blown restoration job.

The audio presentation for all three of the films is without a doubt on par with the video treatment described above. There is a decent amount of clarity for the mono Hungarian tracks, dialog is easy to follow, and balance with the exception of Red Psalm (some minor issues towards the second half of the film) acceptable. It is easy to hear that (once again) full restoration work has not been performed but take my words for granted: the audio treatment is more than decent and suitable. Finally, I must specifically point out that on all three discs there are some reoccurring syntax mistakes. At times these are minor spelling mistakes, at times these are simply incorrectly structured sentences that may raise a few eyebrows. All things considered however I must conclude that none of these issues will affect your viewing experience. All three discs are PAL-encoded, Region 2, and appear with optional English and French subtitles.

Aside from filmographies and cast info that appear in all three discs as well as extracts from other Clavis Film releases Red Psalm includes the 54 min. short "Messages of Stones" (with optional English and French subtitles) which I regret to announce looks just as pretentious and dreary as the short included on the Second Run disc for The Red and the White (which is a different installment from the same series). Perhaps some will appreciate it more than I did and find it worth-seeing. I did not!

I know that there are many film aficionados out there who are on the fence with this boxset unsure whether or not it is worth spending money on it. I want to make it very clear: the quality of the prints provided by Clavis Films is substantially higher than what Second Run provided for their release of The Red and The White. Furthermore, yes, there are some minor issues with the technical presentation but in the larger scheme of things I am willing to accept the imperfections described in this review and appreciate what the French company has done especially when we, English-speakers, have no other way of seeing these films. Finally, if this should matter to any of you in 2006 I ranked this Jancso boxset only second to Greek distrib New Star and their impressive Angelopoulos collection. It is that important to me!