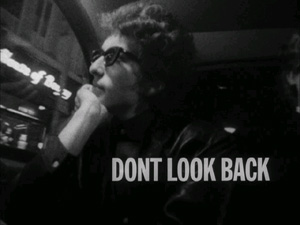 D.A. Pennebaker's Don't Look Back, a profile of Bob Dylan on his 1965 British tour, is arguably the most influential rock 'n' roll documentary of all time, predating even the Maysles' Gimme Shelter and Michael Wadleigh's Woodstock. Thirty years later, Grant Gee pretty much orchestrated his Radiohead feature, Meeting People is Easy, note for note from Pennebaker. Ironically, given the movie's title, Don't Look Back is a film that deserves to be revisited every couple of years. While the movie has been on DVD since 1999, this new 65 Tour Deluxe Edition is a welcome upgrade in packaging and transfer.

Make no mistake, Bob Dylan in 1965 was one cool cat. The smartest thing Pennebaker did was to stay out of Bob's business and just hang around. The performer allowed his camera unbelievable access. The cramped shots taken from within the entourage, tracking Dylan from press conferences to backstage waiting rooms and through taxi rides up to the hotel, bring the viewer incredibly close to the subject. Pennebaker isn't just a fly on the wall, he's landed in the ointment, and he captures the bare reality of touring life. There is the whirlwind of fan activity, the backroom negotiations, and more glad-handing than any one person should be expected to take. Hence, the onset of ennui that compels Dylan to go into some mesmerizing tirades, tearing into and tearing down journalists who he sees as beneath him. His behavior is arrogant and mean, but yet you can't blame him and you even sort of like him for it.

Other great moments come when participants have let their guard down, such as Joan Baez ribbing Bob by gently parodying his lyrics or when Pennebaker captures the expression of hurt on Alan Price's face when he tries to tell everyone it's no big deal that he was jettisoned from the Animals. Then, of course, there is the running Donovan joke, giving Pennebaker an unexpected throughline.

And there is also the music. We don't get a lot of complete performances in Don't Look Back, usually just snippets, often of the same song, underlining the tedium of the endless string of performances. Yet, Pennebaker is smart, and he knows that when it's all said and done, it's the music that counts, and no portrait of the singer would be complete without it. So, he lets the movie climax with the last big night, before delivering a coda that is so perfect, you can't believe he doesn't drop the camera then and there and kiss Dylan and manager Albert Grossman for delivering it to him. It lets all the air out of the rest of the movie, reminding us that most of what has happened is just palaver, and that Dylan's insistence that he is just a guy like anyone else is more true than the preceding ninety minutes suggested.

The main disc here is essentially the same as Docurama's old edition. Same extras and even the same menu, though the art on the DVD itself has changed to fit the new aesthetic of the whole box. There is one noticeable difference, however, and it's a good one. Even though it's not trumpeted anywhere on the box (both versions tout a new "digital" picture), I've been informed Don't Look Back has received a brand-new high-def transfer from a fresh digital master. A quick comparison shows that this new version definitely has much stronger picture quality than before.

Even with those improvements, DVD 2 and the new film, Bob Dylan 65 Revisited, is probably the main draw of the 65 Tour Deluxe Edition. Pennebaker has gone back into his archives and put together a new compilation of footage that lasts a little over an hour. Revisited is pretty much more of the same, but without the rancor. The emphasis is on performances, as there are quite a few included, and Dylan's interactions with his fans. This new collection of outtakes shows him as far more generous with his audience than one might have gathered from Don't Look Back. There is also a brief appearance by Nico, whose luminous presence even calms the notoriously grouchy Grossman.

As a bookend, Pennebaker includes another take of the film's iconic opening: Dylan running through a set of cue cards with pieces of the lyrics from his song "Subterranean Homesick Blues." The well-known version has Bob in an industrial area with Allen Ginsberg hanging around in the background; this second version has him on a rooftop with tour manager Bob Neuwirth and another record producer Tom Wilson. The wind is blowing, and it looks cold, and it has a certain metaphorical resonance as a capper to Don't Look Back and all of its trappings. Returning to such a popular and significant film could have been a dangerous prospect, looking either like a cursory cash-in or shrinking from the glare of its more famous precursor. Pennebaker beats the odds with Bob Dylan 65 Revisited, employing a slightly different strategy and letting the footage stand on its own. It's a welcome exercise in nostalgia. 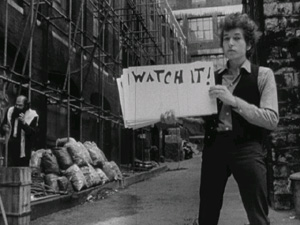 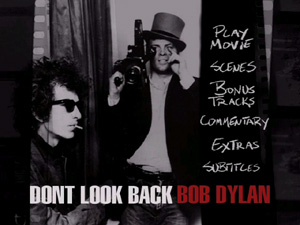 Video:
Don't Look Back is shot in full frame, and as I indicated, this is a brand-new transfer more in tune with current technologies. The first thing I noticed right away when firing up both DVDs simultaneously and jumping back and forth between my two players is that the older version is a lot darker than the new one. Also, the details have gotten crisper, with less soft edges. 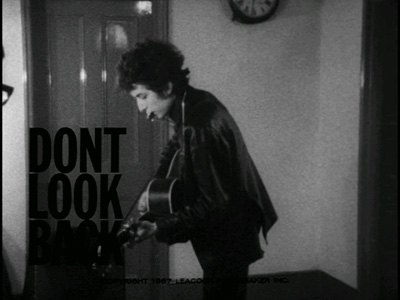 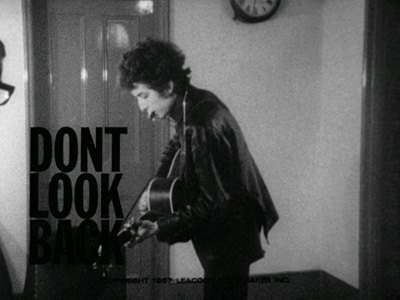 In this second one, notice the framing, too. We're getting a little more picture in 2006. Also, look at the difference in clarity on their hands. 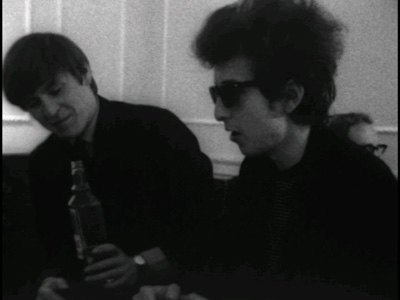 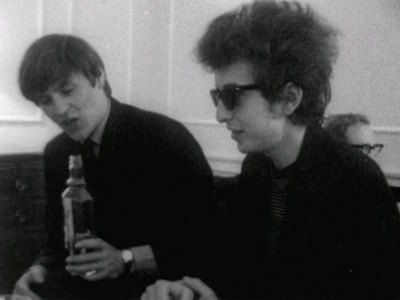 It's still not a perfect print, there are some remaining surface crackles and schmutz, but this is most likely just the nature of the loose filmmaking style and the technology available back then (listen to the Pennebaker commentary for more on his innovations with camera equipment). Occasional graininess is just a byproduct of natural lighting, and usually shows up in very dark seens. All in all, this is probably as good as it's going to get, and I have to say, that ain't bad. I'd also wager that if you could compare the whole of the movies side by side through the entirety of Don't Look Back, even some of those issues have been smoothed out more than one might realize. In fact, in the second scene I took screencaps from, there were more scratches back in 1999, so it makes my wager seem like a lock.

Revisited is of essentially the same quality, with maybe a little more noise. Though, considering this is footage that has been lying around somewhere for 40 years, it's forgivable.

Sound:
For audio there is a pretty standard stereo mix that may not be high-falutin', but I think it maintains the original sound quality of the actual events very well. In keeping with the you're-there-as-it-happens style, for instance, Pennebaker shoots a lot of the performance footage from the side of the stage, using his own microphone and not the soundboard, and so the audio is appropriately cavernous. Also, when doing my scene comparison, I noticed that the new sound has nicer, more clear levels than the 1999 DVD.

There are English subtitles.

Extras:
There are quite a few bonus features to be had from the Bob Dylan: Don't Look Back - 65 Tour Deluxe Edition, both on the DVDs and in the packaging.

All of the extras from the 1999 edition are carried over here. This includes five audio tracks from the 1965 tour, along with information about where they were recorded; the original theatrical trailer; text profiles of Dylan, Pennebaker, and other members of the cast and crew; and another alternate version of "Subterranean Homesick Blues." The big difference between the takes is that the alternate has a more natural backdrop (i.e. a tree) and Dylan is less on top of turning the cards in time to the music. As an added feature, the box set comes with a small flipbook animating the final version of the cue card sequence.

The flipbook rests in a little cubby in the tray under the main disc. The whole package for the 65 Tour Deluxe Edition is really well designed. Printed on cardstock with a matte finish, the three-sided foldable sleeve then slides into a nice slipcase. There are two trays for the DVDs, and a third slot for the second book. This is a reprint of the 1968 companion book to the film. At 168 pages, it is lavishly illustrated with photographs and it contains transcriptions from the movie.

Finally, both film features have commentary from D.A. Pennebaker and the tour's road manager, Bob Neuwirth. For Don't Look Back, it's the commentary from seven years ago, but it's a new track for Bob Dylan 65 Revisited. They make a good duo, trading memories that are both straightforward and full of hindsight. There is a lot of information to share, both about Dylan and about how documentaries were still almost in an embryonic stage, only then starting to get liberated by the onset of new, more portable technology.

FINAL THOUGHTS:
DVD Talk Collector Series. Bob Dylan: Don't Look Back - 65 Tour Deluxe Edition is a remarkable set. For Dylan fans, more general rock fans, or even just documentary fans, there is much in this box to dig into. Even without a new print or audio mix on the main disc, Docurama's set really rounds out an already loaded DVD, but given that the picture and sound are both given boosts, the 65 Tour Deluxe Edition is somethng to shout about. The new film from Pennebaker is a wonderful gift to fans, and the added books are excellent historical documents of an important hallmark in rock 'n' roll cinema. If you only know Bob Dylan now, you owe it to yourself to ignore the title and look back at the man, because there is so much more to see. 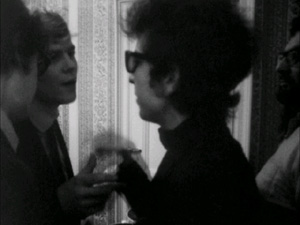 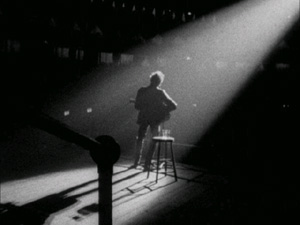