Dynamic: 01 - The Best of DavidLynch.com 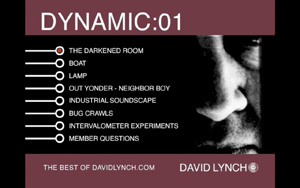 They say Prince has a vast catalogue of unreleased recordings, the result of having a home studio and the ability to work on music any time he wants. I imagine that now that digital technology has made filmmaking more accessible and cheaper, filmmakers like David Lynch can shoot to their heart's content, experimenting and exploring in ways they could not do on expensive film stock. For a director who never stops creating--and works in a variety of media, not just movies--I envision Lynch having scads of unshared nuggets that may never been seen.

Which, if Dynamic: 01 - The Best of Davidlynch.com is anything to judge by, keeping these pieces hidden away might not be such a bad thing. Over the last several years, Lynch has run a paid subscription website where fans could be kept abreast of what the director was up to between movies. This is the first DVD collection of any of that content, and the first chance for those of us who didn't want to spring for the web feed to check out what one of the most unfettered creative minds in modern cinema has been occupying his time with. So, it pains me that Dynamic: 01 doesn't really deliver. For those who thought the sprawling three-hour running time of Inland Empire suggested that Lynch needed to be reined in a little, I'm sorry to report that his exercises in restraint aren't likely going to bring you around..

There are seven programs on Dynamic: 01 - The Best of Davidlynch.com. There is no "play all" function, but each film has its own submenu where you can choose to watch the segment straight away or with video introductions by Lynch. The shorts are as follows: 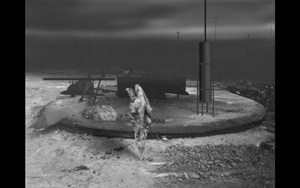 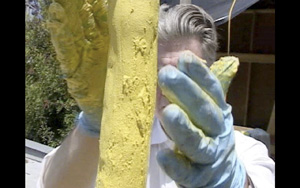 "The Darkened Room" (10 minutes, 30 seconds): After a couple of disjointed intro segments featuring a woman in Tokyo showing the view outside her window and talking about banana consumption, we get what is probably the closest to a standard Lynchian narrative. A crying woman is locked away in the titular room, complete with a ventriloquist dummy on the floor, perhaps the most obvious "surreal" prop conceivable and suggestive of the lowered expectations one must have for this DVD. In some ways, this almost feels like a trial run for Inland Empire, with a woman spirited away in a fashion she does not understand, and the other woman who comes into the room has a hole in her nightgown, an image that comes into play in Lynch's current movie. "The Darkened Room" never really takes off, however. Perhaps there is a concept here, but it never bears fruit.

"Boat" (7:15): A standard little-girl-lost voiceover runs on top of various shots of a boat, before Lynch himself takes the vessel out onto the water to see if he can go fast enough to "enter the night." That's really it. There is no grand entry from day to night. It just gets dark.

"Lamp" (30:40): The alternate title could be "Craft Time with David Lynch," and there could actually be a TV show here. It's probably a little too long, but this is the most interesting and, ironically, thanks to its air of normalcy, the most offbeat offering on Dynamic: 01. We follow Lynch over a day of working on a tall lamp made out of metal and a kind of plaster. Fans will be amused by his numerous coffee breaks. One misstep is the persistent percussive soundtrack, which gets grating over the course of thirty minutes.

"Out Yonder - Neighbor Boy" (9:40): Apparently this is part of a series. Lynch and another actor sit outside and talk in chipmunk voices (again, hearkening to Prince, could this be David Lynch's Camille?). I think they are essentially supposed to be old-timey yokels. The gyst of this segment is that the kid who lives next door keeps coming around for milk, and using rudimentary animation, we see him as a hulking shadow. The main hook of "Out Yonder" is that just about every sentence uses the word "be" or the phrase "be's bein'." As in, I be's bein' watching this, and I be getting bored pretty quickly.

"Industrial Soundscape" (10:30): The explanation in the introduction is more interesting than the ten minutes of cheap animation we get. Lynch scanned a photograph of one of the industrial tanks used in Eraserhead into his computer and animated pieces of it in tune with a sparse, rhythmic soundtrack. A big metal piledriver makes a banging sound, a small rod clicks against the tank, etc., over and over and over for the full duration. This is more like a DVD menu than a DVD feature.

"Bug Crawls" (4:25): More low-level computer animation. A dark shack sits in the center of the screen, as a bug crawls on from the bottom right and a blimp flies across the sky. The bug crawls over the shack, falls off, and the shack's door opens, suggesting something sinister inside. The finale is surprisingly creepy, mostly due to the rather vivid soundtrack.

"Intervalometer Experiments" (13:30): Intervalometer is the fancy term for time-lapse, and these are three scenes of various landscapes recorded over the course of a day, at least one of which contains almost zero movement at all. Of course, it's the longest.

A good portion of these short films come off as an artist getting a new tool and trying it out, which might be interesting were this a demo reel for those tools and not a home video release from a respected film director. I applaud David Lynch for going out on his own to release his own material, exploring new technologies and looking for new avenues to chase his muse, but it seems like these are the things he should be keeping to himself and instead share with us the material he creates after learning his lessons. It's weird to see a journeyman making the equivalent of student films.

Video/Audio:
Dynamic: 01 - The Best of Davidlynch.com is a full-frame presentation, mastered straight from whatever DV source Lynch first used. This means the picture quality is always clear, but its sharpness and the colors vary greatly. There is also only one sound mix, and that too can be real hit and miss. The levels seem off in a lot of the films, with the sound effects and music coming through louder than the spoken dialogue.

Extras:
Lynch answers nine questions from members of his website, ranging from how he approaches writing to working with Marilyn Manson and Roy Orbison. It's fairly interesting, but I'm not sure why David repeats every question out loud immediately after it is asked.

FINAL THOUGHTS:
As much as it pains me to say it, and though I know there are corners of the Lynch fanbase who are going to cry heresy and confiscate my Mulholland Drive DVD, I have no choice but to suggest you Skip It. Dynamic: 01 - The Best of Davidlynch.com has very little to sink your teeth into. It's the cinematic equivalent of watching a kid play with his new toys, and it doesn't take long for the experience to grow dull. If this is the best, I'd hate to see what didn't make the cut. 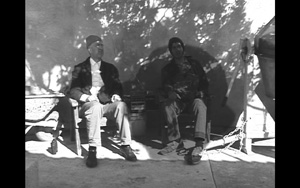 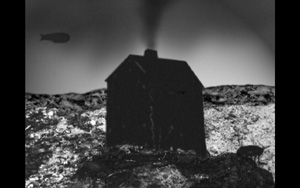