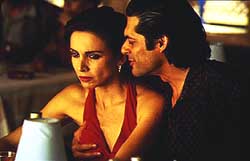 While visiting Turkey with her husband Desideria (Ana Belen) encounters the handsome Yaman (Georges Corraface). After a quick rendezvous Desi is barely able to collect her thoughts-for the first time in her life she has experienced bliss. Unfortunately her trip is soon going to be over. Yet, Yaman vows to love his Spanish worshiper forever and the two part ways.

Back home in Spain Desi can hardly concentrate-her thoughts are with Yaman. After a regular trip to the doctor she is told that there is a baby in her womb. Yet, it is not her husband's child, he is sterile. Desi is ashamed but determined to keep the baby. Knowing that he cold not have been the father Desi's husband is shocked.

Devastated but proud the couple decides to stay together. Unfortunately, Yaman's son dies days after Desi gives birth. With her life in chaos the beautiful Latina heads back to Turkey looking to forget the drama she has left behind. Yaman accepts her but he is no longer the man Desi once met.

Based on the popular novel by Antonio Gala La Pasion Turca a.k.a Turkish Passion (1994) continues Spanish director Vicente Aranda's fascination with the dark side of love. After his scandalous Cambio de Sexo a.k.a I Want to be a Woman (1977) about a sixteen year old boy who uncovers that he is transsexual and the more conventional but impressive Amantes a.k.a Lovers (1991) about a tragic love affair set during Franco's regime Aranda's highly-publicized La Pasion Turca reinforces the director's image as one of Spain's most innovative filmmakers.

Knowing that La Pasion Turca has had its fare share of (outspoken) critics and admirers I would like to explain why I consider it one of Aranda's better films:

First, it is the Spanish director's careful observation of a woman who gradually becomes obsessed with a man who can communicate with her only through sex. The dramatic collapse that occurs in Desi's life is so powerful it shatters everything and everyone that stands between her and Yaman: husband, friends, and family. Her moral degradation, while presumably in love, is filmed perfectly!

Second, it is the surprising turn of events that follows Desi and Yaman's initial meeting. What starts off as a clichéd love affair quickly evolves into a dark tale about humiliation and Aranda has captured every single aspect of it perfectly. Furthermore, what some see as the film's main flaw, Desi's inability to suppress her sexual desire, I see as La Pasion Turca's greatest strength. Piece by piece Yaman destroys Desi (she realizes it) and the transformation she undergoes, from a normal Spanish housewife to a self-admitted puta, is staggering.

Third, it is the manner in which sex is filmed. During the first half of La Pasion Turca Aranda's camera is jolly, delicate, somewhat determined to seduce and make us approve of Desi's infidelity. Then, suddenly sex becomes dark and ugly. Desi's passion is quickly replaced by pain which in return alters the relationship between the two lovers into a visceral game of humiliation.

Winner of the Best Actress Award (Silvia Munt) at the Saint Jordi Awards (1995), Winner of the ADIRCAE Award for Best Performance in a Leading Role (1995), and Winner of Goya Awards for Best Music Score (Jose Nieto) and Best Production Supervision (Jose Luis Escolar) (1995).

Presented in its original aspect ratio of 2.35:1 and enhanced for widescreen TV's La Pasion Turca arrives in a very good transfer that appears to have undergone some restoration work. Colors are vibrant and lush although occasionally a bit unstable, contrast with the exception of a few night scenes is very good, and edge-enhancement is kept at bay. I did notice a few dust specs during the opening 10-20 minutes but these were very minor and clearly without any detrimental effect. Aside from that the progressive anamorphic transfer is quite good and if not for some minor digital noise I would say that it serves the film just right. PAL-encoded, REGION 2.

Presented with a Castellan 5.1 and 2.0 tracks the audio treatment is exceptionally good. The rich music score comes off the speakers very well and the rear channels get some decent workout. Dialog is also extremely easy to follow and I could not detect any issues of concern worthy of discussion. This being noted, the DVD arrives with optional Castellan and English subtitles (white, small, and of excellent quality translation).

La Pasion Turca arrives in a handsome 2DVD SE set where the film appears on disc 1 while all of the extras are on disc 2. Aside from a theatrical trailer, a TV spot, a gallery of deleted scenes (in Spanish only), photo gallery, Making Of (in Spanish only), there is also an alternate ending (also in Spanish only) which reinstates the original ending by Aranda reflecting the manner in which the book La Pasion Turca is based upon ends. Last but not least there are also cast and crew filmographies.