Other // Unrated // October 5, 2005 // Region 2 // PAL
List Price: $27.99 [Buy now and save at Amazon]
Review by Stuart Galbraith IV | posted February 14, 2007 | E-mail the Author
After the worldwide success of Mario Bava's Black Sunday (La Maschera del demonio, 1960), the Italian filmmaker partnered with U.S. distributor American International Pictures (AIP) on several more films, notably Black Sabbath (I Tre volti della paura, 1963) and Planet of the Vampires (Terrore nello spazio, 1965). Undoubtedly the worst film to grow out of this association was Dr. Goldfoot and the Girl Bombs (1966), the unasked-for sequel to the previous year's all-American production of Dr. Goldfoot and the Bikini Machine. Although that alleged sci-fi comedy has been out on DVD since 2001, the MGM label, in its varied incarnations, hasn't exactly been in a hurry to release the sequel. But sado-masochists and Bava completists take heart, a restored special edition DVD of the Italian version, Le Spie vengono dal semifreddo ("The Spies Who Came In from the Semi-Cold") is still available. 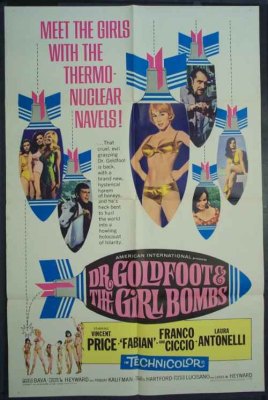 Dr. Goldfoot and the Bikini Machine starred Vincent Price as the Bondian villain of the title, who creates a race of beautiful robot women who playfully cajole lonely men into signing over their assets. He's stopped by Todd Armstrong (not the Columbia contractee; that was the name of the character played by Dwayne Hickman) and Craig Gamble (Frankie Avalon). In Dr. Goldfoot and the Girl Bombs, Vincent Price is back, this time with secret agent Bill Dexter (Fabian) hot on his trail. Now backed by Red China, Goldfoot's plastic beauties seek out the Free World's military leaders to kiss them - at which point they explode.

Dr. Goldfoot and the Bikini Machine was seemingly developed by producer James H. Nicholson as much as a vehicle for new wife Susan Hart as it was to provide product for AIP's undemanding drive-in market. What prompted the sequel - surely audiences weren't clamoring for one - is not known to this reviewer. Whatever the case the Dr. Goldfoot aspects of the story and even Vincent Price himself (to say nothing of Fabian) were incidental to Bava and his Italian audience. There, Le Spie Vengono dal semifreddo was first and foremost a spy spoof for the popular comedy team of Franco Franchi and Ciccio Ingrassia, the Abbott & Costello of Sicily. In the Italian version they get top billing over Price and Fabian, though to the bewilderment of American audiences they dominate AIP's American release version as well. (Beautiful Laura Antonelli also turns up, as Fabian's love interest, as well as her Girl Bomb double.)

The DVD is in Italian with optional English subtitles. Though Price and Fabian are dubbed, one gets a better sense of Franco and Ciccio's style than in the English dubbed version. Even while appreciating the fact that some of their humor, like much of Italian film comedy, involves wordplay (like Abbott & Costello's), to American ears and eyes they still come off as the unfunniest comedy team since Bob Ball and Frankie Ray (of AIP's Invasion of the Star Creatures). Franco, the short one, is like Nathan Lane on speed, contorting his face at every opportunity; his signature bit seems to involve using his forehead muscles to make his hat bob up and down. Ciccio, the Bud Abbott-type, is only slightly more subdued. They appeared in more than a hundred movies together, most made during the 1960s and early-'70s, though they still made appearances together until Franchi death in 1992. (Ingrassia died in 2003.) They spoofed all the popular genres of the day, including several other spy comedies, such as Lucio Fulci's Oh! Those Most Secret Agents (002 agenti segretissimi, 1964), and were apparently quite popular. Whether domestically they were the Italian Hope & Crosby or Leo Gorcey & Huntz Hall is difficult to ascertain, but even subtitled their antics in this film at least are more foolish than funny.

Most of the supposed jokes are of the generic genre parody variety: Price feeding his pet piranhas (oddly, those who fall into his well-stocked swimming pool resurface as bright yellow-green skeletons) and, in typical AIP comedy fashion, there are lots of under-cranked, fast-motion chases. Possibly Franco & Ciccio's usual personae were suppressed or altered so that the sequel wouldn't stylistically veer too far from its predecessor. Much of the humor is stolen, badly, from American comedies: one brief scene has Price and Ingrassia reprising the famous mirror pantomime from the Marx Bros.' Duck Soup, but it's so badly done - not once are the two in synch - that it becomes funny because it's so awful.

Director Mario Bava occasionally directed parts of other films without credit, but his style was so distinctive this uncredited work is usually very easy to spot. Conversely, some of Bava own "official" films are so generic and impersonal that they look almost nothing like a "Mario Bava film," the macaroni Western Roy Colt and Winchester Jack (1970) to cite one example. Dr. Goldfoot and the Girl Bombs might have been directed by Antonio Margheriti for all the film's direction adds. Or, for that matter, Norman Taurog or William Asher.

Though a co-production between AIP and Italian International Film (IFM), the Italian credits on Le Spie vengono dal semifreddo make no mention of AIP or any of its personnel. This reviewer hadn't seen the film in something like 30 years, when it ran once on WXYZ-TV's (Detroit's ABC affiliate) "Four O'Clock Movie" back in the 1970s, so my memories of the American version are more than a little hazy, though the opening credits, with Franco & Ciccio scurrying around optically-enlarged Girl Bombs, seems to have been used only in the 83-minute Italian cut. The 16:9 enhanced image, at 1.77:1 approximating its original 1.85:1 theatrical release, is pleasingly sharp but the color alternates between impressively vivid (original prints by Technicolor Rome) and tepid and somewhat faded. It looks like a composite of different elements, or maybe the film wasn't properly timed, but beyond this the picture looks great. The DVD credits no less than five organizations with its restoration and high definition remastering. The Dolby Digital 2.0 mono is generally fine, and the optional English subtitles are excellent.

The only supplements are a brief photo gallery and a collection of trailers, of which several appear to be home video advertisements rather than theatrical trailers. Include are a 16:9 trailer (probably not theatrical) for Le Spie vengono dal semifreddo (no subtitles), a 16:9 American trailer for Planet of the Vampires, an Italian trailer for Il Medaglione insanguinato (The Night Child), and an international trailer in English for What Have You Done to Solange?

An Italian version of Dr. Goldfoot and the Girl Bombs is, to put it mildly, a special interest title, but one that will appeal to fans of '60s spy spoofs, those fascinated (as I am) with film comedy from other cultures, and for fans of that great stylist Mario Bava. The picture is no high water mark in any of these areas, but in its own perverse way makes for fascinating viewing.