When a Woman Ascends the Stairs: Criterion Collection

The Criterion Collection // Unrated // February 20, 2007
List Price: $39.95 [Buy now and save at Amazon]
Review by Stuart Galbraith IV | posted February 14, 2007 | E-mail the Author
Given the heaps of stylish but often unambitious Japanese genre films that have been released to DVD over the last decade, it's rather appalling that only now are the films of Mikio Naruse beginning to trickle into the western world marketplace. At the end of last year Eureka's "Masters of Cinema" line released a Region 2/PAL format Naruse boxed set consisting of three early postwar titles: Repast (Meshi, 1951), Sound of the Mountain (Yama no oto, 1954), and Flowing (Nagareru, 1956). Meanwhile, in region 1, Criterion is premiering its first Naruse title, When a Woman Ascends the Stairs (Onna ga kaidan wo agaru toki, 1960). Though a letterboxed VHS tape has been in circulation for many years, this new release looks great and offers several worthwhile extras. As esteemed Japanese film and cultural scholar Donald Richie points out in his audio commentary for the film, Naruse in Japan is regarded as an equal of Kurosawa, Ozu, and Mizoguchi but has remained relatively unknown in the west, this despite several international retrospectives. A dozen more DVD releases like this one would certainly change that. 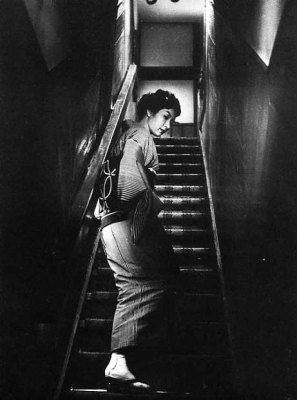 When a Woman Ascends the Stairs is set in the singularly-Asian milieu of the so-called "snack bar." A modern, less expensive though still pricey alternative to a geisha house (which can easily cost the equivalent of $10,000 for a single visit), snack bars still exist in Japan and can be quite entertaining venues if one enters with his eyes open and an understanding of their unwritten protocol. Most snack bars are small, seating perhaps 20 or so customers. Upon entering, male customers are greeted with much enthusiasm by female bar hostesses who will sit with you, flirt with you, laugh at your jokes, and generally hang on your every word with inexhaustible enthusiasm. Beyond one's own drinks and the various appetizers such places offer, customers are generally expected to buy drinks for the women that sit at your table. There's no menu so you're never really sure what your bill's going to come to, though even in a relatively modest snack bar several hours of this sort of entertainment will usually cost the equivalent of several hundred dollars.

For hard-working Japanese men, such places function as a kind of oasis from both the office and the home, and the unwritten rule of snack bars is that sex is simply not part of the equation. Customers accept the flirting as a kind of performance not to be taken literally. The hostesses reap the benefits of their hard work in the form of, among other things, extravagant gifts their wealthiest customers choose to give girls they like, and as in geisha life sex only enters the picture when, sometimes, a hostess will find an actual patron whose financial support might include a sports car or a condominium (to share) and whose relationship might even lead to marriage. (And yes, it works both ways: snacks bars populated by male hostesses serving women have become increasingly popular in recent years.)*

When a Woman Ascends the Stairs is set in Ginza, in the most exclusive of snack bar neighborhoods. Though the picture's focus is Keiko Yashiro (Hideko Takamine), a Mama-san (chief hostess) looking for a way out of hostess life, much of the film is concerned with this unusual social dance, of role-playing, with men manipulating desperate women by dangling before them promises of love, marriage, and material wealth, while the women apply various strategies to get what they want, too. This takes on various forms, all honestly dramatized, from sexpot hostess Junko's (Reiko Dan) playful but blunt requests for money (a million yen, or about $3,500 in 1960 dollars, enough for her to open her own snack bar) to her conquest's (Ganjiro Nakamura) alternately annoyed and amused reaction to her proposition. He knows she's only interested in his money, but he's willing to play along for the performance he'll get out of her, of which sex is only a part.

The casting of girl-next-door type Hideko Takamine as Keiko at first seems an odd choice. The actress Keiko Awaji for instance, who plays Takamine's former co-worker, a hostess who quit to start her own bar (and was soon stealing away Keiko's customers) is much more every Japanese's idea of a typical bar hostess type. But the casting turns out to have been inspired for several reasons. As actor Tatsuya Nakadai, who plays the bar's manager in When a Woman Ascends the Stairs, alludes to in the DVD's featurette, Takamine has the unexpected ability to project an extremely subtle kind of buried nihilism and resignation in her performances for Naruse. She's strong-willed and determined, but also enough of a realist to ultimately accept her lot in life as best as she's able.

Unlike most bar hostesses, who wear the latest, flashy fashions, Keiko wears only subdued traditional kimono, which serve her in a number of ways. First, in traditional dress she retains some sense of self while visually separating herself from the other girls, women who'll all-too-quickly sell out in the name of financial expediency, and as she points out to her scornful mother (Natsuko Nahara), Keiko is able to wear such clothes during the daytime out in the open without advertising her profession, unlike her co-workers. Significantly but unstated, Keiko's clothes (and her occasional open disdain for her job) is an indirect selling point for men attracted to her precisely because she is at once a bar girl that can "pass" for (and in fact is at heart) a traditional Japanese woman.

Ryuzo Kikushima, the co-writer of numerous Kurosawa films as well as pictures like Afraid to Die (Karakaze yaro, 1960) and Hoodlum Soldier (Heitai yakuza, 1965), doesn't limit his rich characterizations to the women; indeed, the various men in Keiko's life prove equally fascinating and varied, from Daisuke Kato's painfully sincere (or so it would seem) obese suitor to Masayuki Mori's much-desired patron, who's honest in his relationship with Keiko only when it's convenient. (And, in a nicely authentic touch, the screenplay takes a darkly humorous attitude toward the men, who flash wads of money at the girls as bait, but are deadbeats when it comes to paying their tabs.)

When a Woman Ascends the Stairs is presented in a 16:9 enhanced transfer that retains the film's original Toho Scope screen shape of about 2.35:1. Naruse and Masao Tamai, his regular DP (he filmed most of Naruse's postwar films...and the 1954 Gojira), were masters of widescreen compositions, so the 'scope ratio is essential. The black and white image is strong despite a couple of brief moments where the fine-grain master positive that was sourced shows some minor damage. Thankfully, Toho and/or Criterion have seen fit to decode the film's original 3.0 Perspecta Stereophonic Sound mix, though it doesn't offer much in the way of directionality. (Toho gradually lost interest in the process, a shame since their earliest Perspecta titles, such as their very first Perspecta and Toho Scope release, the charming musical comedy On Wings of Love (1957), were often very showy audio-wise. A standard release 1.0 mono track is also offered.

The English subtitles are generally excellent, though one wishes Criterion would either onscreen or in its booklet provide complete lists of their titles' casts and crews. When a Woman Ascends the Stairs, for instance, abounds in familiar faces not identified either in the booklet or the subtitles. Beyond the ten actors listed in the booklet, sharp-eyed viewers will spot such familiar as Yu Fujiki (The Lower Depths, Atragon), Chieko Nakakita (One Wonderful Sunday), Kin Sugai (Ikiru, The Funeral), Yutaka Sada (High and Low), and Akiko Wakabayashi (You Only Live Twice).

Supplements include another excellent audio commentary by Donald Richie that explores in detail and with great astuteness the filmmaking choices Naruse makes from scene-to-scene, Naruse's relationships with actors and other collaborators, and he puts the film into cultural and cinematic perspective. It's a relaxed but densely-packed treasure trove of information and observations.

Also included is a 16:9 enhanced trailer that does a good job selling the film but gives away the climax. A New Video Interview with Tatsuya Nakadai, running 13 minutes and also 16:9 enhanced, is full of pointed observations by the noted actor, who compares Naruse's working methods to other filmmakers like Kurosawa and Kinoshita, and how actress Takemine taught him many of the basics of film acting. It's a charming and informative interview.

A 36-page booklet includes "They Endure," an essay by critic Phillip Lopate, and "Diary of a Ginza Bar Hostess," by Catherine Russell, reprinted from The Cinema of Naruse Mikio: Women and Japanese Modernity. Both are literary-type readings/overviews, with the latter particularly insightful. Audie Bock's "The Essential Naruse" puts the filmmaker into historical perspective, while "About Mikio Naruse," written by Hideko Takamine, is disarmingly moving.

When a Woman Ascends the Stairs isn't so much Naruse's masterpiece as it is a culmination of concerns and assured virtuosity. It offers a subtle and economical but searing portrait of postwar Japanese life. It's also a kind of intimate exposé, one that's as unflinchingly honest as it is a beautifully structured and acted by its players, and it's a must-have DVD Talk Collector Series title.

* Watching When a Woman Ascends the Stairs today, what strikes viewers most about the snack bars of 1960 is that they predate the proliferation of karaoke. Where snack bars today are often loud and noisy with drunken Japanese singing "My Way," back then hostesses had to rely much more on personal interaction and conversational skills.