Soup of the Day 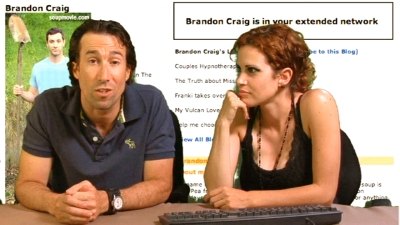 As one of the three remaining computer-savvy Americans without a MySpace page, I really didn't think Scott Zakarin and Rob Cesternino's Soup of the Day (2006) would be up my alley. Dubbed "audience empowered relationship entertainment" by director Zakarin, this episodic tale of a guy and his three girlfriends sounds like fodder reserved for the Blind Date crowd...on paper, at least. It's actually a loosely-scripted, experimental project that built itself quite a fanbase as the story unfolded, much to the credit of the creative cast and crew.

The 9 million visitors to SoupMovie.com should already be familiar with the raw details. For everyone else: Brandon Craig (Jon Crowley) is the charismatic hero of our story, but he's made the mistake of committing himself to three separate women...without them knowing, of course. Monique (Catherine Reitman, daughter of producer Ivan) is his photographer boss, Wendy (Patty Wortham) is an undercover cop, while Franki (Tina Molina) is the popular host of the video blog Missleblast (a parody of real-life Rocketboom). In addition to their favorable traits, though, each woman potentially has a different way of affecting Brandon if their ties are severed: Monique will obviously hurt his career, Wendy could probably beat him up, while Franki's clinginess shows hints of self-destructive behavior.

On the surface, Soup of the Day might show hints of misogyny---but to the credit of the cast and crew, this unusual (and seemingly unfair) comedy remains likeable throughout. But that's not the real kicker: the 100% fictional Soup of the Day was originally released online in episodic format (complete with a MySpace page for Brandon), giving viewers the impression that his situation was real...and he was seeking advice for what to do next. Using reader feedback as litmus paper, this "choose your own adventure" hinted that our hero would finally bite the bullet and make his decision. During the 19 original "webisodes", we follow Brandon, Monique, Wendy and Franki through their relationships, all the way to a conclusion more open-ended than originally planned. It's a unique premise executed with skill---and though it's not without a few bumps along the way, Soup of the Day earns plenty of points for creativity.

Presented on DVD by Echo Bridge Entertainment, this episodic tale is presented in two different ways: as the original webisodes (on Disc 2), or as a newly-edited feature film. The latter trims roughly 20 minutes of content to make everything flow more smoothly, but it's great to know that both formats have been preserved. Additionally, there's a solid amount of bonus material on board; most of it features Zakarin and Cesternino, whose separate work on "The Spot" (the Internet's first episodic series, circa 1995) and TV's Survivor ensures that the reality-style story flows well. It's not a perfect concoction, but Soup of the Day is entertaining, fun and lightweight enough to satisfy fans of the genre.

Presented in its original 1.78:1 aspect ratio and enhanced for widescreen displays, Soup of the Day looks quite good from start to finish. Shot entirely on high-def digital video, most of the natural lighting conditions hold up fairly well. A few of the brighter indoor scenes look a bit washed-out, but the color palette is balanced and black levels are typically solid. Digital problems---including edge enhancement, pixellation and the like---don't appear to be an issue here, helping the film's look defy its modest budget. Overall, it's really tough to complain.

The audio mix is presented in 2.0 Surround, but it's not as if this dialogue-driven film requires an overly active soundstage. Small portions of the audio sound a bit rough on the high end, but most everything comes through clean and clear. No optional subtitles are included, though the main feature includes Closed Captioning support. 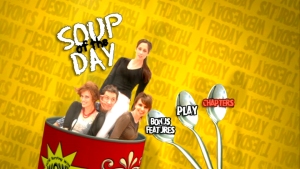 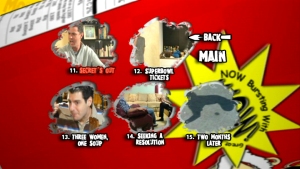 Seen above, the animated menu designs are basic and easy to navigate. The 93-minute main feature has been divided into 15 chapters, while no obvious layer change was detected during playback. This two-disc release is housed in a standard black hinged keepcase and includes no inserts of any kind.

Bonus Features
First up on Disc 1 is a feature-length Audio Commentary with writer/director Scott Zakarin and writer/producer Rob Cesternino (below left); though the lack of cast input seems odd, both participants provide a casual, frank commentary that fans should enjoy. This partners well with "Behind the Soup" (34:40), a well constructed making-of documentary about the film's origins and production. Featuring additional comments from Zakarin and Cesternino, along with plenty of behind-the-scenes footage (including a handful of audition clips and table reads), this featurette provides a solid overview of the audience-driven project. Overall, they're both certainly worth watching.

Also included is Audition Footage of Jon Crowley, Catherine Reitman, Patty Wortham and Tina Molina (4 clips, 20:25 total), as well as a collection of Bloopers (6:57) and a few Deleted Scenes (7:16); the latter even includes an alternate ending right up front. We also get few standard and in-character Interviews with Jon Crowley & Catherine Reitman (13:30), Detectives Kozlowski & Ferrari (4:48), Franki (2:22) and the two Missleblast producers (4:35). Some of it seems a bit self-indulgent, but the additional footage is nice to have anyway. 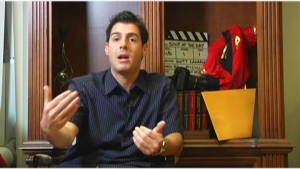 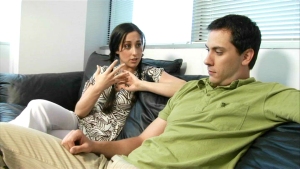 Disc 2 is home to all 19 original Soup of the Day Webisodes (1:52:53 total, above right), which stand in mild contrast to the "finished film". For those who were first introduced to Soup of the Day in this episodic format, you'll be glad to know it's been preserved; for those new to the project entirely (and who viewed Disc 1 first, as I have), it'll seem a bit padded in comparison. The following comments are written from this perspective, so your mileage may vary.

For the most part, the differences are minor but noticeable. Opening title cards have been included for each episode, while a few minor scenes (trimmed from the "final" version) give some additional face time to several supporting characters. The last episode also lacks the coda seen on Disc 1 (apparently shot a few months after the original wrap), giving the story a more open-ended feel. A few music cues have also been shuffled around, but that's obviously because of the drastic change in presentation. To their credit, these easily-digested "short films" stand up well on their own, but the more streamlined Disc 1 version tells a more efficient story. One final note: the nudity has been carefully glossed over, but the foul language appears to be intact. Cussing good, boobies bad.

All widescreen bonus features have been anamorphically enhanced (including the webisodes), ensuring that the content looks as good as possible on a limited budget. Most major studios don't bother with "little details" like this, but it's a nice touch that earns Soup of the Day a few bonus points.

It's not the most thought-provoking independent film you'll ever see, but Soup of the Day is a promising effort that plays its cards right. Nearly all of the key players turn in respectable performances, while the unorthodox story stays anchored by plenty of laughs. The final cut of the film (presented on Disc 1) is the most efficient version, but those who enjoyed the original "webisodes" will be pleased to have them on board as well. If that weren't enough, Echo Bridge Entertainment's two-disc package includes plenty of behind-the-scenes material that fans should enjoy. All things considered, Soup of the Day is a solid release with plenty of bang for the buck. Recommended.