22 year-old Sebastien is hired to repair the collapsed roof of an old and grubby house. Unfortunately the owner of the house od's but not before Sebastien overhears a conversation where a lot of money are being mentioned. Buzzed and with plenty of ideas in his head the construction worker follows a lead that will take him to a mysterious manor somewhere in the French countryside. There Sebastien will become part of a deadly game where people would bet their lives for money.

Shot in cold black and white Gela Babluani's 13 Tzameti (2005) is a film both fascinating to behold and at the same time incredibly painful to endure. Not because the story lacks coherence but simply because there isn't any time for the audience to take a breather! Pain and anger are mixed in an intoxicating collage of images where the director's camera is practically flawless. More importantly the visuals are downright nasty forcing the viewer to gasp in disbelief.

At least such is the effect George Babluani's (Sebastien) performance had on me. I could barely handle the heavy pressure oozing from the screen - from the shocking realization of what was being done to seeing the emotions running through the faces of the players 13 Tzameti proved to be a grand ball of psychosomatic masochism.

The fierce assault on the senses which Babulani and his team deliver however is implacably well done. Stripped of excessive glamour the picture remains exceptionally well-paced forcing even the most vocal of critics to remain silent. 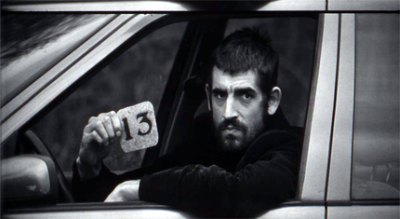 If there is anything that 13 Tzameti does not manage quite that well it is the eerie aura reigning during the first half of the film, the script fails to sustain it. As the story progresses the shadow characters surrounding Sebastien become more and more transparent until their candid perversity eventually destroys the Hitchcockian enigma from the opening scenes.

Nevertheless the lack of flashy camera moves, clichéd dialog, or a prudish finale transforms this Georgian-French production into one of the most impressive debuts I have seen in a very long time. Not surprisingly in 2005 13 Tzameti received the coveted Luigi De Laurentis Award at the Venice International Film Festival. 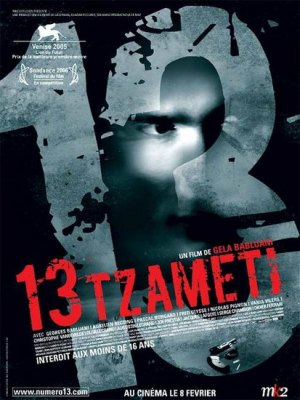 Presented in its original aspect ratio of 2.35:1 and enhanced for widescreen TV's the film print provided by Palm Pictures is practically flawless. Astonishing black and white color gradation (and I truly mean it, blown through a digital projector this disc looks absolutely fabulous), an impeccable contrast, and not even a tiny speck of dirt transform this release into one of the great surprises this early into 2007. The progressive, properly converted print, is of near HD-quality!! Looking at the information preceding the main feature it appears that Palm Pictures have borrowed the print used by MK2 for the R2 release and all that I could say is: BRAVO! Whatever team worked on this release they deserve every bit of credit that is there to give! What an outstanding job!!

Presented with a 5.1 French mix the audio for this release is just as impressive as the video presentation. Extremely easy to follow dialog, great rear channels separation, very delicate use of silence (the moments before the bulb flashes are incredibly strong) is what you will encounter here. For the record I also switched my system half-way through the film to listen to the 2.0 mix and it is equally impressive. I have absolutely no issues with this disc whatsoever. With optional English subtitles (perhaps the subtitles should be a tiny bit smaller).

Palm Pictures have loaded this disc with extras and all of them are excellent!! First, there is a gallery of deleted scenes, a total of six, with optional English subtitles, pertaining to Sebastien's actions before, during, and after his dealings with the betters. Quite frankly, having seen the film, I believe that there was a good reason why these were left on the cutting floor. Some of them are too revealing and the film works substantially better as it is. Next, there is a very interesting segment titled "Testimony of a Survivor" where apparently a real player shares his thoughts about the game and those who support it. To put it mildly the man's revelations are mind-boggling. Next, there is a great section titled" Designer Contest" which proves how serious Palm Pictures are about their work. Here, you will see different cover designs that fans of the film submitted to the company for the DVD's final artwork. Needless to say what you see as the official cover for this DVD was done by a fan. Next, there are three interviews: one with the director of the film Gela Babluani where he talks about his life as an immigrant in France, his passion for cinema, and what 13 Tzameti represents, an interview with Aurelien Recoing (Player 6) who also shares his thoughts on the film as well as his fears from the shooting sets, and finally there is an interview with Gela Babluani. The surprise of the disc is a short film by Gene Laufenberg titled "The Sunday Game" (which is also described as a "darkly-comic short about five elderly women and their unique weekend tradition"). Finally, there are two theatrical trailers: the original French one and the North American trailer used by Palm Pictures.

13 Tzameti is a shocking film which must be seen, it can not be described in simple words! Stunning!! Equally impressive however is the presentation by Palm Pictures!! While 13 Tzameti may be arriving rather late in the US the wait was well worth it. This R1 DVD is practically flawless. From the impeccable presentation, to the excellent extras, to the spectacular design Palm Pictures have provided this is one great package worthy of our DVDTALK Collector Series!