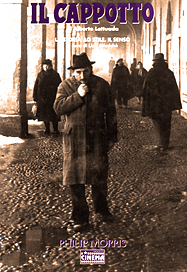 Carmine De Carmine (Renato Rascel) is in a dire need of a new coat. Yet, he can hardly afford one. Luckily he meets a tailor who agrees to help him...for a decent price! De Carmine is delighted and without thinking much quickly spends all of his savings on a new and stylish overcoat.

At work everyone is surprised - the once shy and timid clerk now looks like a man ready to take on the world. During a New Year's party at the mansion of the Secretary General De Carmine makes a bold move and invites the host's wife to dance with him. Life seems perfect! Unfortunately at the end of the night the unthinkable happens - a thief steals De Carmine's precious overcoat!

Based on the classic novel by Nikolai Vasilevic Gogol Il Cappotto a.k.a The Overcoat (1952) is arguably Italian director Alberto Lattuada's most successful work. An interesting experiment of fractured story-telling where fantasy and reality are masterfully intertwined Il Cappotto appears quite different from the majority of Italian films created at the time. In fact, Lattuada's work can not be easily attached to the neo-realistic movement where De Sicca, Rossellini, De Santis, and Zavattini among others felt at home.

The presence of De Carmine's ghost creating havoc amongst pedestrians is indeed one of the key scenes in Il Cappotto that makes this film unusual. Renato Rascel's character undergoes a dramatic transformation which leaves the audience wondering about the city clerk's true personality. The happy man from the first half of the film whose gestures and mimicking seem astoundingly similar to those of Charlie Chaplin are abruptly replaced by the angry but defeated look of a ghost with an agenda (there is quite a bit of irony here). Still, Lattuada's camera continues to emphasize comedy over drama.

The effect this unusual directorial approach has on Il Cappotto's pacing is unexpected. The balanced and upbeat story from the opening scenes evolves into a depressing and dreamy quest of images where De Carmine begins to question his past. The pivotal point in Il Cappotto, the moment when the city clerk realizes that his overcoat has been stolen, is also where Lattuada veers off in a much darker territory – De Carmine dies and so does the upbeat spirit of the film.

Il Cappotto most certainly would not have been such an enormous success if not for Renato Rascel's performance. Like Chaplin's slouchy shoulders, swinging cane, and a face capable of revealing hundreds of emotions Rascel's body language is unforgettable! The difficult relationship De Carmine has with the world is indeed somewhat of a truthful reflection of the state he belongs to: beautiful on the outside, unpredictable and often controversial on the inside.

Winner of the Silver Ribbon Award for Best Actor (Renato Rascel) granted by the Italian National Syndicate of Film Journalists (1953). Nominated for the Grand Jury Prize at the Cannes Film Festival in 1952.

Presented in its original aspect ratio of 1.33:1 Il Cappotto arrives as part of the Italian Minerva Classic Series and as expected the print provided by the Italian distribs is in very good condition. It is obvious that some extensive restoration work has been performed as the smooth image is quite impressive. Dots, scratches, and debris have been removed and the film's beautiful cinematography can be fully appreciated. Furthermore, contrast is also handled very well (I must note that the softness during the night scenes is indeed intended) while the color-scheme (black and white) remains accurate. Edge-enhancement is not an issue here and blown through a digital projector the film remains noticeably steady. PAL-encoded, Region 2.

Presented with its original Italian mono track the film sounds very good. The audio also appears to have undergone some extensive restoration work and as a result the dialog is crisp and very easy to follow. There were no disturbing pop-ups or hissing that I could detect. This being said the Italian producers have provided the option of navigating the menu system through an entirely English-friendly interface. With optional Italian and English (white, decent font subtitles).

First of all there is an unsubbed in English commentary by F. D. Bernardini. Next, there is an interview with critic Angelo Pasquini where he talks about the film and particularly the final segment and its "gothic" aura. The analysis by Mr. Pasquini is quite interesting as it provides a different angle to the way Gogol's story is adapted (some notable comparisons between the Russian original story and the Italian version). The interview is subbed in English. Next, there is a short gallery of deleted scenes (without audio). Finally, there is a segment titled "Difference between screenplay and final cut" where additional footage is being offered showcasing the cuts made by Lattuada.

It must be noted that this Italian disc by Minerva arrives, as expected, with a massive booklet full of essays presented entirely in English.

What a delightful film!! And what a great performance by Renato Rascel!! The Minerva Classic Series truly have become one of my all time-favorites. Focusing on great Italian classic films, restored and in superb condition, these are discs that are exceptionally well produced. With stylish designs and excellent extras, including great essays in the booklets, I consider the Minerva DVDs an outstanding addition for every serious film buff's library.