A lonely chef-turned-assassin (Kyoji, Asano Tadanobu) must eliminate the wife of his boss. He does and shortly after moves from Hong Kong to Thailand. In the meantime it becomes obvious that before the job the assassin has been serving not only his boss but his wife as well. In Thailand a second assassin (Mitsuishi Ken) is sent to eliminate the first assassin. After a strange game of empty words the two men face each other in a decisive showdown.

Pen-Ek Ratanaurang's (Last Life In The Universe) much talked-about follow up Invisible Waves (2006) is a strange hybrid of a film. Mixing noir with romance and drama with thriller this Dutch-South Korean-Thai-Hong Kong project is quite possibly one of the most dissatisfying yet beautiful to behold films I have seen in some time. Assisted by top cinematographer Christopher Boyle (2046) Thai director Ratanaurang certainly had a great platform to build upon yet his picture is neither entertaining nor thought-provoking! It is trivial!!

Bleak, slow, with large blocks of silence occasionally disrupted by hooky ambient sounds Invisible Waves attempts to convince its viewers that style does not always have to be teamed up with substance when it comes to creating memorable cinema. By all means Ratanurang's latest picture proves precisely the opposite. Here's why:

First, it is the poor decision to film fragments of Invisible Waves entirely in English even though the lead actors aren't native English speakers. Some may find this too picky of an argument to dismiss an entire film but having seen the final product delivered by Ratanaurang I strongly disagree. The static dialog affects the fluidity of the film to such an extent that frankly it is too painful to watch the actors struggle with what they obviously do not comprehend, let alone follow the story.

Second, it is the use of silence and particularly the manner in which it is being applied in Invisible Waves to exacerbate the importance of guilt. There are great examples in modern cinema where silence could be a powerful ally to a director who knows how and where to use it (Ratanaurang's own Last Life In The Universe is a good example, Gus Van Sant's Gerry is a great one). Here the use of silence comes off as a pretentious and senseless addition to a plot that already has too many loopholes to begin with - Kyoji's pointless wandering throughout the film is just what the viewer initially assumes it is...a pointless wandering.

Third, a lackluster finale that destroys even the little Invisible Waves gets right. Rushed, unfocused, and incapable of linking together the missing fragments of the enigma surrounding Kyoji Ratanaurang provides little to explain why so much headache was needed to tell so little. Frankly I found myself rather more intrigued by the moody soundtrack by Hualampong Riddim than Ratanaurang's noir-copycat. 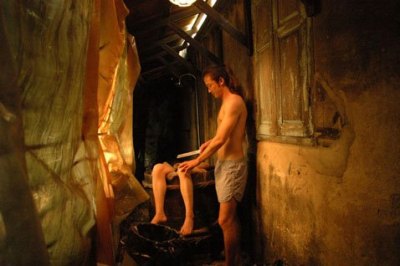 Presented in its original aspect ratio of 1.85:1 and enhanced for widescreen TV's the print provided by Panorama Distribution is solid. Excellent contrast, great degree of detail, convincing color-scheme, and lack of any damage that I can detect, provide the film with just what you would expect: a deserving presentation. My only complaint with this disc is the sporadic appearance of minor digital noise which should be mostly noticeable on larger TV screens.

Presented with two different tracks a 2.0 and 5.1 mixes (mixed English, Thai, Japanese, Korean) and optional English and Chinese subtitles the audio is indeed on par with the video presentation. The actors' speech is crystal clear and silence is indeed well addressed: the ambient aura of the film is quite well handled. I don't have any reservations here other than perhaps the lack of English subtitles for the portions of the film where the actors speak in English.

There are absolutely no extras to be found on this DVD release.

It isn't difficult to tell what went wrong in Invisible Waves and for what reason. From the very first scene the film falls apart in areas where it should have excelled. Acting, direction, and cinematography head in completely different directions leaving the viewer wishing but incapable of liking what takes place on the screen. It is rather unfortunate indeed as Ratanaurang is a talented director whose vision for beauty I find fascinating.