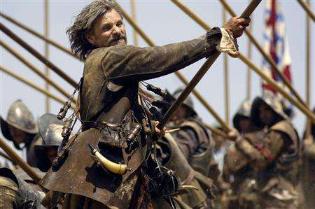 The most expensive Spanish production to date, director Agustin Diaz Yanes' Alatriste (2006), certainly is a film to consider seriously. For a number of reasons!

Toping off an astronomical for the Spanish film industry budget of 28 million and teaming up every major Iberian actor you could think of next to sizzling American superstar Viggo Mortensen (The Lord of the Rings) Alatriste is a massive spectacle with top-notch production values.

Set in early 17th century this gritty buccaneer saga follows the life of legendary hero Captain Alatriste as described in the writings of Arturo Perez-Reverte.

The film opens up with a nasty ambush scene off the coast of Flandria (Flanders) where Alatriste saves the life of the Duke of Guadalmedina (Eduardo Noriega) with fellow warrior Balboa (Alex O'Dogherty). Alatriste's old friend however is fatally wounded. Before he dies he asks if the Captain would raise his son Inigo (Nacho Perez).

In Spain Alatriste and the famous Italian mercenary Malatesta (Enrico Lo Verso) are paid to eliminate a mysterious duo of high-ranking visitors. When he refuses the Captain becomes a target for the merciless Bocanegra (Blanca Portillo) whose prominent role within the Inquisition creates plenty of problems.

To punish his disobedience the Count-Duke of Olivares (Javier Camara) sends Alatriste back to Flanders where the Spanish army is under siege. 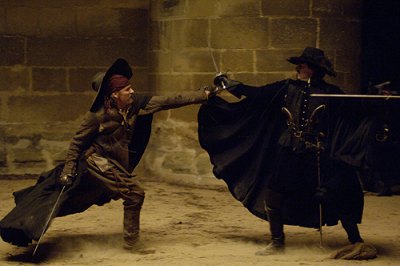 It is difficult not to like what Agustin Diaz Yanes has created! Visually stunning and thematically well-sustained Alatriste delves deep into Spanish history and gets most everything right. The story relies on a excellent cast which as mentioned already gathers the crème de la crème of Spanish cinema.

The most curious figure in the film is of course American actor Viggo Mortensen who not only speaks fluent Spanish but sounds very impressive as well. I am not aware how Spanish audiences accepted his performance but as far as I am concerned Alatriste will have a great resonance amongst foreign film aficionados.

What truly transforms Alatriste into a great cinematic experience however is the near perfect balance between edge-of-your-seat action and convincing storytelling. The gritty battle scenes where special effects are plausibly ignored in favor of authentic action are simply outstanding (special accolades go to costume designer Francesca Sartori)! The story is built around superb characters whose many sides are revealed in a fashion Hollywood can only wish for!! 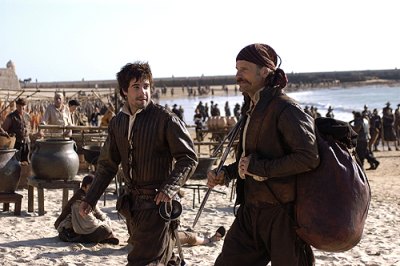 If there is anything that might partially frustrate foreign viewers unfamiliar with Spanish history it is perhaps the enormous emphasis Agustin Diaz Yanes and his cast have put on detail. Alatriste often combines an array of characters with unique stories that seem to overlap each other making it impossible for the viewer to keep track of the numerous events taking place on the screen. Regardless, this is one exceptionally well done production that will make fans of intelligent, in-your-face action, adventure-sagas very happy! 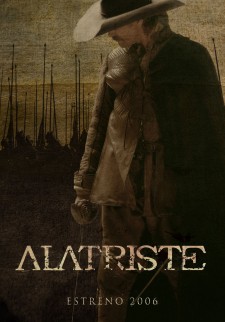 Presented in its original aspect ratio of 1.85:1 and enhanced for widescreen TV's this Spanish-produced disc is near perfect! Crystal-clear image, incredible contrast, excellent color-reproduction, and a print that is virtually impossible to critique is what we have here. The anamorphic image is so strong that I felt like I could have used screen-caps from it all day long to produce nice wallpapers! Fox-Spain, the producers of this marvelous set, have indeed outdone themselves. Really, this disc is for those who wish to have a show-off DVD any time a friend comes over to visit. Impeccable!!!

In addition to the marvelous picture quality Fox have provided an equally stunning audio treatment! Presented with Catalan 2.0 and 5.1 tracks and a bombastic DTS mix the disc is what an audio-snob would hope for: a winner! I played with the 5.1 a bit but quickly switched to the DTS track once Alatriste was sent to Flanders. The action scenes, you have to believe me, are absolutely mind-blowing. There aren't any special effects here to truly give your system a workout but the natural sounds from the battle scenes are pure perfection. I enjoyed every single minute of this film and then some!! With optional yellow Catalan and English subtitles (my only gripe here is that the subs are a bit large for my taste...). PAL-encoded, Region-2.

Since all of the extras on this 2DVD set are only in Spanish I am going to list them without making any comments. On disc one there is a commentary by the director of the film as well as the original theatrical trailer. On disc two you will find a great documentary by the National Geographic titled "El Madrid de Alatriste", the documentary "Cuenta lo que Fuimos", a gallery of stills, a gallery of deleted scenes, a Making-Of, and promotional gallery of trailers, TV spots, and press announcements.

You can certainly place me in the camp of those who had doubts that Viggo Mortensen could be a Spanish bushwhacker. And now you can take me right out of that camp and place me in the distant WOW-camp!! I have been wrong!!
I enjoyed Alatriste so much I saw it twice in one day, which is quite a gig as the film runs at approximately 150 minutes, and will likely see it again in a near future. The story, the acting, the music, the cinematography are all top-notch. Just what I did NOT expect!! Yes, there are a few minor flaws but this is indeed a grand spectacle!!!