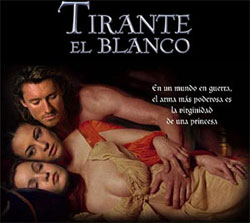 The Emperor of Byzantium calls on the legendary Tirante a.k.a White Knight to free Constantinople from the Turks.

Tirante (Casper Zafer) gathers a massive army of soldiers and drives the hordes of Turks away from the city. During a lavish ceremony organized by the Emperor (Giancarlo Giannini) Tirante sees the beautiful Carmesina (Esther Nubiola) and immediately falls in love with her. But the object of his desire is unwilling to share his love. Carmesina wishes to remain a virgin.

Spanish director Vicente Aranda's most recent picture Tirante el Blanco a.k.a The White Knight (2006) is a curious but ultimately disappointing take on the famous 15th century novel by Joanot Martorell. Curious because it certainly teams up some high-profile Spanish actors (Leonor Watling, Victoria Abril, Ingrid Rubio, etc) with impressive resumes! Disappointing because the picture suffers from a number of clichés that could have and should have been addressed better by the man behind the camera!!

The most obvious flaw with this film is undoubtedly the decision to have all actors speak their lines in English (the cast consists of Spanish, Italian, British, and American actors) even though for many English is a second language. Logically for the less experienced ones this proved to be a major obstacle as during key scenes it is rather easy to detect that some of the principals were unaware of what was required from them. The result as you could easily guess is a film where chemistry is lacking!

Furthermore, Casper Zafer is without a doubt miscast as Tirante as neither his acting nor his presence match the seductive powers of Leonor Watling and Esther Nubiola. In fact, the two Spanish actresses are so visibly superior to Zafer that instead of being manipulated, as the story dictates, they become manipulators! Not surprisingly even during the numerous sex scenes the White Knight looks defeated!!

Where Tirante el Blanco partially redeems itself is the gorgeous settings and utterly impressive costumes. Aranda quickly lost my interest with the story but Yvonne Blake's (Goya's Ghosts) masterful touch kept me perplexed. The beautiful settings, the lavish decors, the fascinating dresses, everything Yvonne Blake was involved with screams perfection. No doubt, with the right script and crew she will produce miracles.

Unfortunately, the beautiful vistas from Tirante el Blanco are hardly a good enough reason to tolerate the numerous flaws the picture reveals. To make things even worse the strong but overpolished eroticism oozing from the final scenes is indeed more suitable for a cable skin-extravaganza than a period drama inspired by a classic novel.

In 2006 the film was nominated for Best Art Direction and Best Cinematography at the Barcelona Film Awards.

Presented in its original aspect ratio of 2.35:1 (actually closer to 2.31:1) and enhanced for widescreen TVs the film looks very good. Colors are lush and convincing, contrast is very well-handled, and edge-enhancement is practically not an issue here. There isn't any print damage to be reported either although I noticed a few very minor specks in during the opening credits. Overall, a good print that will certainly meet the requirements of those of you with more sophisticated home set-ups. PAL-encoded, Region 2.

As mentioned in the review the film was shot in English. The DVD comes with three different audio tracks: a Spanish, Castellan, and English 5.1 mixes. As far as I am concerned there aren't any issues here to report. Dialog was very easy to follow and the beautiful soundtrack to the film was immaculately handled: plenty of activity in the rears with great separation of the main channels. I could not detect any disturbing audio drop-outs or hissing. With optional Castellan subtitles.

Aside from a gallery of trailers for other upcoming releases this disc contains filmographies for the main cast and the director.

I am a big fan of Aranda's work but similar to his Juana la Loca a.k.a Mad Love (2001) I had a very difficult time absorbing this picture. Both Lenor Watling and Esther Nubiola are a good enough reason to see Tirante el Blanco but I must admit that a part of me was not convinced this is the best Aranda and his producers were capable of!