Home Vision Entertainment // Unrated // April 10, 2007
List Price: $26.99 [Buy now and save at Amazon]
Review by Stuart Galbraith IV | posted April 21, 2007 | E-mail the Author
Ten years ago Dana Ranga's delightful documentary East Side Story told the fascinating, hilarious, and disarming story of Iron Curtain musicals, films that superficially resembled the great Hollywood musicals of the 1940s and '50s, but which instead extolled the virtues of collective farming and Soviet-style communism. Yang Ting Yuen's Yang Ban Xi: The 8 Model Works (Yang Ban Xi, de 8 modelwerken , 2005), a Dutch production in Mandarin, does much the same in its examination of Chinese musicals made during the Cultural Revolution, movies personally supervised by Madame Mao herself. 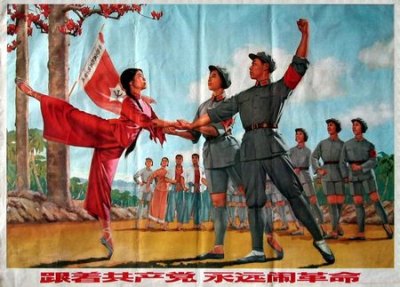 In the 1960s, Jiang Qing, the wife of Mao Zedong and a former actress and film star in the 1930s, assumed complete control of the arts, banning most forms of creative expression including Beijing Opera. As Deputy Director of the Cultural Revolution, in its place she commissioned a series of new musical operas and ballets performed on the stage and adapted into films called "Yang Ban Xi" ("model operas"), produced using the best artists of the day. The film versions, with titles like Red Women's Detachment, Taking Tiger Mountain by Strategy, and The White-Haired Girl, are all aggressively propagandistic, with ballet dancers and Beijing Opera-style performers dressed in military garb, singing songs glorifying Mao Zedong as China's savior.

Yang Ban Xi includes clips from the three aforementioned titles; all are in color, full-frame, and appear to have been shot almost entirely on Beijing soundstages featuring elaborate painted backdrops. The clips have a certain camp value -- on one hand they resemble, say, the Fox musicals of the 1940s, but the content is surreally different. Several seem to be set during the Ten Year Civil War of 1927-37, and feature musical numbers with names like "Rifle Drill of the Detachment Members" and "Seven-Inch Dagger Dance of the Red Guards." In one especially memorable clip, revolutionaries merrily sing and dance while beating and eventually executing a landlord who had overcharged his tenants.

And yet, as writer-director Yang Ting Yuen makes clear, for various reasons these films unexpectedly remain popular in China even today. Partly this is due to the fact that it was virtually the only entertainment in China during 1966-76 so, like its message or not, Yang Ban Xi became engrained in the public consciousness. (Rather like The Brady Bunch did in its incessant UHF reruns in '70s America.) Nevertheless, and in spite of the often ludicrous sight of gun-toting ballet dancers and the like, the films were colorful and exciting, and their scores especially were extremely good, modern day classics, in fact. 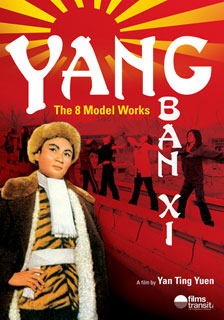 Besides the clips, the heart of the film is its interviews with seven men and women: Xue Qing Hua, 59, a ballet dancer who starred in Red Women's Detachment, and her husband, Chen Ping, 58, a property developer; Tong Xiang Ling, 70, an actor who starred in Taking Tiger Mountain by Strategy, and his wife, Zhang Nan Yun, 69, an ex-opera actress; Jin Yong Qin, 62, a screenwriter; Huang Xiao Tong, 68, a conductor, and his nephew, Zhao Wei, a rock guitarist; and Xu Yi Hui, 39, an artist and fan of the films.

The seven interviewees try to explain the appeal and enduring popularity of these films, the degree in which they contrast China's present economic boom and capitalist flirtations, how they struggled to find creative fulfillment within the strict guidelines of Yang Ban Xi and, most importantly, how their lives were impacted when the political pendulum swung in and out of the Cultural Revolution. Zhang Nan Yun, for instance, had been one of the Beijing Opera's most talented and beautiful stars of the 1950s, but in the prime of her career the Cultural Revolution brought it to a premature end. In Xue Qing Hua's case, her film role made her a nationally recognized superstar overnight, but her alleged ties to the Gang of Four during Madame Mao's fall ruined her career, and she was reduced to working as a seamstress. The climax of the film has the dancer triumphantly revisiting her role in a new stage production.

Yang Ban Xi looks as if it might have been expanded from a shorter, earlier work, or perhaps revised for its release in America. This might account for some problematic transfer issues (see below) and for its unconventional aspects. One of these involves the decision to have an actress impersonate the voice of Madame Mao who, from time-to-time, defends her brutal policies or directly responds to comments made by the interviewees. This creates an interesting effect, but since (apparently) her words aren't lifted from real transcripts and the like, the impact of this device isn't nearly as effective than the actual footage of Madame Mao that's used near the end of the documentary.

More bizarrely, at one point Yang Ban Xi becomes a full-blown musical itself, with a hip-hop adaptation of one the songs is played out in the form of a music video. One supposes this was done to demonstrate the enduring popularity of the music and its pliability into other music genres, but it comes off as little more than a bemusing digression.

That Yang Ban Xi was expanded from a shorter work is in evidence throughout. Presented in 1.78:1 enhanced widescreen, the bulk of the picture was shot on some form of digital video and is likewise 1.78:1, with the archival clips 1.33:1 within the widescreen frame. However, some of the footage is awkwardly transferred; it looks like it was shot on video though made to resemble grainy film stock. It appears as if that was shot full frame and reformatted to 1.66:1 widescreen (with black bars on the left and right of the image) with the image slightly squeezed as well. Unfortunately, somehow in reformatting the bottom line of two-line-tall English subtitles drop right off the bottom of the screen, effectively slicing them in half. You can still read them, but the effect is singularly awkward. Fortunately, this weird formatting problem amounts to only about 5% of the film. (There are also other sloppy editing mistakes, where text font will change or an image from a stray shot will appear for a frame or two.)

There are no complaints about the Dolby Digital Stereo, which is robust and really adds to the excitement of all those great film clips.

The only supplement is a trailer and a modest image gallery.

Despite its weird video glitches and arguably misplaced musical tangent, Yang Ban Xi is, like its forerunner East Side Story, a fascinating document of a movie genre engrained in the minds of virtually all Chinese around during the Cultural Revolution, but which has remained all but unknown in the west. Highly Recommended.