While to some what takes place in Die Bluthochzeit a.k.a The Wedding Party (2005) might seem ludicrous but exciting, for plenty of reasons, to others it would probably be a familiar song. Well, there isn't any singing in this film, that's for sure!!

On a secluded chateau somewhere in the German countryside a couple is soon to be married. Escorted by their families and friends Mark (Arne Lenk) and Sophie (Lisa Potthoff) are excited to begin what they believe will be a fascinating journey. Upon arrival at the chateau all guests are seated at a large table where plenty of food and drinks will be consumed. The host greets the couple and their guests!

But when the father of the groom is told that the shrimp cocktail may not have been prepared properly all hell breaks loose - he quickly demands an apology from the Chef who in return passionately defends his integrity! The groom's father goes berserk proudly announcing that the wedding celebration is off. On the way out however no one notices that the bride and the groom's mother have been left behind. The Chef sees an excellent opportunity to demand a partial refund for all the food that will be wasted. Logically a hostage situation is created.

Realizing what has happened the groom's father mobilizes the rest of the family declaring that honor must be defended. 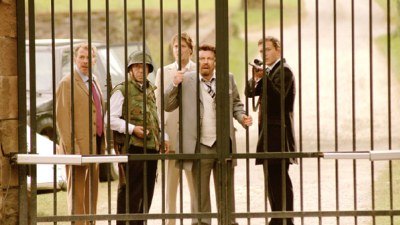 It is difficult to tell how serious The Wedding Party is about what it strives to achieve! There is plenty of dark humor, sarcasm, and well-calculated jabs at traditional status quos here yet the picture's generally amateurish look often crosses that delicate line where humor isn't funny! It is banal! Even worse when you can't see the reasoning behind a lot of what is taking place on the screen something must be off!

Apparently the biggest draw the picture offers, certainly for German-Belgian audiences, has to do with the fact that it is based on a hugely-popular comic book by Hermann & Van Hamme (refer to Flanders-Image). So, not surprisingly there are themes here that foreign audiences will find difficult to appreciate.

On the other hand what should be obvious to enjoy is hardly as original as one might have hoped it would be. The Wedding Party is at best a semi-original serving of The Adams Family, sprinkled with a bit of The Royal Tenenbaums, and spiced-up with a touch of Vonnegut-esque bravado. Surely this is a tasteless mix to say the least.

However, if willing to be taken on a mindless trip where logic isn't necessarily required then by all means you may find Dominique Deruddere's work rather comfortable to swallow. There are some interesting twists here that will put a smile on your face and the groom's father's eccentricity occasionally may raise an eyebrow or two. When all is said and done however The Wedding Party is far from being a cinematic masterpiece deserving to be praised! 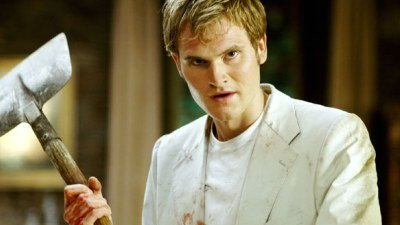 Presented in its original aspect ratio of 1.85:1 and enhanced for widescreen TV's the print provided by TLA Releasing has clearly sourced from a PAL-master. Therefore, the mandatory for such transfers issues are obviously present here: ghosting and combing are evident throughout. Furthermore, the picture is soft, contrast slightly above-average (the night scenes are especially problematic), and colors far from convincing. In fact, the bigger the screen you use to watch your films the worse will be the issues described above. This being said, I did not detect any print damage (debris or specks) and the actual quality of the master appears to be in healthy condition. It is unfortunate that TLA Releasing continue to produce interlaced transfers!

Presented with a German 5.1 track the audio is of good quality. Dialog is easy to follow and I could not detect any issues of concern. The rear channels get a decent amount of workout and as far as I could tell there aren't any distortions (hissing or dropouts). Optional English subtitles are provided for the main feature.

Aside from the original theatrical trailer and a gallery of trailers, a total of four, for TLA catalog titles there is nothing else to be found on this disc.

Surely some will find The Wedding Party to be a fascinating watch! I did not!! Despite of a few worthy of recognition scenes there isn't much here you haven't already seen. Done substantially better! A look at the Danish Festen a.k.a The Celebration is undoubtedly a better choice!