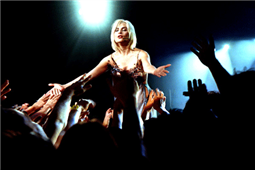 Lucie (Isild Le Besco, A tout de suite) lives far away from the hustle and bustle of Paris worshiping her idol pop-singer Lauren Waks (Emmanuelle Seigner, Bitter Moon). She is unaware that her mother has arranged to have the superstar perform a song in their home as part of a reality-show which will be broadcast live. So, when lights begin flashing at Lucie's home she bursts in tears. The girl runs away leaving everyone confused. After the show, in an attempt to calm Lucie down, Lauren Waks invites her fan to spend a day with her in the city.

Amazingly Lucie takes the star up on her offer – she runs away from her mother and eventually settles down in Lauren's hotel. Like a puppy Lucie follows Lauren everywhere she goes, the studio, the restaurants, the press briefings. She even manages to get closer to Lauren's ex-boyfriend. All of a sudden a world Lucie has only seen on TV becomes a pulsating reality!

Far more revealing than suggestive Emmanuelle Bercot's Backstage (2005) goes where plenty of reality-based shows look for inspiration – the world of those accustomed to worshiping. In this specific film the object of idolization is a pop-star who leads a life full of controversy. In fact, the moment Lucie steps into Lauren's world it becomes evident that the superstar is not the person her fans admire. She is a spoiled, unfocused, and emotionally battered woman with an uncertain future.

Surprisingly, as soon as the viewer is introduced to Lauren and her intimate world Bercot turns around and focuses her camera on Lucie. All of the drama surrounding Lauren – the drugs, lovers, and failed hits – becomes a foundation for the unexpected transformation Lucie will undergo. The once shy and easily intimidated girl becomes a bold and brash woman willing to fulfill her desires no matter what the price.

This is where however Backstage becomes impotent. The much suggested great conflict between Lucie and Lauren, inspired by a half-believable love affair, creates a ripple effect of unpersuasive scenes culminating in a clichéd finale with few if any redeeming qualities. Instead of going deeper into Lucie's world where supposedly admiration and frustration have merged together Backstage veers off in a familiar direction leaving the viewer wishing for more. 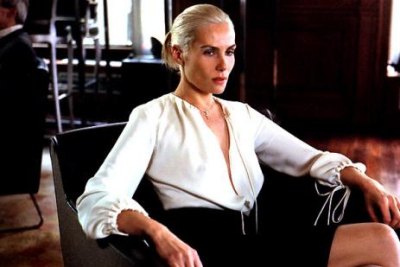 On a positive side both Isild Le Besco and Emmanuelle Seigner are absolutely fabulous as the characters they play. Seigner does an admirable job as the spoiled but weary superstar whose glory days are numbered. Scene after scene she grows increasingly delusional until a horrific act brings her back to reality. On the other hand Isild Le Besco's performance is so convincing that even with the numerous issues described above Backstage provides a curious angle to the ever so publicized relationship between stars and their fans.

Presented in its original aspect ratio of 1.85:1 and enhanced for widescreen TVs this appears to be yet another PAL-NTSC port. At this point I pretty much have said all I had to say regarding Strand Releasing and their discs so there is no need to beat a dead horse here. The image does reveal more than a few minor issues ranging from the presence of "ghosting", unstable color-gradation, and less than satisfying contrast treatment to hazy image during the night scenes. On a positive side there isn't any print damage that I need to report here and it certainly appears that the PAL master the R1 distrib used was in great condition. This anything but exonerates the company-producer and their less than satisfactory conversion.

The French TF1 produced disc arrives with a bombastic DTS track, this R1 produced affair does not! All we have here is a basic French 2.0 track which notably undermines the rich soundtrack. There is plenty of activity in this film and the performances are quite well done (the stage fragments are great). So much to my dissatisfaction I must state that the disc fails in this department as well. The forced English subtitles only further solidify what has been said above!

Aside from the theatrical trailer and a gallery for other upcoming Strand discs there is nothing else to be found here.

Well, here we are again! Another Strand DVD, another interesting film, another disappointment!! I really am fascinated with what the company has to offer and I do want to believe that one day their output will be of deserving quality. Yet, at this point I am left only with my admiration for their film selection! How difficult could it be to respond to what your customers want you to do? This is not ill-intended criticism, quite the opposite in fact! Sadly, I am forced to give this disc a RENT IT.